Review for The Last Detail by Melissa Schroeder 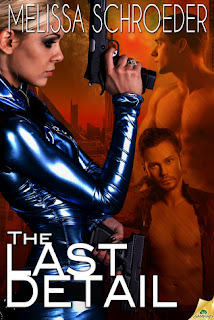 Trust isn’t easy when the ones you want most are out to get you.

Ten years after she ran away from Earth, Lou Campbell is one job—just one more collar—away from earning enough credits to go home. All she has to do is lure Sam Dawson within range of her handcuffs with the promise of fast, hard sex. Easy.

Once she gets him there, keeping her own hands off him isn’t so easy.

Sam’s committed his share of sins, but he’s not guilty of selling secrets. Before he can convince the sexiest bounty hunter he’s ever seen that he’s been betrayed, all hell breaks loose. And he’s on the run with a false accusation on his hands—and a bleeding woman in his arms.

When Jared Flores walks in on his best hunter and ex-lover in bed together, the surprise is mutual. Worse, the need he has long felt for both of them overrides his better judgment. After the fists fly, the sparks catch fire into a budding three-way romance.

Then Sam disappears, leaving Jared and Lou in a race against time to not only retrieve their lover, but save his life.


***************
As a fan of sci-fi television I found this novella to be just as entertaining as any episode of my favorite shows.  There were great action scenes with an intriguing view of a future world with all the corresponding technology.  I found myself quickly drawn in to the society Ms. Schroeder created and hated the story to end.
The characters in this story came from varied backgrounds but all experienced hardships along the way.  It's created a bond between them, one you can sense the moment they all come together.  The characters are strong, both mentally and physically, and I found myself invested in their outcomes.  They're likable people trying to make do the best they can while retaining their code of ethics.
Lou Campbell is the epitome of a sci-fi heroine, capable of kicking butt with a bit of baggage that gives her a tough exterior.  Because of past experiences she doesn't trust men.  She's frightened by her intense attraction to fugitive Sam Dawson, the man whose bounty will get her back home, but can't stop herself from wanting him.  Their interactions are fun and sexy with both of them radiating confidence.


Sam and Jared Flores have a history, one you don't know about until the latter half of the story.  The connection between them is immediately present upon their reunion though.  As much as they're still attracted to each other they're equally attracted to Lou and seeing them vie for her attention is both humorous and sexy.  They're both manly and offer Lou protection as well as strength and I found them to be the perfect match for her.  Once they all came together their sexual interludes were intense and nicely spaced throughout the story.
Very little time was spent on the actual mystery.  This aspect of the story was the weakest part and could be seen merely as a device to bring the lovers together.  It's a shame since I was intrigued by the small snippets of political intrigue presented.
This was a short story long on entertainment.  The romantic aspects were perfectly balanced amongst the high octane action and I found myself ripping through the pages on my way to a very satisfying conclusion.  This is my first time reading a sci-fi based story by Ms. Schroeder but it definitely won't be the last.
My rating for this is a B+
*I received this book from the author in exchange for my honest opinion.
at September 07, 2011