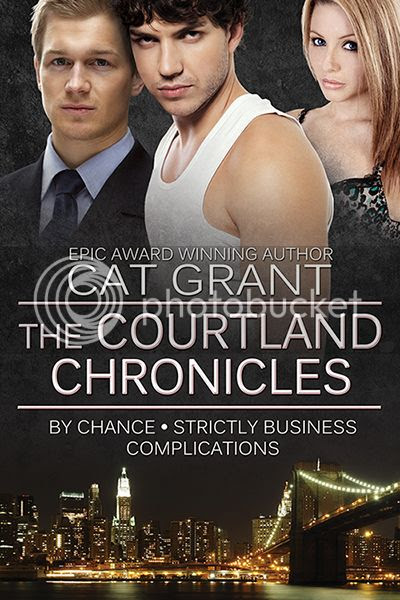 Niiiiice cover, huh!!!
The other day somebody asked me if I had a guilty pleasure – and I thought, “Geez, I only get one?”
I could say it’s curling up on the couch with my cat on my lap sipping tea (or wine!) while I watch my favorite TV show. (Supernatural, Vampire Diaries, Spartacus, Downton Abbey, The Walking Dead – take your pick!) Or mainlining whipped cream right out of the can. Or heading out to Sea Harvest for a bowl of their decadent salmon bisque…

Or writing another story featuring one of my favorite tropes. Looking back on all the stories I’ve cranked out since 2008, it’s a tossup between “gay for you” and “friends to lovers.” Or “bad breakups.” (And if that’s not a trope, it should be!)
The “friends to lovers” trope resonates with me because that’s how my late husband and I got together. We were good friends for about ten years before we became romantically involved –kinda like When Harry Met Sally, only without the snappy one-liners. (Or simulated public orgasms in Jewish delis…)
In By Chance I did kind of a “gay for you/friends to lovers” mash-up. In my new novella Complications I do the same thing, only with “bad breakup/friends to lovers.” It’s about time my kick-ass heroine Ally Taylor had her turn in the spotlight. (Read the blurb below and you’ll see what I mean.)
We’re heading into ménage territory – another one of my guilty pleasures. So strap in – it’s about to get bumpy. J

Tired of taking a backseat to his lover Eric Courtland’s burgeoning political career, Nick Thompson decides to call it quits. A devastated Eric seeks consolation in liquor—and the arms of his and Nick’s college friend Ally Taylor.
Their passionate rebound affair quickly deepens into something more. Still, Ally’s thrown when Eric proposes marriage. His wealth and connections would help her career, but is their intense physical connection and Eric’s promise of fidelity enough?
Ally soon finds herself falling for her husband—and he for her. But the growing bond between the newlyweds is threatened when Nick re-enters the picture. Secrets, lies and betrayal will add up to heartbreak for everyone—unless Eric can bring himself to choose between the man he’s loved for over a decade, or the new wife he can’t bear to hurt.

Now available on Kindle, All Romance ebooks, and Nook. Coming to Kobo shortly!

The path to a HEA for Eric and Nick continues to be rocky as political aspirations have led Eric to make choices that are devastating to Nick and the love they have for one another.  Nick in turn, and out of anger and spite, does something equally as hurtful and they're once again left living separate lives.

Enter good friend to both men, Ally, who's down on her luck and reconnects with Eric in a BIG way.  Reeling from loneliness, Eric latches on to the only remaining person in his life that he feels he can count on.  They're relationship starts out super steamy and they seem very compatible.  They both benefit from being together in that he can help her in her career and she is the perfect arm candy for a future politician.  She expects his fidelity which he truly believes himself capable of but the specter of Nick constantly hangs over their relationship.  As a reader, I felt that Ally was merely a pit stop for Eric.  He hates to be alone and he caught her in a moment of need and weakness.  Their marriage feels like a business with really great benefits as the sexual encounters between them are numerous and super steamy.  Their connection is apparent but feels one-sided and superficial as time went on.

Those who hate cliffhangers will find themselves screaming at the end of this as an unexpected encounter very late in the story leads to a game changing view of the future.  This trio is full of damaged people who continually hurt one another which makes them unlikable from time to time.  When you just KNOW two people are meant to be together it becomes frustrating the longer their stupidity keeps them apart.  At the end of this story I again wanted to smack Eric and Nick alongside their heads.

Cat Grant's series continues to keep me engaged as I've become fully invested in Nick and Eric's outcome.  I might not always like their actions but I still want them to achieve their HEA as fate has been unkind to them long enough.  After all the pain they've put each other through they've earned peace and happiness and I'm anticipating what the next book brings!

My rating is a B.

*I received this book from the author in exchange for my honest opinion.

Hello! Thanks for joining me on my mini-blog tour for Complications, the third book in my Courtland Chronicles series. Leave a comment and you just might win a signed paperback copy of By Chance, Strictly Business and Complications, the first 3 Courtland books!  ENDS AT 11:59 PM CST ON 2/2.
at February 02, 2013