It’s a battle over what one man thinks he wants and what he actually needs in this historical romance of opposites attracting when a laird is forced into marriage.  Keep reading to get a tempting glimpse of The Laird Takes a Bride by Lisa Berne, and get even more tempted by visiting the other sites hosting this tour, then add this romance set in the Highlands to your bookshelf.  In honor of this romance full of sexual tension make sure to fill out the form below for three winners to have the chance to win a copy of this book too! 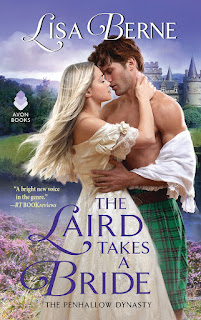 Alasdair Penhallow, laird of his clan and master of Castle Tadgh, is forced to end his carefree bachelorhood, thanks to an ancient decree that requires him to marry. But Alasdair’s search for a biddable wife comes to a screeching halt when Fate serves up Fiona Douglass. Prickly as a thistle, Fiona challenges him at every turn, rendering herself surprisingly irresistible. Her love would be a prize indeed . . . if Alasdair could accept it.
Fiona gave her heart once, and doesn’t plan to repeat that folly. Yet she finds herself drawn to Alasdair’s intelligence and strength, and the passion he incites goes well beyond her expectations for what’s only a marriage of expedience. Despite herself, she’s falling in love with her husband.
But there’s a high wall between them—and Fiona’s not sure it can ever be torn down.

Fiona had never told Nairna that. She knew that seventeen-year-old Nairna was madly in love with Logan Munro, and as for Logan, who could fault him for preferring sweet Nairna Douglass, as soft and playful as a kitten, petite and rounded in all the right places and with masses of dark curls that framed her piquant little face most fetchingly? Who wouldn’t prefer Nairna to Fiona, at eighteen painfully thin and gawky and oversensitive, who blurted things out and tripped over her own feet? Especially since, at that moment in time, Nairna’s dowry had been substantially greater than Fiona’s.
It all made total sense.
Even back then, in the darkest period of her devastation, Fiona hadn’t been able to summon resentment or hostility toward Nairna, whom she had loved — still loved — with the fierce, protective devotion of an oldest sister for her younger siblings.
To be sure, there was a secret part of her, a sad and cowardly part, that would have driven her far from home on this lovely summer’s day, where she wouldn’t be forced to look upon Logan Munro’s handsome face, but to this desire she hadn’t succumbed; wild horses couldn’t have kept her from attending Rossalyn’s wedding. She had, though, slid inconspicuously into the very last pew. She did this also as a kindness to her fellow guests. Even with her hair twisted into smooth braids, all coiled together and set low on her nape, she was so tall that she could easily block the view of others behind her. Nonetheless, and thanks to her accursed height, she could plainly see Logan where he sat, several pews away, next to Nairna.
Logan’s hair was still black as a raven’s wing, still thick. His shoulders were still broad and heavily muscled beneath the fine mulberry-colored fabric of his fashionable coat.
And, Fiona realized, a heart could still physically hurt, could ache painfully within one’s breast, even after nine long years.
She made herself look away from Logan.
Instead she gazed down at her hands, loosely clasped in her lap. Hands that weren’t white as they ought to be, fingers that were a little coarsened by riding without gloves, by long hours working in her garden.
Around her slim — the less charitable might even have said bony — wrist was looped the silken cord of her reticule.
Surreptitiously Fiona loosened the opening of the reticule and pulled out a small piece of paper, quietly unfolding it. On it she had written her latest list.
Ask Dallis — when new baby due?
Avoid Logan
5 sheep with bloody scours, 2 with rupturing blisters — why?
Help Aunt Bethia find her spectacles (bedchamber? solarium?)
Avoid Logan
Avoid Cousin Isobel, too
Mother’s birthday next Saturday
Tell Burns — STOP cutting roses too early
Avoid Logan
Avoid Logan
Fiona withdrew a small pencil from her reticule and added another item.
Stop thinking about Logan. 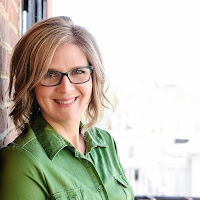 Lisa Berne read her first Georgette Heyer book at fourteen, and was instantly captivated. Later, she was a graduate student, a grantwriter, and an investment banker, but is thrilled to be returning to her roots and writing her own historical-romance novels! She lives with her family in the Pacific Northwest.

a Rafflecopter giveaway
at September 25, 2017