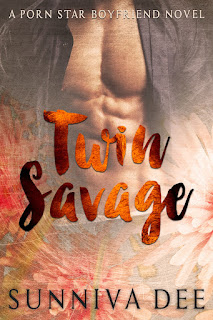 How does a good girl end up with a different lover for each night of the week?
It wasn’t a problem to be the only girl in a house full of guys.
Until my fiancé died and his identical twin took over the roost.
Sweet, easygoing Julian passed, while loathsome, bossy Luka, who pays his way through med. school by getting his dick wet on film, is still alive.
What kind of twisted reality is this?
Now, Luka’s on a mission to fix both of our grief.
Like I’d ever accept anything from him.
He doesn’t understand that gorgeous and sexy mean nothing if you’re a promiscuous jerk.
If only the nights didn’t destroy me.
They’re painful and long and empty, until, on a Monday night, my insomnia attracts Diego.
That Tuesday, it attracts Lenny.
Next, it’s Marlon, James, Nathaniel. and on Saturday, it’s Connor.
By Sunday night, I get the picture.
This is Luka doing what Luka does: solve problems with sex.
His remote-controlled comfort leaves me in our roommates’ arms six of seven nights.
On Sunday, there’s only one man left in the house.
But there’s no way in hell I’m opening my door—or my heart—to a porn star.

MY SEVEN MEN
I have a small freak-out on Tuesday night. Lenny’s night. When I enter the Queen an hour late, they’re all waiting for me with Lenny spearheading them in the hallway. He smells like heaven. But then there’s Marlon behind him, a bit taller, eyes burning on me like he has plans too. So that’s why I tell them at dinner, fork and spoon pointing at the ceiling, “You guys better not get any ideas.”
I tip my fork forward like I’m about to skew a few of them. Marlon, for instance, with his neon-sign stare broadcasting how he’d rather not wait his turn.
“I’m not into threesomes. Or foursomes or fivesomesor anything like that.”
“Ba-a-be.” At least three of them exclaim this in mumbled what-’r-you-talking-about voices as if they’re all my boyfriend and I’m being ridiculous. You know what’s ridiculous? This arrangement.
“I’m serious! Just because I’m happy with one of you at a time doesn’t mean I’ll ever want to be... invaded by several of you at the same time.”
James has the decency to look shocked, and so does Nathaniel. The only one looking positively unimpressed is the one I haven’t slept with. Luka’s classic features are perennial ice/the Siberian tundra. Even so, he’s the one speaking up.
“No one would do that to you.”
“Really? Because I didn’t ask for anyone to come to me in the first place. You guys just came. So consider this a clear message: don’t ever misinterpret my body’s reactions into believing I’ll accept more than one of you at a time.”
Several pairs of eyes run over my body before slinking away.
“Got it,” Marlon says. That’s good, because he looked too hungry for a Not-Wednesday. I wonder if he has other girls. He must, right? He was with Sheena for a couple of years, but they broke up a few months before Julian died.
James pushes the pan of meatballs toward me, jutting his chin for me to serve up. “Stop worrying, beautiful. We’re not a bunch of animals. Personally, I like my girls open and receptive and… wanton.” He makes his brows dance.
Lenny lets out a snort, rolling his eyes.
“Jesus, the stuff coming out of your mouth,” I mutter, feeling a smile grow on my face.
“You were alone,” Luka cuts in, ruining my budding mood lift. “You needed someone. That’s why we do what we do. But biologically, no woman actually needs more than one man, so that’s what you get, one guy comforting you at a time.”
“‘We,’” I mock. “Like you’ve ever consoled me.”
Silence. The others look away. Yellow ice sparkles into me, but I don’t avert my stare. Finally, he opens his mouth, tight lines settling as he says, “Right.” 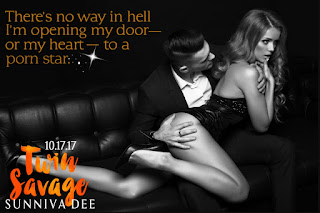 Sunniva is a reader, a lover of everything beautifully written no matter the genre.
As an author, she pens flawed characters and seeks the flip side where the soul hides. Once there, Sunniva wants to be pulled out of her comfort zone by stories taking on a life of their own.
She has written paranormal and young adult. She's done contemporary romance verging on erotica and dabbled in supernatural mystery. But Sunniva's heart is rooted in new adult of the true kind: young adult all grown up, with conflicts and passions that are familiar to college-aged readers and us who remember those days like they happened last night.

a Rafflecopter giveaway
at September 25, 2017