A woman working to make her dreams come true finds herself attracted to her rough and sexy neighbor in a tale full of danger as this single dad struggles to keep his family, and the one woman to brighten their lives, safe.  Keep reading to get a tempting taste of Two Hearts Born to Love by Debra Kayn, then add this MC-fueled romance to your bookshelf.  In honor of this third installment in the Choices: Tarkio MC series make sure to fill out the form below for the chance to win a $100 Amazon GC too! 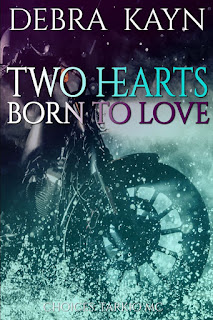 After her grandpa dies and she inherits the apartment complex, Joey Farran spends her time between fantasizing about the sexy, rugged, toolbelt-wearing biker who lives a few doors down from her and playing pool at the local bar on Friday night, hoping to raise enough money to enter the Blackfoot Tournament at the end of the year. Her two favorite things never mix until Wyatt shows up at Riverside Bar, gets drunk, and takes her back to his place. He’ll never remember their hookup, so what’s the harm?
Finding himself a full-time dad to his two teenage kids after his ex-girlfriend dies, Wyatt Carr’s life is a chaotic mess. His son keeps running off. His daughter is afraid of losing another parent. He’s working long hours running Carr Construction, spending sleepless nights on the couch, and his kids survive off eating pizza every night.
Just when he feels he’s barely hanging on, Wyatt finds Jess and Travis in the manager’s apartment eating spaghetti dinner...and the sexy, new owner of the apartment complex looks vaguely familiar.
Thinking his dark days are behind him, Wyatt is unprepared for the threats against his family. The only way he can hold it together is with the help of Tarkio Motorcycle Club and the woman who brings the sunshine to all their lives.

A woman walked around the wall and toward him. Surprised that an old woman wasn't shuffling to the door, he ogled her stride—enhanced by bare legs and bare feet. His gaze traveled up her body to a half-shirt football jersey that hid nothing. If she shifted and raised her arms, he'd be able to see the swell of the underside of her breasts peeking out from the bottom of the shirt.
"Hello," said the woman.
He raised his gaze to her face. Caught off guard, expecting someone else, he stared. She looked familiar, but if he knew her, he would've had her. There was no way he'd let a woman looking like that walk away from him.
He held out his hand. "I'm Jess and Travis's dad.”
She hesitated and then rushed to shake. "Joey.”
"Joey?" he murmured, tilting his head. "Do I know you?”
"We…" She looked over her shoulder into the apartment, then faced him. "No.”
He grunted, unable to stop staring. She was wrong. In a few minutes, he'd figure out where they'd met before.
"The kids are welcome to stay for dinner." She hooked a strand of blonde hair behind her ear. "I can't make a small amount of spaghetti to save my life. There's more than enough.”
"Nice of you." He gazed at her blue eyes. "Send them home when they've helped you clean up.”
"Oh, that's not necessary." She inhaled deeply and raised her brows, waiting for him to either continue the conversation or leave her alone to get back to the kitchen.
Because he still hadn't figured out where he'd met her before, he said, "Are you the daughter of the manager?”
Her gaze softened. "Granddaughter. My grandpa passed away almost seven months ago. He left me the apartments, and I decided to move here and manage the business.”
"Sorry to hear about your grandpa." He cleared his throat, understanding why his kids were drawn to her.
Joey wasn't much younger than their mom had been. Not that their mom ever had a soft touch and sweet words for them to grow on. His ex-girlfriend tended to be loud and selfish. He could definitely see why the kids were excited to eat dinner with Joey.
"I'll let you get back to dinner." He stepped away. "Thanks again.”
"You're welcome," she said softly, then closed the door.
He looked back at the apartment. Dayum.
His kids were the lucky ones tonight. A pretty woman. All her attention. Eating with Joey was probably the best thing they'd gotten to do in a long time. 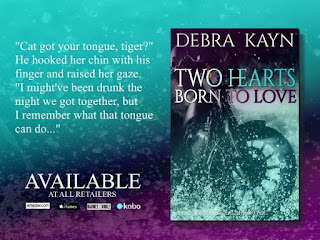 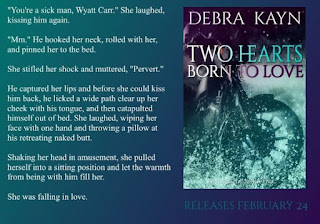 Debra Kayn is published by Grand Central Publishing, Simon & Schuster Publishing, Carina Press – Harlequin Enterprises Limited, and repped by agent, Stephany Evans of FinePrint Literary Management.
Believing everyone deserves to love and be loved, she takes the most unlikely characters and turns them into heroes and heroines.
She lives with her family in the Bitterroot Mountains of beautiful North Idaho where she enjoys the outdoors, the four seasons, and the wild animals that gather in her yard.
WEBSITE  |  FACEBOOK  |  TWITTER  |  GOODREADS AUTHOR PAGE  |  AMAZON AUTHOR PAGE  |  INSTAGRAM  |  BOOKBUB

a Rafflecopter giveaway
at February 26, 2020