A self-made man accustomed to getting what he wants runs into a formidable woman who leads him on a sensual chase full of fireworks.  Keep reading to get a tempting taste of Dominik by Sawyer Bennett, along with my impressions of it, then add this just-released romance to your bookshelf.  In honor of this sixth installment in the Arizona Vengeance series make sure to visit the link below for the chance to win a signed copy of this book along with a selection of swag items inspired by the hockey team featured in this series too! 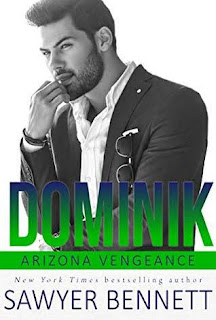 I built myself up from nothing. A product of the foster care system, I learned early on how to fight hard to get what I want. Whether it was starting my first company in college, earning my first billion, or buying my first professional sports team, I know how to get what I want, when I want it.
Until now.
Willow Monahan is fierce, independent, and hot as hell. She also takes great pleasure in shutting down my advances. The younger sister of one of my star players, Willow intrigues me to my very core. And while she may have willingly given me her body, she is hesitant to offer up more. Now I’m on a mission to find out why.
I’ve decided to approach my desire for Willow like I’ve approached much of my life; with persistence, determination, and a whole lot of that Dominik Carlson alpha charm. Buying a hockey expansion team, building the Arizona Vengeance from the ground up, and bringing home a championship may prove to be an easier feat than winning Willow’s heart.
But I’ve never been a quitter.
Willow Monahan...I’m coming for you. 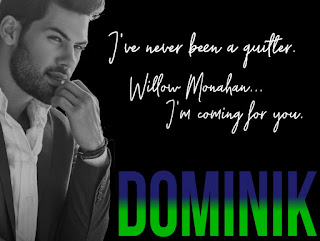 The Arizona Vengeance series has entertained me from the very first installment to this crackling new release courtesy of its combustible main couple and a supportive and immensely likable cast of secondary characters.  Throughout the five previous releases readers have gotten a tantalizing glimpse of Dominik, the rich team owner with a heart of gold, and it’s this tale that has him taking center stage as his heart gets led on a merry chase by the sister of one of his star players.  By the turn of the final page readers will be exhausted but satisfied by all the ups and downs that came before and ready for more players to hit the ice in the future.

Dominik Carlson was orphaned at a young age but it made him the successful man he is today, a diligent man who doesn’t take no for an answer.  His persistence has made him a rich man as owner of the Vengeance hockey team and it will further come in handy as he’s forced into chasing after Willow in an attempt to prove his love and commitment to her.  Dominik is a drool-worthy hero who would do anything for his players, subtly helping them find their HEAs with each new installment.  He exudes strength, but behind that facade is a man with a heart of gold and I found that side equally as sexy.  The moment he met Willow he was intrigued by her and in each book their romance has taken yet another small step forward.  Throughout this story though she lets fear hold her back and theirs ends up being a romance full of push/pull moments that frustrated me a time or two.  Despite that, Dominik continues to show his sweet and sexy side which has me dreaming of him still.

Dax’s sister, Willow Monahan, made a lasting impression on me in Ms. Bennett’s Tacker as she constantly turned Dominik down in their battle of the sexes.  He may not be used to being challenged but she loves pushing his buttons.  She’s a confident and strong-willed heroine who loves the thrill of her job and the ability to travel at a moment’s notice. She’s not the kind of heroine to be tied down, but she certainly enjoys her short-term fling with Dominik.  Though he wants forever, she’s been burned one too many times, and as the story progressed, her stubbornness became frustrating at times in a sizzling romance that I rooted for every step of the way.  The more Dominik felt challenged the harder he fought to prove himself to her and the more I fell for him.

Fans of sports-fueled romances will find themselves quickly captivated by the Arizona Vengeance courtesy of the larger-than-life players and the action both on and off the ice.  i enjoyed seeing past players and getting an update on their HEAs and this glimpse had a familial feel to it that had me gobbling up the pages.  This installment gives readers an entertaining couple and a combustible connection that put readers on a rollercoaster ride teeming with sensuality.  Add in a bit of suspense during the playoffs and readers will be further immersed in this hockey world and counting down the days until the next player steps on the ice. 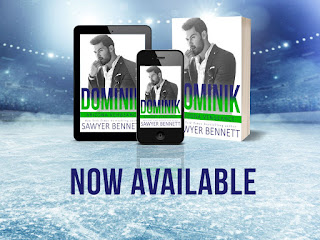 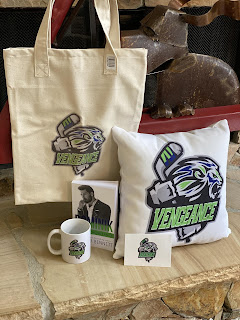 VISIT here FOR THE CHANCE TO WIN A PRINT COPY OF THIS BOOK ALONG WITH AN ARIZONA VENGEANCE TOTE, STICKER, MUG, AND PILLOW.  GIVEAWAY ENDS ON 2/25.
at February 18, 2020