Book Tour for Inmate of the Month by Lani Lynn Vale (REVIEW)......

A man with a life full of complications finds himself unwillingly drawn to a woman with a kind heart who sees only the best in him in this emotionally intense contemporary romance.  Keep reading to get a tempting taste of Inmate of the Month by Lani Lynn Vale, along with getting my impressions of it, then add this seventh installment in the Souls Chapel Revenants MC series to your bookshelf! 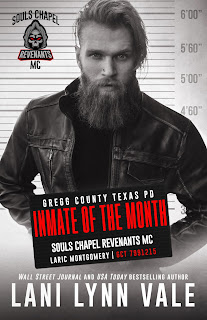 A porn video changed his life.
One second, he has an ex with an ax to grind, and the next, he’s internet famous—and definitely not in a good way. In an, it’ll ruin your career, kind of way.
Only, Laric didn’t know that he was internet famous.
Not until a black-haired beauty walks into his life, and stumbles over every word that she says because all she can picture is him doing the unthinkable for the world to see.
Sadly, that’s not the only thing wrong in his life. His world is messed up, and he likes it that way.
There’s no room for a woman that wants to fix him.
Because fixing requires intimacy, and intimacy isn’t something that Laric does. Not after the life that he’s lived, and the things he’s done to survive. Oh, and let’s not forget the fact that he’s a felon, and he has no regrets about how he got that title.
The last thing he needs in his life is a woman that has her head in the clouds and thinks this world is made of butterflies and confetti.
However, Catori isn’t who she seems.
The day she meets tall, dark, and handsome, he saves her life. And then never leaves—though not for his lack of trying.
Not that she’s complaining about the way they’re thrown together, time after time. She’s more than willing to have a man like Laric around. Mostly because she’s already seen the good in him that he refuses to admit that’s there.
He may be a biker that does questionable things, but in her heart, she knows that he does those bad things for good reasons. And she’s not about to throw away the chance at happiness just because he thinks he knows what’s best for her.
Plot twist: she knows what’s best for her. And that’s him. 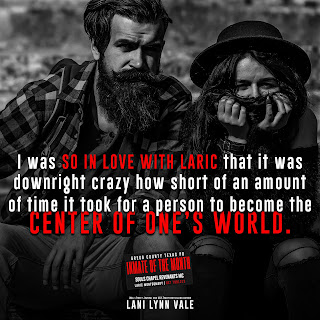 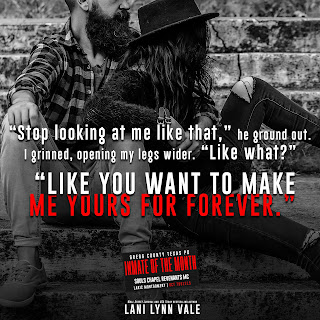 MY IMPRESSIONS OF THIS BOOK:
When it comes to quick yet satisfying reads Lani Lynn Vale has become a go-to author for me with her appealing characters, crackling dialogue, and a storyline that burns up the pages while putting a smile on my face!  Ms. Vale’s latest release is yet another winner that grabbed me from the very first page, while I held on tight through the rest of this romance of sizzling interactions and heartfelt emotions.
Laric has been a tempting morsel since the very first installment of the Souls Chapel Revenants MC series, a sexy hero with a painful past that’s slowly revealed throughout the pages of this book.  He has a rock hard exterior rippling with muscles, a decadent exterior that belies a hidden heart of gold, a heart that knows what it wants once it sees Catori.  Laric’s the kind of hero you can’t help but be drawn to as he’s a delightful balance of sexy and sweet, a hero who makes you melt through his determined focus on winning over Catori.  Catori’s an entertaining heroine, a heroine with a big heart and a painful past that’s slowly been revealed throughout this series, starting with the loss of her twin in the womb.  She’s been unlucky in love too, which was the basis for this book as being shot by her ex is what puts her in close quarters with Laric from the very beginning.
This was a decadently delightful romance from the very first page to its flawless epilogue.  In between readers are given fun and flirty dialogue, exhilarating moments of action and suspense, and an insta-romance that held me captive in its entertaining embrace!  Ms. Vale continues to entertain with this next installment in a near-perfect romance series set in th MC world, a series that gives readers glimpses of one delicious hero after another that have me counting down the days until the next release!
My rating for this is an A.
*I got this book from the author for review in exchange for my honest opinion.

AUTHOR INFO:
Lani Lynn Vale is a Wall Street Journal & USA Today Bestselling Author of over thirty titles. She is married with three children, two dogs, two cats, a donkey, and a couple (a couple also meaning over twenty) chickens.
When she’s not writing, you can find her curled up in her favorite chair reading. Lani is married with three children and lives in the Great State of Texas.
WEBSITE  |  FACEBOOK  |  INSTAGRAM  |  TWITTER  |  GOODREADS AUTHOR PAGE  |  BOOKBUB
at September 21, 2021