Readers will be charmed by this romance set in the sports world and focusing on an awkward young woman learning dating tips from the man who's been secretly crushing on her.  Keep reading to get a tempting taste of Pressure Point by Claire Hastings, along with getting my impressions of it, then be sure to add this second installment in the Atlanta Rising Football Club series to your bookshelf! 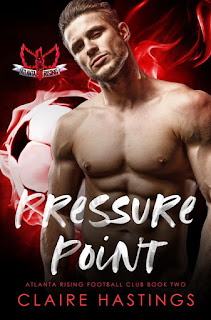 How high does the pressure get inside the friend zone? This goalkeeper is about to find out...
Moving to America forced Liam Daley to leave almost everything behind in Ireland - his family, his team, and his dreams about what might have been. Now on a mission to prove that he's more than second string as a member of the Atlanta Rising Football Club, there's only one thing distracting him: the team's charming and quirky physical therapist, who just happens to be crushing on the hotshot rookie Dash Lazaro.Avery Houghton is living her dream working for the Atlanta Rising. In fact, life would be perfect if she could just score a date with her dream guy. But overcoming her natural awkwardness is unlikely, and her insecurities aren't doing her any favors either. She's desperate for help, and who better to teach her how to attract a football star than another football star?As Avery's reluctant partner in crime, Liam hopes to show her that she doesn't need to change for any man. But simply telling Avery how he really feels seems impossible. While Avery gets closer to everything she thinks she wants, Liam starts to feel the pressure. Will he be forced to pass when he's finally ready to make a play for her heart? 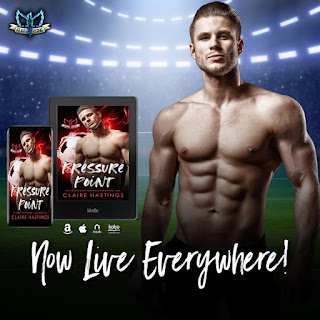 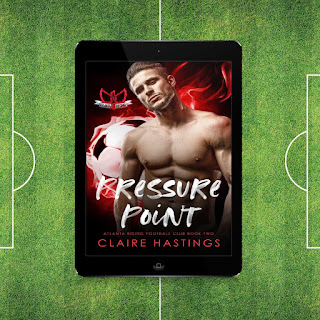 MY IMPRESSIONS OF THIS BOOK:
As a fan of friends to lovers romances I was immediately drawn to the premise of this book, charmed by the two main characters, and entertained by their banter.  Though much of the story was familiar I still enjoyed the connection between Liam and Avery...even though I wanted to shake them a time or two.
Liam Daley's the kind of hero you fall for immediately, an all-around nice guy, a good friend and supportive teammate.  Plus, there's his sexy Irish accent to make him even more drool-worthy!  He's sweet and sexy too but weighed down by insecurities that have him assuming that he'll always be second best.  The moment he meets his team's new PT is the moment he truly wants to be first, but she instead has eyes for his popular teammate Dash.  Because of his good guy nature he offers to help her win the man of her dreams in a journey of friends becoming something more, a slow-burn journey of playful banter, and interactions that become steamier and steamier.  Liam's a delicious hero, almost too nice at times for not telling Avery how he really felt much sooner.  From the outside he seemed rather self-assured, but the reveal of his self-doubts courtesy of an ex made me ache for him and like him all the more for showing his vulnerabilities.
Avery Houghton is a quirky heroine, one who rattles off random medical facts when nervous.  She too is weighed down by self-doubts & negative feelings about her body.  Feeling comfortable around Liam, bonding over their love of Marvel movies, has her reaching out to him to help her unleash her inner sex kitten to win over his teammate.  What ensues is a slow-burn journey of witty banter and a connection that can't be denied as it's clear that these two friends are meant to be more.  I liked Avery for her everyday woman vibe and her quirks, but she frustrated me A LOT.  Dash clearly wasn't interested in her and yet she wouldn't stop chasing, ignoring the good thing right in front of her until it was almost too late.
On a whole this was an entertaining story, a sweet and sexy romance with crackling banter.  The interactions between Liam and Avery grew hotter and hotter with each turn of the page and I was on the edge of my seat waiting for them to finally jump each other.  I enjoyed watching them together and wished the story had just been about them, without the distraction of Dash as I found him rather irritating.  The slow-burn between these two dragged on a bit too long too and it had me screaming at them to wake up more than once during my reading.  I enjoyed seeing Liam's teammates too and am excited for future stories as they all showed themselves to be quite tempting. Fans of sports-fueled romances will find a nice balance of sports and sexiness and I look forward to where Ms. Hastings takes us next.
My rating for this is a B+
*I got this book from the author for review in exchange for my honest opinion.

AUTHOR INFO:
Claire Hastings is a walking, talking awkward moment. She loves Diet Coke, gummi bears, the beach, and books (obvs). When not reading she can usually be found hanging with friends at a soccer match or grabbing food (although she probably still has a book in her purse). She and her husband live in Atlanta with their fur-child Denali.
Follow Claire Everywhere!
at September 20, 2021