Fans of historical romances will find themselves drawn to this tale of two people marrying for reasons other than love who surprisingly end up falling for each other in a rocky road to HEA.  Keep reading to get a tempting taste of You Never Forget Your First Earl by Ella Quinn, then discover even more about this Regency romance by visiting the other sites hosting this tour.  In honor of this fifth installment in The Worthington’s series make sure to fill out the form below for the chance to win 1 of 5 signed copies of this book too! 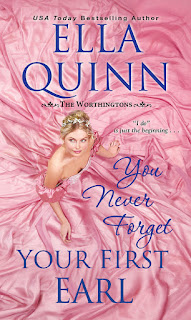 With her three good friends all recently married, Elizabeth Turley is ready for some husband-hunting of her own. One gentleman in particular sparks her interest. Geoffrey, Earl of Harrington is tall, handsome, and dashing. He’s also just a bit too sure of himself. But Elizabeth has observed enough about the rules of attraction to pique the earl’s attention. Yet once she has it, the discovery of a troubling secret taints her future happiness...
Lord Harrington must marry or lose a prestigious position in Brussels, and pretty, well-connected Elizabeth fits his needs admirably. But could it be that he has underestimated his bride? She doesn’t bat an eye in the face of the danger they encounter overseas. She’s strong-willed, intelligent, and more enticing each day—yet also more indifferent to him. Now Geoffrey faces his greatest challenge: to woo and win his own wife, or risk losing her for good...

“It would not be only you pretending you might be interested in me,” Lord Littleton explained. “I would be seen to be interested in you as well.”
This still seemed unnecessary. Either Lord Harrington would want her for herself or not. She did not like to engage in deceptions. “To what purpose?”
“My dear lady.” Lord Littleton possessed himself of her hands, his gaze capturing hers.
Good Lord, the man was dangerous. She sent a prayer of thanks to the deity that she was not affected by him. “Do you do that on purpose?”
He shook his head and stared at her. “Do what?”
Elizabeth narrowed her eyes at him. “Look into a woman’s eyes as if she were the only lady on earth you wished to be with.”
“Ah, no,” he said a little sheepishly. “It just happens. I can’t seem to stop myself.”
“It’s like this, Lizzy”—her brother cut in—“any gentleman who’s interested in a lady don’t wish to see another man making up to her.” He gave his friend a disgusted look. “Littleton agreed to help, but you can see how dangerous it is for him to be in Town. He truly can’t help himself from flirting, and he’ll soon find himself in a bumble-bath if he remains too long. He’s not ready for a leg-shackle yet, but he’d be bound to raise some lady’s expectations and that won’t do.”
“That’s it exactly.” Lord Littleton must have realized he was still holding Elizabeth’s hands and released them. “But that’s not the only reason Turley and I thought I’d be the best one. You see, Harrington and I never got on well together. That will give him the extra incentive to court you properly.”
“And,” Gavin added, “Littleton is so full of juice that he is just as eligible as Harrington. Other than the title that is.”
Her brother and Lord Littleton focused their gazes on her, and she glanced from one man to the other. “I understand.” Or she thought she did. Men were such strange creatures. She wondered why Lord Harrington did not like Lord Littleton. He seemed amiable enough. “Very well, then. How do we begin?”

USA Today bestselling author Ella Quinn’s studies and other jobs have always been on the serious side. Reading historical romances, especially Regencies, were her escape. Eventually her love of historical novels led her to start writing them.
She is married to her wonderful husband of over thirty years. They have a son and two beautiful granddaughters, and a Portuguese Water Dog. After living in the South Pacific, Central America, North Africa, England and Europe, she and her husband decided to make their dreams come true and are now living on a sailboat. After cruising the Caribbean and North America, she completed a transatlantic crossing from St. Martin to Southern Europe. She's currently living in Germany, happily writing while her husband is back at work, recovering from retirement.