Book Blurb Blast for Order Up by Barbara Valentin (GIVEAWAY)

It’s a sweet and sexy war being waged between a woman falling for the cocky chef next door and a chef fighting his attraction after being bruised by love in the past.  Keep reading to get a tempting taste of Order Up by Barbara Valentin, then learn even more about this book by visiting the other sites hosting this tour.  In honor of this fun and flirty romance make sure to fill out the form below for the chance to win a $25 bookstore GC too! 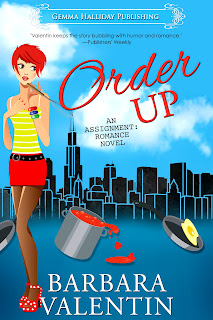 Nancy Braley is the Chicago Gazette's food editor with a taste for hot chefs and talent for replicating their "secret" recipes. But when she finally gets up the nerve to ask out a hot local café owner, Doug Johnston, she's crushed when he says she's not the "marriage material" he's looking for.
Doug is perplexed by his attraction to Nancy whose take-no-prisoners personality reminds him way too much of his cheating ex. To keep Nancy and his conflicted feelings at bay, he throws out the only excuse he can come up with—she's just not marriage material.
Not one to be deterred, Nancy becomes obsessed with figuring out what exactly that means—partly because she doesn't want to emulate her oft-married but divorce-settlement-wealthy mother, and partly because her attraction to Doug is driving her to distraction. So when a married and very pregnant colleague gets put on bed rest until her baby arrives, Nancy volunteers to feed her family, hoping to get a first-hand look at what marriage is all about. And when Doug's ex opens a new coffee shop nearby, stealing business from his café, it's Nancy who comes to his aid! Eager to call Doug's bluff, can she convince him she's the real deal?

Stress oozed from all six-foot-five inches of Doug. His thick shock of short hair went every which way, and his dark eyes bore into her.
"Nancy.”
The emboldened food editor stepped as closely as she could to the counter without hoisting herself on top of it.
The air sizzled with attraction. Either that or there was a short in the adjacent electrified display case.
She set the basket of strawberries she had brought firmly on the counter between them. "These are organic. A gift. For you.”
Nudging it toward him, she added, "From me. To thank you again for salvaging my meringue class.”
When he just stared at her, she pointed to the berry basket olive branch. "First batch of the season. Nice and juicy.”
His eyes stayed locked on hers for just a nanosecond before lowering to the berries. Rotating the basket as he examined them, Doug murmured, "Where did you get these? They look amazing.”
Then he looked back at her. Losing his usual gruff countenance, his eyes were now bright, and his shy smile held nothing but gratitude. Just like when he had sauntered into her meringue-making class, uninvited.
It's now or never.
Ignoring his question, Nancy sucked in a breath, hoping to gird her heart against any potential harm the weighty question she was about to ask might cause.
"Doug. My mother is getting married. In Vegas. In two weeks. And I was rather hoping you'd—"sucking in another breath, she eeked out"—be my date." 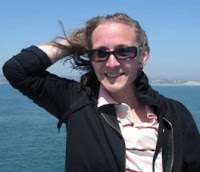 Author of the popular Assignment: Romance series, Barbara was named "Indie Star of 2015" by Publishers Weekly when her first book earned a coveted starred review. A member of Romance Writers of America, she looks forward to the days when her to-do list includes tasks such as “Attend premiere of movie based on my book” or "Accept Godiva's request to be a taste-tester” …much better than “Vacuum hallway” or “Pick up clothes from dry cleaners,” don’t you think?