Book Spotlight on Beauty and the Bayou by Erin Nicholas (REVIEW)

Readers will be charmed by this small town tale of opposites attracting as a gruff man finds himself drawn to a quirky young woman.  Keep reading to get a tempting taste of Beauty and the Bayou by Erin Nicholas, along with my impressions of it, then add this third installment in the Boys of the Bayou series to your bookshelf! 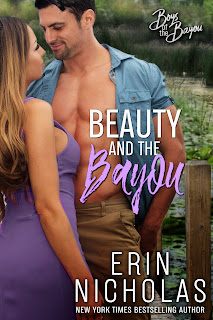 Sawyer Landry knows he's been beastly to be around for the past few months. But he can't seem to remember how to be fun-loving and friendly. Until he sees Juliet Dawson on his boat dock...and realizes that hip waders are, apparently, one of his turn-ons. But despite the beauty in the boots, the last thing he needs right now is a city girl in his way for the next two weeks.
But he's not really getting a vote. Juliet is determined that her little brother rebuild the dock he and his idiot friends smashed. She's quirky, klutzy, independent...and possibly an even bigger pessimist than Sawyer is. He's incredibly drawn to the cynical fish-out-of-water, who seems to be the one person who isn't intimidated by his growling.
The big, gruff boat captain is the first person in a long time to want to watch out for her and Juliet finds that hotter than his grandma's jambalaya. Well, that and his sexy scar, his emotional baggage, and the sense of humor and fun that is buried deep.
But Sawyer doesn't need any more people to worry about long-term and the things that make him feel protective of Juliet aren't going to go away. So, this two-week adventure can't be anything more than a fling. With Juliet down on the bayou, there's an even bigger threat than alligators and hurricanes. There's the very good chance of someone ending up with a broken heart.

“I guess when we need relief from the heat, we go, you know, into the actual shade.” He looked amused. “Among other things.”
“Other things?”
It wasn’t so much that she needed to know other ways to keep cool. But she really liked the way he looked when he was mildly amused. It was a very good look on him.
“Lots of water and sweet tea,” he said.
She gave an involuntary shudder.
His amused smile grew. “No to sweet tea?”
“Not my favorite,” she admitted. “But don’t tell Ellie,” she added quickly.
He chuckled at that. “I would never.”
Yeah, the chuckling was nice, too. “I’ve got the water covered though,” she said.
“Good.”
“Anything else?”
“Well, when we get hot there area couple of other things we do,” he said.
Had he moved closer?
Juliet swallowed. “Like what?”
“We take clothes off,” he said.
Yeah, his voice was definitely deeper now.
“I gue—” She cleared her throat. “I guess that makes sense, but there are bugs and sunburn to consider.”
He gave her a nod. “Sunscreen and bug repellent are important. Cora makes bug repellent that’s amazing.”
Huh. Homemade bug repellent. She might have to give that a try. These people intrigued her, she had to admit. “What about the flying debris?”
Sawyer glanced at the boards behind her. “Yeah, well, I guess we do take some risks down here.”
Ah, ha. “I’d rather be a little hot than dealing with an infection from a piece of wood imbedding itself in my skin and muscle tissue.”
Sawyer paused, then shook his head, almost disbelievingly. “Okay, girl. Then that only leaves one other thing to do when you get too hot.”
“What’s that?”
“Swimming.”
For a moment, looking into Sawyer Landry’s eyes, for the first time since she’d been ten years old, Juliet wanted to take her clothes off and jump into a body of water.
That lasted about twelve seconds. But that was twelve seconds longer than she’d considered doing it to that point.
“I don’t have a swimming suit.”
“You don’t need one. The fewer clothes the cooler you get.”
“Skinny-dipping?” she asked.
“Skinny-dipping,” he confirmed.
“You actually skinny-dip?” she asked.
“Of course.”
Sawyer Landry naked.
She just took a few seconds to relish that thought…and the images that went with it. Skinny-dipping with Sawyer might be the one way she would ever even possibly consider any of that. “Do you have a private pool with lots of chlorine and a maximum depth of three feet?” she asked.
She wondered if being naked but with a life jacket on still counted as skinny-dipping.
“Don’t need a pool when I’ve got a whole bayou in my backyard.”
She shuddered. “There is no way I’m jumping in there. Clothes or not.”
“So, the naked part of skinny-dipping isn’t the problem?” Sawyer asked. “It’s the water?”
“It’s absolutely the water,” she said. It was actually all water, but water where she could see the bottom, touchthe bottom, and that was pumped through a filtration system was tolerable. Maybe. For a short period. With plenty of floatation devices within reach. “I mean, other than just the dirt, there are snakes and alligators and fish…and fish and alligator poopin there.” She frowned. “Do snakes poop? I mean, they probably do, right?”
Sawyer blinked at her. “I’ve never really thought about it.”
She nodded. “They almost have to. And they probably do it in that water, too.” She shuddered again. “No, thank you. There are just places I do not need dirty bayou water.”
“It’s the poop that’s keeping you from skinny-dippin’?” Sawyer asked, clearly trying not to laugh. “You are really thinking about the wrong thing when it comes to bein’ wet and naked, darlin’.” 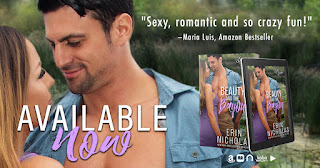 I love the world Ms. Nicolas has crafted here in the bayou with its sensuality, its colorful denizens with their endearing behaviors, and the unforgettable heroes and heroines taking up residence and undertaking romances that were fun and flirty.  This series has been a carefree one with stories short on angst but long on romance and each one has been great escapism.  This latest installment has a bit more angst though as opposites attract with a woman who’s always taken care of others being drawn to a man bruised by life who’s equally drawn to her but who’s trying to work through his grief.

Juliet Dawson is a colorful heroine, quirky and full of life.  She’s exuberant and her character practically jumped off the pages.  She’s a caretaker too, the kind of heroine who makes sure everyone else is happy at all times.  She’s also a planner, someone who thinks of every outcome ahead of time and prepares for it.  When it comes to Sawyer though she’s very unprepared, unprepared for the grim and gruff exterior he’s been showing to the world since the death of someone close to him.  He’s not alone as Juliet’s got her own ghosts amidst a past that has made her the quirky woman she is today.  Her fears over “what if” and their mutual pain is the foundation for a brighter future in this surprisingly heartfelt romance that captivated me from the very beginning.

Sawyer Landry’s been having a rough time of it since the death of his friend during one of their company’s bayou tours.  He’s become obsessed with safety and focuses more on what could go wrong instead of looking on the bright side of life.  Juliet’s sudden appearance angers him but he’s immediately drawn to her and can’t help wanting to protect her...whether from himself or from something else in a sizzling connection that kept me glued to the pages.  Sawyer’s a likable hero with a facial scar that’s a daily reminder to what happened to his friend.  Before the accident Sawyer was quick to smile, full of the usual Landry charm, and my heart ached for him and his struggle to move on since his loss.  Juliet was just what he needed though and together they’re a formidable couple on a journey full of acceptance of each other’s quirks that had me rooting for them every step of the way.

From the first page to the last this was another satisfying romance from Ms. Nicholas that put a perpetual smile on my face.  Courtesy of its appealing main couple, with their witty banter and sensual encounters, I was fully invested in their HEA and cheering them on wholeheartedly.  They were a crackling couple who I could easily relate to and they made me love their families all the more too.  It’s family that’s the bedrock of this series and I enjoyed the glimpses we got of the rest of the Landry clan as well as Juliet’s brother Chase.  These glimpses were endearing and have me excited for the future as I noticed a bit of attraction between two other characters.  The familial vibe throughout this book warmed my heart while the romance has me counting down the days until the next installment in this series hits bookshelves.  On a whole this book is the perfect summer read with its fun and flirty interactions and it’s romance full of heart and soul is one that I definitely recommend. 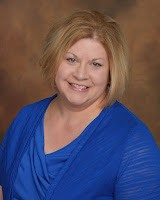