Two people hoping to regain their place in society form an unlikely bond, and start a fake relationship, in order to get revenge on those who look down on them in this sensual read that will pull readers into the world of art.  Keep reading to get a tempting taste of The Art of the Scandal by Suzanne Tierney, then add it to your bookshelf.  In honor of this standalone historical romance make sure to fill out the form below for the chance to win a $25 Amazon GC too! 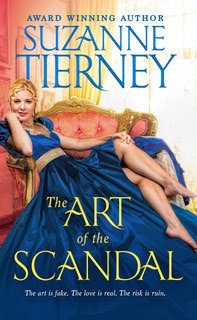 The Art is fake. The Love is real. The Risk is ruin.
May, 1850, London, England
"Beware, darling. Disaster rolls in on a whisper.”
Jilted by her fiancé, abandoned by her father, and scorned by her friends, Lady Lydia Pierpont and her pregnant, 15 year-old sister will be homeless by midnight unless she can charm the deed of her family’s home out of the mysterious South African who won the estate in a poker game.
Grieving over the death of his Jewish father and English mother, Simon Cohen has no time for gallantry. He’s out to reclaim his mother’s name from the aristocracy who humiliated her. With an art collection worth millions and the National Gallery begging for a donation, revenge is within reach.
But when Lydia points out that Simon’s treasure trove includes at least one forgery, they strike a deal. She’ll ferret out the fakes and if the debut of his collection goes smoothly, she’ll win back her home. If she fails, she will take the blame and go to jail.
Together, Lydia and Simon will feign an engagement, delve into the world of art forgery, and navigate the narrow-minded prejudices of London society to discover that love is forged, never faked.

The rain soaking through her dress bit at her spine. Hunger made her reckless. The stupid painting mocked her. She came to her feet, raised an angry finger at the assembly of philosophers who squandered their time on metaphysical questions. The simple answer was food, a safe bed, and friendship. All of which she’d lost in the span of twelve hours.
“I may not be a breaker of rules.” She inched toward Mr. Cohen. “I may not see into the dark heart of man.” Another step. “But I am not blind.” She held her chin up, knocked her hat back. No point in hiding her wounds. “I know how to spot a fake. And your Knowledge is Everything, sir, is a fake.” 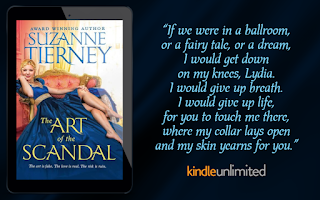 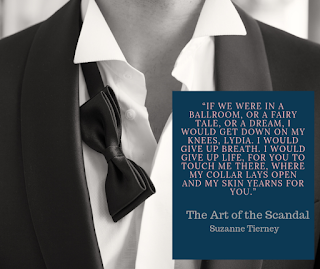 SUZANNE TIERNEY - WHETHER it's restlessness, wanderlust, or train fever, I love stories about journeys. So that's what I write--books steeped in the lush details of history that tell of heroines thoroughly devoted to their sense of place, even when it's the wrong place, and the heroes who catapult, challenge and cherish those heroines, even when they have no intention of setting down roots.
FROM your arm chair, your train carriage, your vivid imagination, come and join me on the ultimate adventure.