A woman leaves her abusive past behind in this historical romance that warmed my heart from the first page to the last.  Keep reading to get a tempting taste of Maisie by Emberly Hart, then add this western romance to your bookshelf.  In honor of this fourth installment in The Bridal Train series make sure to fill out the form below for the chance to win a $20 Amazon GC too! 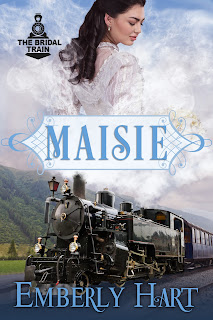 Maisie thinks of herself as a tough, resourceful woman, and that’s about to be put to the test. After leaving her abusive husband and making off with all the cash she can carry, her only goal is to stay out of sight and survive. Then she learns her husband is six feet under. She should be able to relax, only she fears she will be blamed for his murder. So she hops a train and finds herself as a Bridal Train Bride.
Henry Cartwright loves tending the land, growing crops and raising animals for market, though it’s a lonely life. When his family urges him to take a wife, he can’t think of anything he has to offer a female besides hard work, but he settles on a Bridal Train Bride. Maisie is soft-spoken and reserved, leaving Henry thinking of her as a frightened animal, and he longs to set her at ease.
With newfound freedom and peace in her heart at long last, Maisie begins to wonder if she was wrong about all men being the same. Maybe this one deserves a chance—and a bit of the kindness he doles out to her so easily. When problems arise on the farm, they’re forced to work together and fight for the life they share. It just might be time for Maisie to dig up that satchel full of money she buried out back.

He caught her staring—again. From the shade of his hat, his blue eyes settled over hers. “Would you like to help me refresh the horses, Maisie?”
His deep voice was gentle, but that could just be for his horses’ sakes, keeping them from bolting across the prairie without a driver in the seat. Now that her imagination had taken that turn, she could not fathom what she would do if such a thing happened. She had no clue how to drive a pair of horses, let alone hooked to the cart.
After a second of consideration, she gave a nod. When she started to climb to the ground, Henry was there with his big palm open to help her down.
This time, her stomach did not hurt as much about touching a strange man, and she only paused a heartbeat before allowing him to assist her down. Once her boots touched the ground, she pulled away and looked around.
“What do you think of the Kansas countryside?” he asked as he moved to the horses.
“It’s odd how I have been staring at it for over an hour but from here, standing here on the plains, makes me see it in a different light.”
The corner of his mouth quirked up, and he ducked his head as he tended the animals. “I know the feeling. Like when you walk a road you truly know it. All the dips and rises, the rocks you wouldn’t see while riding along.”
She nodded, surprised at how easily he put her thoughts into words, when she could not begin to do that for herself.
Easing forward, she watched him check leather straps and forelegs before straightening. He pierced her in his solid stare. The blue of his eyes did not have a sinister light, but were a deep, clear blue like the sky above.
“Can you reach into the back of the cart?” he asked.
She nodded. “What am I searching for?”
“A grain sack. I like to encourage my horses when they tire, give them a taste of the treat they’ll get once they’re at home and tucked up in the barn.”
She felt a pull of her lips and was shocked it was a reaction to the picture he painted with his words… and it was almost a smile.
When had she last smiled? Years.
Moving to the back of the cart, she stood on tiptoe to reach over the side. When she located the sack he spoke of, she withdrew it and carried it back to Henry. As she neared, she found his words about the road were true. She had traveled all this time with the man and had never noticed the way he smelled before now...
Like grass and the grains he dumped onto a broad palm for the horses to nose. Henry also had a bit of a leathery man smell that was not unpleasant.
As one horse nudged most of the grains off his hand, Maisie gave a small giggle.
His head snapped up, and she could not be more stunned that the sound had come from herself. If she had no cause to smile, she certainly had not heard herself laugh in… well, too long.
To cover the sound and dispel her nervousness, she began to chatter. “That horse is a bit of a pig. He is in such a hurry to eat that he pushed it all off your hand. One time, I saw a dog like that. After he discovered the dish was empty, he pushed the bits all around the room, into the corner even.”
Henry stared at her with a pleasant, open expression on his face.
A nice-looking face, she saw now. If they had children, they would not be terribly unfortunate in the looks department.
The notion in her mind slapped a hot flush across her cheeks. She felt her face scorch and a sweat bead on her nape. Why had children come to mind? That only led to how one created children.

BUY THE PREVIOUS INSTALLMENTS IN THE BRIDAL TRAIN SERIES here.

Emberly Hart has been in love with characters from the rough and tumble West since the moment she picked up her first romance novel. Her historical heroines are smart and sassy in a time when women were expected to use their sewing skills rather than their wits, and her dashing heroes are the stuff romances are made of. Emberly will bring you sweeter, tamer tales from times past along with the gripping characters you will fall for.