The past comes back to haunt two people whose lives, and hearts, become intertwined in this dark romance that will keep readers on the edge of their seats.  Keep reading to get a tempting taste of this special excerpt of God of Summer by Kat Chant, then learn even more about this book by visiting the other sites hosting this tour.  In honor of this contemporary paranormal read make sure to fill out the form below for the chance to win a $25 bookstore GC too! 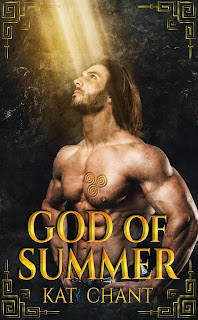 Back in the Bronze Age, Angus McCraggan sacrificed his life to break the Celtic curse laid on his kind. He failed. Millennia later, he returns to modern Ireland to find his people have become feral, vengeful shadows. With his hollow hill now packed with tourists, he uses his power to keep his past hidden.
Until an American calls him out.Since a banshee attacked her as a teen, Erin De Santos has been tormented by dreams of a boy she’s never met. Armed with a new identity, she returns to the Emerald Isle determined to face her nightmare. But her discovery turns fatal.When the banshee strikes again, Angus surrenders his heart—and his hope of freeing his people—to save her. With his life now hers and his curse descending, Erin must make a terrible choice: kill her savior or share his doom.
EXCERPT:
“Angus...” She stalled at the rise and dip of his Adam’s apple as he swallowed hard at her use of his first name. Addictive holding that sort of power over a person. Addictive and terrifying. She wet her lips to buy her time and his eyes tracked her tongue, his pupils becoming black pools rimmed by the faintest line of blue.
“Angus, I’m better at running than staying. I won’t be good at this.” She grimaced, wishing she knew how to ask for his understanding. “No one’s ever needed me before.”
“Come here to me, Erin.”
An order not a request. Leaning forward to close the space between them, she ran her hands from his shoulders to the tight, straining cords of his neck. His skin was smooth and cool, twitching under her touch. He lifted his head to stare at her through heavy lids, the movement making his thick, black hair drift across her knuckles. Then he put his hands to her waist and pulled her down into his embrace, until they kneeled knee-to-knee. He traced around her forehead with his fingertips to slide a line of her hair behind her ear, his touch sending hot darts along her nerves. His beard stubble scratched her cheek as he put his lips to her ear.
“Let me give you a reason to return to me, Erin, mo chroí. Éirinn go brách.” Erin, my heart. Erin, forever.
Her eyes rolled back as his voice smoked through her. He kissed her neck and her pulse rocketed straight into the stratosphere while any muscle tone she might’ve had rendered into gloop. In case she somehow misinterpreted his offer, his hands scoped around her hips to rest possessively on her buttocks.
Her skin burned beneath his touch.
BUY here.
REQUEST REVIEW COPIES here OR here. 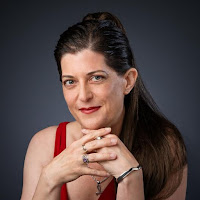 AUTHOR INFO:
Kat Chant is an award-winning writer. A bookworm who grew into a history buff, she swapped beaches for castles and moved from Australia to the UK. When studying medieval history, she fell in love with a lad from Ireland...and fell in love with his country, too.
She and her family live in the heart of Ireland, surrounded by fields in forty shades of green.
Kat is a keen cook and often experiments with traditional farmhouse foods such as making bread, cheese, jam and liqueurs. She also decorates the occasional cake.
WEBSITE  |  FACEBOOK  |  INSTAGRAM  |  PINTEREST  |  TWITTER  |  TIKTOK  |  BOOKBUB AUTHOR PAGE  |  BOOKBUB BOOK PAGE  |  GOODREADS AUTHOR PAGE  |  AMAZON AUTHOR PAGE
**********GIVEAWAY**********
a Rafflecopter giveaway
at September 27, 2022