Two people who think they know what they want in a spouse find their hearts tested in this sensual Regency romance that reintroduces readers to a beloved family with characters we're rooting for.  Keep reading to get a tempting taste of The Marriage List by Ella Quinn, along with hearing from the author as to why readers are drawn to historical romances, then learn even more about this book by visiting the other sites hosting this tour.  In honor of this eighth installment in The Worthington Brides series make sure to fill out the form below for the chance to win a $20 bookstore GC too!
Hello everyone.
Thank you for having me on your blog! Why are readers drawn to historical romances?
I’ve asked this question during release parties and the answers I get are varied. Some readers want to escape modern life. They think that the men were more polite and heroic. Some love the clothing, especially from the Regency era. Others like the overall simplicity of an earlier time. And then there are the balls and other entertainments. But when asked if they’d like to actually live during that time, most of them say they wouldn’t. They just like being able to be there for a while. 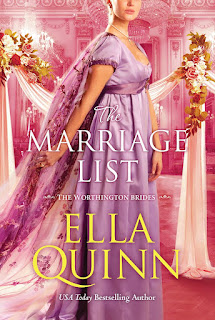 By popular demand, USA Today bestselling author Ella Quinn returns to Regency England’s beloved extended family, The Worthingtons, for the first in a sparkling new spin-off series! Determined to tame the marriage market on their own terms and make advantageous love matches, three confident sisters draw up a list of qualities they expect their new beaus to meet. But as they are about to discover, people are hardly ever perfect and the road to love is far more thrilling and interesting than they could ever have imagined...
As part of a large, rambunctious family, Lady Eleanor Carpenter has gained some knowledge of what makes a successful marriage. She’s even compiled a list of essential qualifications in a potential husband. John, the Marquis of Montagu, seems of good character (check), with money enough to support a family (check). But what of the many other requirements on her list?Montagu, meanwhile, believes the key to a comfortable life lies in marrying someone quiet and docile. Yet the one lady who captivates him could hardly be more different to what he envisioned. Lady Eleanor is as opinionated as she is lovely, determined to improve working conditions for coal miners, even at risk to her own safety.From evenings at Almack’s to carriage rides in Hyde Park, this Season will contain many pleasures—and a few surprises that compel both John and Eleanor to rethink their expectations. For one thing is certain: love will not be defined by any list...
EXCERPT:
“Good morning,” he called, hoping Lady Eleanor would be happy to see him. “Good morning,” the three ladies said at the same time.
They were in the same order as they had been before, allowing him to ride to Lady Eleanor’s side. “As you see, I am able to rise earlier.”
She smiled politely. “When you are not working too late.”
He thought she was teasing him, but the expression on her face told him nothing. “Yes.” He glanced up at the sky, as if he’d not noticed it before. “It promises to be a lovely day.”
“It does.” They walked the horses through the gate. “The later spring flowers and shrubs are beginning to make an appearance.”
John hadn’t particularly noticed. He should have if he was going to talk about flowers and the weather. “Are they?”
“Yes.” She nodded. “The lilac in our garden is starting to bloom. It is almost the end of April.” “Eleanor,” Lady Madeline said. “I am for a good run. What about you?”
Lady Eleanor glanced at him. “We come early so that we can gallop. You may join us if you wish.”
As she spoke, the mares were already increasing their speed. He had not even answered when the horses began to canter. Damn, she had an excellent seat. He urged Aramus faster. “Come on, boy. You don’t want to be beaten by a mare.”
“Blast it, they’re fast,” St. Albans said.
John’s gelding broke into a gallop. He’d almost caught up to them when the ladies reined in next to a giant chestnut tree, all of them smiling broadly. He wanted to be the one to make Lady Eleanor smile that way. He thought about telling her she rode well, but that might sound even more stupid than he wanted her to think he was. She had to know she was an excellent rider. “That was exhilarating.”
St. Albans had gone to Lady Alice and said something that made her laugh. John needed to think of something witty to say. Once again, he wished he’d spent time on the Town. But he hadn’t wanted to leave his father as Papa’s health declined. “Are you up to another gallop?”
“Yes.” Finally she gave him a real smile. “I’d like that. To the willow.” She took off again, fluidly moving as one with her horse.
“Drat the woman,” he muttered to himself as he rushed to catch up with her again. This was going to be a lot more work than he thought it would be.
BUY AT AMAZON here.

AUTHOR INFO:
USA Today bestselling author Ella Quinn's studies and other jobs have always been on the serious side (political science professor and lawyer). Reading historical romances, especially Regencies, were her escape. Eventually her love of historical novels led her to start writing them.
She is married to her wonderful husband of over forty years. They have a son and two beautiful granddaughters, a Great Dane named Lilibet, and a cat named Winnie. After living in the South Pacific, Central America, North Africa, England and Europe, she and her husband decided to make their dreams come true and lived on a sailboat for three years. After cruising the Caribbean and North America, she completed a transatlantic crossing from St. Martin to Southern Europe. She's currently living in Germany, happily writing while her husband is back at work, recovering from retirement. She expects to be back on the boat in 2022.
Ella loves when readers connect with her.
WEBSITE  |  FACEBOOK  |  TWITTER  |  GOODREADS AUTHOR PAGE  |  BOOKBUB  |  AMAZON AUTHOR PAGE
**********GIVEAWAY**********
a Rafflecopter giveaway
at December 06, 2022