Book Tour for Engaged to the Earl by Lisa Berne (GIVEAWAY)

A young woman slowly comes to realize that her fiancée isn’t as perfect as she thought when a man from her past returns to make her heart race in this exhilarating Regency romance.  Keep reading to get a tempting taste of Engaged to the Earl by Lisa Berne, then add this historical tale to your bookshelf.  In honor of this fourth installment in The Penhallow Dynasty series make sure to fill out the form below for the chance to win a print copy of this book too! 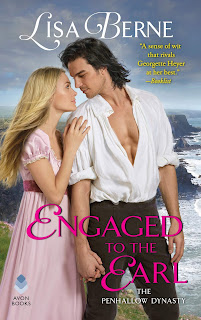 A spirited debutante—a brash adventurer—the perfect fiancé—and good intentions gone terribly, deliciously bad. The Penhallow Dynasty continues in this sparkling Regency romp!
Christopher Beck came striding into a glamorous London drawing-room and can’t believe his eyes. The last time he’d seen Gwendolyn Penhallow, she was a dreamy, strong-willed girl with a wild imagination, and now she’s a beautiful and beguiling young lady...who’s engaged to Society’s darling, the Earl of Westenbury. Christopher had fled England to seek adventure elsewhere. Has he found it here, too—the most delightful adventure of his life?
Gwendolyn is sure she’s betrothed to the most wonderful man in the world. But then, shockingly, Christopher Beck shows up. Nobody has heard from him in years—and not only he is very much alive, he’s also sinfully attractive, blithely unconventional, and disturbingly fun to be with. Which wouldn’t be a problem, except for the fact that she’s, well, promised to another. And just what on earth is she going to do about it?

She was breathtakingly lovely, golden-haired, blue- eyed, slim, dressed all in white and moving with what struck him as unselfconscious grace. She was smiling at him with such evident friendliness that he couldn’t help but smile back.
And then it hit him.
Of course.
It was Gwendolyn Penhallow.
Christopher took another swallow of his champagne and put the glass onto the tray of a passing servant.
The last time he’d seen Gwendolyn, it was back in Whitehaven and he had been little more than a rude, restless, hostile boy— angry and lost. He had left England the very next day and, every once in a while, when his spirits had sunk very low, he’d thought back to that moment, years ago, when she had taken his hand in hers, and with such kind sweetness that he had been rather paralyzed. And here she was, graceful, radiant, coming close, hold-ing out her gloved hands to him, saying warmly: “Christopher! You’re alive!” 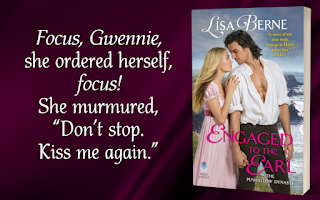 LISA BERNE read her first Georgette Heyer novel at fourteen — it was the effervescent Lady of Quality — and was instantly captivated. Later, she was a graduate student, a grant writer, and a teacher — and now writes historical romance for Avon Books, with her stories set mostly in Regency-era Britain. She lives with her family in the Pacific Northwest.