Just in time for the holidays comes this heartwarming tale that pulls readers back into the world of the Alaska Blizzard hockey team as a new baby upends the lives of one of our favorite couples as they juggle the careers they love with the love they have for their family.  Keep reading to get a tempting taste of A Very Blizzard Christmas by Kat Mizera, then add it to your bookshelf while it's on sale for 99 cents after getting my impressions of this festive and family-fueled novella! 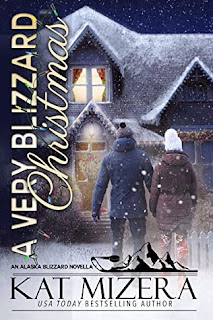 She has a new baby with the love of her life and Christmas is almost here.
It should be the best time of her life....right?
But when Danielle Petrov welcomes her new bundle of joy just in time for the holidays, everything isn’t as magical as it should have been. She’s trying to plan a surprise for their first Christmas as a family of four while dealing with a touch of postpartum depression and a six-year-old who wants nothing to do with his new sibling.
Sergei is completely smitten with his wife, his son, and the new baby, but he knows something is bothering Dani. Between being on the road with the Blizzard and trying to spend time with the kids, he’s not there for her the way he wants to be.
As the holiday barrels down on them, nothing is going according to plan. Sergei is determined to salvage what he can of a complicated holiday season. Will an unexpected storm be what brings everyone together?
BUY LINKS:  AMAZON  |  UNIVERSAL  |  iBOOKS  |  BN  |  KOBO
MY IMPRESSIONS OF THIS BOOK:
With each new release in the Alaska Blizzard series I've felt myself becoming a part of their family, a family made up of hockey players from around the world finding their HEAs.  They're a family who have shown themselves supporting each other through each high and low and it's endeared them to me, had me counting down the days towards each new release.  This latest release takes place during Christmas, bringing back the beloved couple of Sergei and Dani Petrov as they juggle a new baby with their young son and busy careers.  It's a tale steeped in realism that pulled at my heartstrings while giving me a large dose of festive and feel good celebration.
Dani Petrov is about ready to give birth when this book starts, ready to experience all the changes that will come with that...the fear of their young son feeling neglected, concerned that the sexual sparks between her and Sergei might fade, as well as balancing her career with motherhood successfully.  Dani was clearly trying to have it all, trying to make everything picture perfect, which led to a few moments of tears and anger.  But luckily for her she's got a delicious and supportive husband who actually talks through things with her and goes out of his way to make her smile through both big deeds as well as small.  She also has the unwavering support of the other women in the Alaska Blizzard world who help her in caring for her new baby while helping her cope with little Nico's rebellion.  Sergei's teammates also step-up throughout this story to give him encouragement and support as he contemplates retirement while still loving playing hockey.  Their comments were realistic with a bit of humor as they put their hearts out there for all to see.
From the first page to the last this was a sweet and heartwarming read that depicted a nice balance between the reality of becoming parents with the ups and downs of daily living when a new baby arrives on the scene.  Dani's emotions were a bit rattled early on but things never went too dark for her because of the large support system she has around her due to her near-perfect husband, a large group of girlfriends there at a moment's notice, and a team owner willing to spend any amount of money to make the people in their world happy.  I adored Nico as Dani and Sergei were getting together, but he was clearly unhappy here and it made my heart ache as his feelings were completely understandable with all the changes.  He ultimately showed me why I've adored him from the start and it has me greatly anticipating him reaching adulthood.  Though this is a novella I never felt that the story was lacking in any way.  There were loving interactions between a married couple as well as a scorching scene that had me fanning myself for a second or two.  There was the chaos and warmth of the holiday on display too that was a nice backdrop to all the secondary characters we were reintroduced to and who were a strong support in helping Dani and Sergei reach their HEA again. Though the ending felt a bit rushed I still found myself satisfied by this delightful holiday morsel that has me counting down the days until we revisit the Alaska Blizzard hockey team.
My rating for this is a B+
*I got this book from the author for review in exchange for my honest opinion. 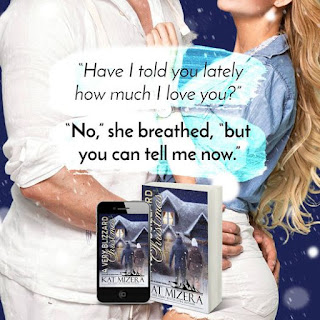 AUTHOR INFO:
USA Today Bestselling and award-winning author Kat Mizera is a South Florida native. Born in Miami Beach with a healthy dose of wanderlust, she's called Los Angeles, Long Island, upstate New York, Massachusetts, New Hampshire and Atlanta home. She's never been able to pick which locale is her favorite, but if pressed, she'd probably choose the west coast.
A typical PTA mom with a wonderful and supportive husband (Kevin) and two amazing boys (Nick and Max), Kat can usually be found scrapbooking or indulging in her second love (after writing) - traveling. Greece is one of her favorite places in the world. She loves that Athens is a big city with a small-town feel. The food, beaches and culture keep her going back as often as possible.
Kat's been a working freelance writer for nearly 30 years. She sold her first article--a review of a rock concert--for $10 in 1985. Since then she's been an entertainment journalist, waitress, bartender, legal assistant, food critic, magazine editor, substitute teacher, and sports writer. She also spent some time working at A & M Records in Los Angeles.
As you can guess from her Las Vegas Sidewinders series, Kat loves hockey and occasionally writes articles about her favorite team, the Florida Panthers. The rest of the time, she writes novels: sexy, romantic fiction that she hopes makes you as happy as it makes her. There's something enticing about hockey players and romance...
FACEBOOK  |  AMAZON AUTHOR PAGE  |  TWITTER  |  BOOKBUB  |  WEBSITE
at November 27, 2020