Book Review for Straightened Out by Janine Infante Bosco...... 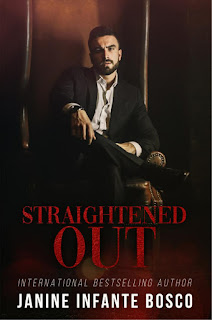 I'm a mob boss with a tarnished name, leading a kingdom in the shadows of disgrace.
She's a ballerina, the sister of my underboss, dancing her way through life.
Until her, all I wanted was to be straightened out.
But with power comes sacrifice.
With respect comes fear.
With love comes death.
The rule of the streets is to take or be taken.
Some legends are born, others are made.
But not all survive.
********************
It's a tale of second chances and unconditional love found amongst the pages of this gritty and sentimental read set in the mafia world and it's been a story that I've been waiting for with bated breath.  With its unforgettable hero Rocco, to his attraction to his right-hand man's little sister Violet, theirs is a romance bordering on forbidden while warming my heart through a youth spent as friends to their sizzling connection as adults.
Rocco Spinelli has intrigued me since his introduction in the Satan's Knights MC series of books.  He had other plans for his life but was called up to take his place in the Family business and has flexed his muscles mightily throughout his time as boss.  With the stain to his family name he feels like he has to prove his worth even more which has led to a rather self-involved personality, someone who's a bit jaded with his life, but there was still something about him that drew me to him.  In this book readers see the chinks to his carefully crafted armor come through as his reunion with a youthful friend turns very adult as she's no longer the bothersome sister to his best friend that he remembers her being.  That's not to say that Rocco's not a badass in this story...because he is.  He's not afraid to shed blood and he definitely doesn't hold back when those he cares about are put in danger, which happens quite often throughout the story as there's big changes afoot in the mafia world.  From start to finish he's grown more confident in his role as boss while becoming more conflicted when it comes to matters of the heart.  His inner dialogues particularly pulled at my heartstrings and showed a tender heart lurking behind his tough facade.  I enjoyed watching him at work while equally loving the give and take between him and Violet in a romance that made him stronger ultimately.
Violet Cabrera has been in love with Rocco since she was a young girl, following him and her brother around like a lovesick puppy.  She was drawn to him from the start, understands him like no one else, and it's this longtime connection that gives him strength during the difficult changes occurring throughout this story.  The only thing she wants more than Rocco is to be a prima ballerina.  She's studied to be one her whole life, her brother sacrificing for it too, and I was rooting for her every step of the way to bust the stereotypes surrounding her career choice.  Through it all Violet was an immensely likable heroine, sassy and tough talking.  I loved the verbal foreplay between her and Rocco early on and  the transition to something more mature felt natural.  Violet was a strong-willed young woman, more than aware of what Rocco does as boss, but willing to stand by him as she knows what's in his heart and loves him wholeheartedly.
Rocco and Violet were a formidable couple and I was rooting for them to overcome all the danger and angst thrown their way.  I enjoyed their witty, playful, and sensual banter which made for a crackling romance in a story full of gritty choices, danger, and suspense.  I loved getting deeper insight into Rocco, the reluctant and ill-prepared boss, and was further thrilled by the reappearance of past characters from the world of the Satan's Knights.  These characters have become like family throughout these books and I'm constantly on edge while rooting them on to get exactly what they want.  On a whole the romance was satisfying while pulling at my heartstrings but the action is what kept me riveted to the pages, waiting in breathless anticipation of what will happen next!
My rating for this is an A-
*I got this book from the author for review in exchange for my honest opinion.
at November 30, 2020