Book Tour for Kisser of Death by MHB (REVIEW)…… 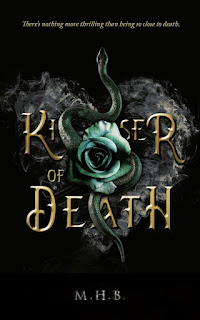 One accident.
Two men.Almost three years of despair. Four beating hearts growing in pain. Five lives forever changed.Everything fell apart in the blink of an eye.These days my own misery keeps me company.I never thought this would be me—a twenty-four-year-old—stuck in a dead-end relationship.Gone are the thrilling adventures with Harvey Stark.Gone is his smile.Gone is the sight of his dimples and the sparkle in his bright blue eyes.He’s changed into a hollow version of himself and I’m just a shadow following him around our home.Then I meet my new boss at a firm in Downtown Chicago. Damon Dreygon challenges me in ways I never knew existed and makes me believe in myself again. Our souls match instantly, and meeting Damon feels like a step toward peace.Except it’s not. Because everyone grieves differently.While one man refuses to touch me, the other won’t love me. And I’m crawling through the crippling chaos, barely holding on... 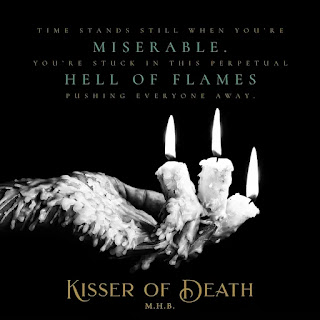 MY IMPRESSIONS OF THIS BOOK:
As a person who reads lots of romance novels I must say that this release managed to do something different, it managed to set itself apart from other books through its unconventional storyline and the heavy emotions being dealt with.  After a tragic accident, life changes irrevocably for two people who seem to have lost their way…as a couple and as individuals.  When a new man enters the picture things take an even more unexpected turn in a story that will take readers on a journey of emotional twists, turns, and secrets just waiting to be revealed.
When the story starts Gemma and Harvey are a happy couple living life to the fullest, side by side they’re perfectly in sync.  After the accident though, one which leaves Harvey in a wheelchair, everything changes between them.  Harvey’s no longer the loving man full of life who once stood by Gemma unconditionally, he’s now an angry and bitter man who constantly denies her love.  As a disabled person myself I could understand his feelings, his anger over the changes to his life.  But he’s definitely a difficult character to warm up to because of it, a difficult man for Gemma to still care about at times since he does nothing but push her away.  Gemma still loves Harvey, but she misses what they once had between them.  She misses being told how much she’s loved and longs to be loved once again.  At the same time she’s riddled with guilt, hating herself for wanting what they once had again or giving up and finding those feelings elsewhere in a journey that left her full of emotional conflicts and indecision throughout the second half of the book.  While Harvey and Gemma are waging war within themselves, she comes into contact with the sexy and mysterious Damon.  Readers don’t learn much about Damon in this book, other than he’s an endless temptation for Gemma.  As her new boss, Damon reintroduces her to living life to the fullest, shows her the excitement that she’s been missing since the accident.  But he refuses to give her anything more as he appears to be a man incapable of giving love.  The connection between these two is sizzling, but is Gemma really willing to take a chance on a man who claims he won’t ever love her or will she try to reclaim the love she once shared with Harvey?
From the first page to the last this is a book full of angst, a slow burn romance buried in a love triangle riddled with emotional twists and turns and secrets.  It’s a heavy read, a read that pulls at the heartstrings with no easy answers.  The characters aren’t always likable but they are compelling and watching them navigate their rocky existence kept me glued to the pages.  Overall this is a angsty romance with a lot of story left to tell, and with the promise of more to come, I’m looking forward to where life takes these three people next.
My rating for this is a B+
*I got this book from the author for review in exchange for my honest opinion. 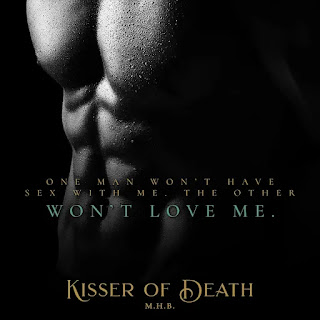 AUTHOR INFO:
M . H . B . graduated law from a Canadian University. She loves spending time with her partner and her German Shepherd Dog. She has a passion for animals and enjoys the simple things in life: books, music, chocolate, sunny days, and overall wellness. When she is not writing, her mind is in another world, with a book in hand.
WEBSITE  |  GOODREADS AUTHOR PAGE  |  FACEBOOK  |  INSTAGRAM
at October 22, 2021