A woman agrees to a fake relationship to clean up the PR image of a hockey player, but ends up finding an attraction to the man who hired her in this sports-fueled romance based on lies.  Keep reading to get a tempting taste of Jock Wanted by Kate Meader, along with my impressions of it, then add this sixth installment in the Rookie Rebels series to your bookshelf! 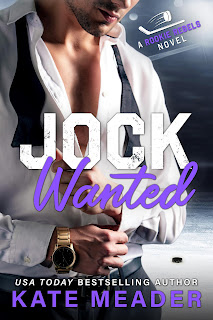 She has her heart set on a hockey player. Any hockey player.
When the new general manager of the Chicago Rebels tasks Tara Becker with faking it with one of his players to help clean up the naughty jock's act, she's all over it. She'll make that misbehaving hunk of muscle look good and get her dream guy into the bargain.Only the path from fake to real is riddled with thorns...New Rebels GM Hale Fitzpatrick thinks ditzy blonde and wannabe WAG Tara is the perfect solution to his PR problem - until she isn't. Soon Fitz realizes that maybe he doesn't have control of the strings after all...especially when he starts to fall for his pretty little puppet.A fake relationship hockey romance - with a twist! 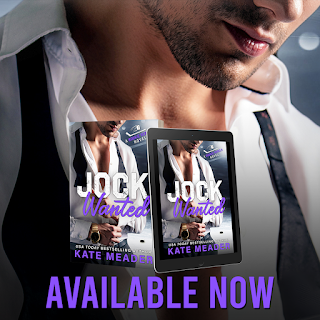 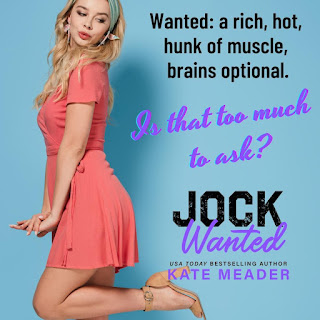 MY IMPRESSIONS OF THIS BOOK:
As a fan of sports-fueled romances I found myself drawn to this story from the very start.  While the sports aspects of this tale get put on the back burner, readers still get glimpses of excitement on and off the ice.  In a story of a  fake relationship that slowly becomes all too real, readers will find surprising depth too as the main couple gets to know each other while showing their true selves.
It's a quick read with a main couple who aren't who they first appear.  With each turn of the page readers get to see the true characters behind the facade they show the world, and I found myself becoming more and more invested in their lives.  Through this series Tara has shown herself to be a bit ditzy, very superficial, and determined to marry for looks and money.  She's a woman who's popular and is friends with many.  Even though it's revealed why she's determined to live a life of superficiality, I still had moments of not liking her, though I understood her.  She's always been told she's nothing more than a pretty face, but in scenes with Hale she shows a smart and caring person.  There's surprising depth to this heroine, beyond her looks and playful demeanor, and I enjoyed the heroine that emerged in Hale's presence.
Hale too early on showed the world a facade.  He was a bit arrogant, a bit conceited, and grumpy at times.  As the story progressed though readers discovered an older hero, a wiser one, who ends up being totally drool-worthy and the perfect book boyfriend.  He ends up charming Tara by interacting with who she is behind the curtain, endearing himself to readers in a slow-burn connection full of sexual tension.
On a whole this was an entertaining read, a romance that took familiar tropes and turned them around.  The main couple were a sizzling pair with scenes that crackled while warming my heart.  It was a satisfying addition to the series and a delightful summer read that I recommend!
My rating for this is B+
*I got this book from the author for review in exchange for my honest opinion. 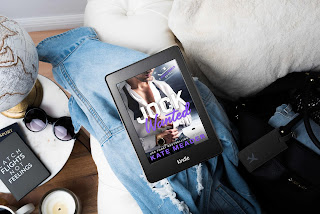 AUTHOR INFO:
Originally from Ireland, USA Today bestselling author Kate Meader cut her romance reader teeth on Maeve Binchy and Jilly Cooper novels, with some Harlequins thrown in for variety. Give her tales about brooding mill owners, oversexed equestrians, and men who can rock an apron, fire hose, or hockey stick, and she’s there. Now based in Chicago, she writes sexy contemporary romance with big-hearted guys and strong heroines - and heroes - who can match their men quip for quip.
NEWSLETTER  |  WEBSITE  |  FACEBOOK  |  INSTAGRAM  |  TWITTER  |  GOODREADS AUTHOR PAGE  |  AMAZON AUTHOR PAGE  |  BOOKBUB  |  FACEBOOK READER GROUP
at June 14, 2022