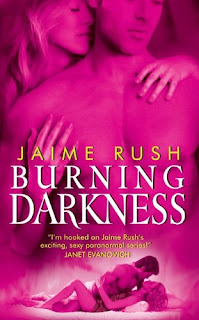 Fonda Raine has hated Eric Aruda ever since she learned of his and his friend's existence while working for a secret government agency.  Her job was to track down Eric and his friends, who all have varying types of psychic abilities, and eliminate them.  Her hatred grew the minute Eric killed the man she loved, and now that the agency she worked for has been destroyed, she's going after him on her own.  But the minute she has him in her grasp is the moment an assassin shows up to kill them both.  From then on they must work together to stay alive and uncover and stop an even bigger danger.  A danger that affects not only those with psychic abilities, but all of society.

Eric Aruda's been dreaming about a wild and sexy pixie when she's suddenly in front of him with a knife.  She's not the only one who wants him dead and from that moment on he has a somewhat unwilling partner helping him stop the man chasing them and stopping an even more heinous plan.  Along the way though they learn more about one another and break through each other's emotional barriers to start falling in love.  But just when their love starts, their lives will be on the line to stop an evil bent on mass murder.

This is the fourth book in the Offspring series and features many characters from the previous books.  Eric plays a huge role in this book, with the other Offspring playing a very peripheral role.  The only time he interacts with his friends is via the phone which feels jarring to the flow of the action.  Eric doesn't need much help though as he's the perfect hero, strong and sexy and willing to die for the woman he loves.  Fonda makes a good partner to Eric, she's strong and feisty and looks before she leaps.  She carries a lot of emotional baggage, but it's very believable emotions she's feeling.  Seeing the two of them bond is the best part of the story.

The weakest part of the story is the storyline itself.  There's a lot of action, but the action doesn't usually lead to anything.  There's scene after scene of Eric and Fonda running, but it feels like they're running in circles.  The evil plan that the bad guys implement comes about quickly and ends just as quickly with action scenes that are exciting, but don't last very long.  But while I was ultimately disappointed with the overall storyline, a lot of information regarding the creation of the Offspring comes out in this book.  The truth creates whole new problems for the Offspring and introduces new and exciting characters in a series that I fully expect will get more exciting from here.

My grade for this is a C/C+