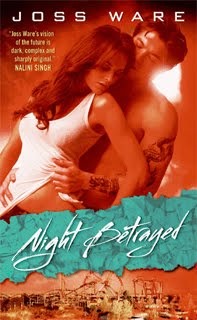 Everyday is still a struggle to stay alive in the fourth book of Joss Ware's post-Apocalyptic series.  Ever since the Change, the day where Zombies took over and society ended, those left alive are trying to put their lives back together.  For Theo Waxnicki his life will definitely never be what it once was.  On the day of the Change his body mutated to stop him from aging and to heal very quickly.  He's always seen his perpetual youth as a good thing until he meets Selena.  Known as the Death Lady, she feels uncomfortable being in a relationship with Theo because she thinks he's so much younger than she is.  As the mother of a young man, and with the serious job of guiding those who are dying towards a comfortable death, Selena feels the weight of the world on her and thinks Theo is only out for fun.  Also keeping them apart is their differing views about the Zombies, or Gangas as they're referred to in this book.  Theo wants to see all of them dead because he sees them as nothing but killers, whereas Selena sees the last remnants of their souls when she looks at them and puts her life in jeopardy every night to use a magic crystal to release them to their death.  Will these differing views be an insurmountable obstacle to their relationship or will a disturbing discovery about how new Zombies are created unite them to save a future they've just started to create?

To fully appreciate this book you need to have read this series from the beginning.  Theo's past is important to who he is now and it's touched on very lightly in this book.  Changes occur to him during this story that are mentioned once and then left hanging.  Because of how superficial he's discussed you never feel truly invested in what happens to him.  The same holds true for Selena.  Her reasons for needing to save the Zombies are never fully understood, even to herself.  This is very frustrating to the reader since the issue seems to be used only as a plot device to cause friction between Theo and her.

Other characters from previous books also show up during this story without much reason behind their appearance.  Most notably are the villains who show up to do something villainous for no other apparent reason.  It all leads to further frustration for the reader waiting for something to happen and questions to be answered.  With this book there was no storyline advancement, nor do you get a definitive resolution to Selena and Theo's relationship.

Fans of this series will want to read this to see the continuing adventures of characters they've seen before, but they shouldn't expect any earth shattering developments.  This installment felt more like filler than substance.  Those thinking of picking this up on a whim should definitely look elsewhere.  What is an intriguing idea for a series has led to a confusing and unsatisfying read that has me hoping the next book in the series will be more rewarding.

My grade for this is a D+