Review for Life After Joe by Harper Fox 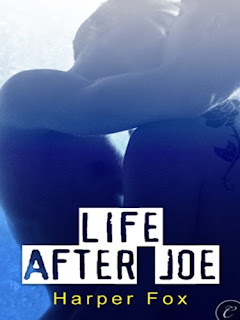 With much media talk surrounding the rights of those living an alternative lifestyle comes this beautifully written, highly emotional story about love and the loss of it.  Yes, this story is about a gay couple, but the grief of loss is the same for anyone.

This story is told from the perspective of Matt who is in a downward spiral after his longtime love Joe leaves him to try living a straight man's life.  This is devastating to Matt since they've been in each other's lives since they were young.  Even more devastating is that Joe has been cheating on Matt with a woman for years while their longtime mutual friend Lou knew about the affair but never told Matt.  Feeling betrayed by everyone, and by life, he starts to ignore his medical studies and goes out every night looking for love in all the wrong places.  But one particularly self-destructive night for Matt introduces him to Aaron, who's just in time to save Matt from getting a beating.  From that night of violence comes a slow road to recovery for Matt, and for Aaron too who's also dealing with grief.  The road is not without bumps though as Matt still has trust issues and an ex who still tries to control him.  But will a misunderstanding break them up or bind them together forever?

This book takes you on a very emotional roller coaster from deep feelings of loss to the joy of hearing I love you.  Matt and Aaron are such well-written characters that every emotion they feel you feel as well.  Every action and its reaction is believable and heartfelt.  I found myself teary-eyed more than once seeing how badly grief affected both of them.  For Matt especially, life has always been a bit hard since his youth when he realized he was different than others.  He took a lot of beatings for being gay and even his family was emotionally abusive in their views of his lifestyle.  Joe too was emotionally abusive, though Matt didn't see that until comparing his and Aaron's relationship to how he and Joe were together.  Joe was never comfortable being public with his lifestyle and slowly made Matt feel that way too.  Matt never had good self-esteem until Aaron encouraged it in him.  Matt sees Aaron as his Savior and that's very true.  Matt was very close to suicide because of all the negative feelings he carried around.  It wasn't until Aaron said he was too good for the grungy bars, and that he was worth waiting for, did Matt start believing it and start taking control of his life.  Aaron's pain wasn't as obvious to the reader, but the tension was there and bubbling under the surface.  It could be seen by the haunted look in his eyes and the greying hair and when he says to Matt that he understands what he's feeling, it's totally believable.  When Aaron's pent-up grief finally explodes though, you ache for him because the scene is so powerful and is one I'll never forget.  Seeing him unable to catch his breath, to shake with tears, is gut-wrenching and speaks volumes as to how strong the love was for his dead lover since this is its outcome.

This book was an amazing read that kept me quickly turning the pages to see what happened to these characters that I became totally invested in.  For those who don't normally read books featuring an alternative lifestyle, I can only hope you'll change your mind and take a chance on this truly rewarding book.

*Book was received from NetGalley with a cover photo courtesy of www.goodreads.com
at December 28, 2010