Book Spotlight on Scandalous Ever After by Theresa Romain (GIVEAWAY)

Readers who enjoy sensually-charged couplings will find themselves drawn to this tale of a widowed woman and the old friend who finally gets the chance to claim her.  Keep reading to get a tempting glimpse of Scandalous Ever After by Theresa Romain, along with Ms. Romain talking about her favorite summer activities, then add this suspenseful friends to lovers Regency-fueled romance to your bookshelf.  In honor of this second installment in the historically-set Romance of the Turf series make sure to fill out the form below for the chance to win two bundles of the first two books in this series too!

Two of Theresa’s favorite summer activities:
If I were creating the sort of profile I admire, I’d tell you that my favorite summer activities include splashing in the ocean, or camping in the backyard after having a barbecue. But the truth is that I’m hundreds of miles from the nearest beach, and my favorite thing to do there was always to make a giant dolphin out of sand. And I can’t bear to be outside in 100+ heat, especially when the mosquitos are biting.
However, there are so many lovely little things about summer that I do enjoy. Specifically...
1. Having more time to read. I might not be on a beach relaxing to the sound of waves, but that doesn’t mean I won’t have a book in my hand. The pace is a little slower in summer, and I love taking time to sprawl out on the couch and whittle down my TBR pile. (Just kidding. The TBR pile never gets smaller, because I never stop buying books.)
2. More flexibility in the schedule. Yes, my husband and I are still working, and sure, Little Miss R is still in school activities. But we can be more lax about her schedule, and there’s never any homework. That’s good news for the mom who wrangles all of the papers, as well as the kid who does the work.
In SCANDALOUS EVER AFTER, there are no frozen treats or backyard campfires—but there *is* a sea, and Lady Kate Whelan and Evan Rhys find themselves on a road trip of a lifetime. Between ferries and floods, treats and horses and races, sickness and health and more than one scandalous interlude, these two old friends will find a love they never expected—and unearth secrets they never dreamed of. I hope you’ll enjoy this romantic summer read! 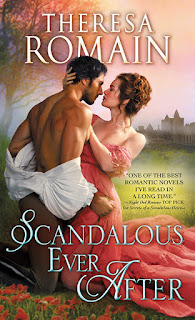 Does love really heal all wounds?
After being widowed by a steeplechase accident in Ireland, Lady Kate Whelan abandons the turf. But once her mourning is complete, her late husband’s debts drive her to seek help in Newmarket amidst the whirl of a race meet. There she encounters antiquities expert Evan Rhys, her late husband’s roguish friend—whom she hasn’t seen since the day of his lordship’s mysterious death.
Now that fate has reunited them, Evan seizes the chance to win over the woman he’s always loved. But once back within the old stone walls of Whelan House, long-held secrets come to light that shake up everything Kate thought she knew about her marriage. Now she wonders who she can trust with her heart—and Evan must decide between love and a truth that will separate him from all his heart desires.

“Kate, is all this for my benefit?"
“Why, what do you mean?” Seating herself on the red velvet settee, she hitched one leg up and spread the dressing robe about it. Then she lowered her leg again, crossing it over the other. Each time, pale flesh shone new and enticing through the shifting fabric.
The more she fidgeted, the more he wanted to gather her up in his arms and hold her. Settle her. Kiss her into calm and pleasure.
Lord. He was going to die in this room.
Already it had been a long day; agonizingly, sweetly long. They had stayed at the Rowley Mile’s rail for the day’s remaining races, though Evan couldn’t have sworn whether horses or dogs or monkeys ran the course.
No one else fell. He knew that much. One fall was bad enough.
Or had it been a blessing in disguise? Kate had been shaken, badly, at the sight of a prone body on a racecourse. But Evan could recall nothing so determined as the way she lifted her chin and decided to stick out the rest of the schedule.
Perhaps she saw nothing when she looked at the track. Perhaps she was in the Ireland of two years ago, remembering Con’s fall. But she had stood beside Evan and let him hold her, and he helped her not to be alone. Whether or not she knew it, she did the same for him.
“I was thinking”—she spoke again, still wildly rearranging herself on the settee—“that this could be the perfect arrangement. Two friends who care for each other very much, giving each other pleasure."
The breezy explanation was perfunctory, so much so that it took him aback. From the end of the settee, he peered down at her. “Is that what this invitation meant to you?"
“What else should it have meant?"
“I don’t know that it should mean anything at all.” He sighed, tucking himself beside her at the end of the settee. “Kate. If you want comfort, I’ll comfort you, as innocently as you like. I’m good at brushing hair."
Thunk. Her just-hoisted foot slid to the floor. “I don’t need my hair brushed."
“I could let you hold my hand, then. It can be comforting, holding a hand."
Her shoulders hunched. “I don’t need my hand held either."
“Good, good. As delightful as that can be, it loses its savor after a while.” He trembled on the edge of honesty, then tipped. “You seem—is this—are you trying to recapture some old closeness? Because I don’t think we--"
“God, no.” She laughed, a shaky, startled burst. “I don’t want to recapture anything, Evan. If I did, you’d be eating porridge, and I’d be sipping whisky, and... well. The whole day would have gone differently.” Her whole body seemed to flush. She was pink and cream, warm colors all over.
Not unaffected, then. He could draw her out. “The day of races?"
“The day of...everything. Today, I decided I was ready for a change."
“You were thinking of this sort of change,” he said. “Us. Alone. Tonight."
“I was.” She tied her dressing robe about her more tightly. “I could not stop, once the idea seized me. Damn propriety and all that sort of thing."
“Then why not untie the robe instead?"
“Well...about that. Now that you are here, I have started to...to think about what we might do."
“That sounds delightful.” He grappled with the weighty bolster at his side, tugging it free and flinging it over the arm of the settee. “Though from the mil- lion pauses in your speech, I wonder if it strikes you the same way."
“It...does. But I am so aware that you have seen me only in clothes--"
“As opposed to what? Mermaid skins?"
She sputtered. “Is that even a real—never mind... No. You know what I mean. This will be different."
“It will only be as different as you want it to be."
“Maybe. That’s what I was hoping. I want different.” She swung her feet, bare toes tapping the floor before the hearth. “Evan, I thought it would be easy. Being different with you. But now...I’m nervous. Are you?"
“No."
For the sake of graciousness, he probably should not have replied so swiftly. But nervous? Not in the least.
Nervous was waiting not once, but twice, to hear whether she would be safely delivered of a baby, or whether she would lose her life in childbed. Nervous was waiting, five years ago, for her ship to return her across the Irish Sea from her last trip to England.
Nervous was how he felt when her life was at stake. Now? He felt newly born, in all the frailty and triumph that the phrase implied.
“I’m not nervous at all,” he said. 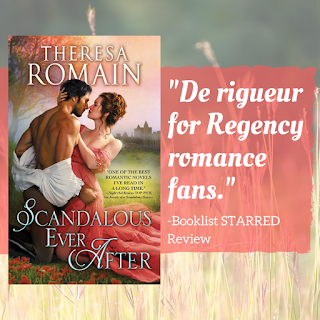 Historical romance author THERESA ROMAIN pursued an impractical education that allowed her to read everything she could get her hands on. She then worked for universities and libraries, where she got to read even more. Eventually she started writing, too. She lives with her family in Wichita, Kansas.