Two bruised souls, trying to hide their mutual pain behind their music, find unexpected comfort in each other's arms in this introspective m/m romance.  Keep reading to get a tempting taste of Escaping Indigo by Eli Lang, with its sensual romance set in the rockstar world, along with my impressions of it.  Learn even more about this book by visiting the other sites hosting this tour, then add this engaging romance to your bookshelf.  In honor of this first installment in the Escaping Indigo series leave a comment below telling me what you like about rockstar romances for the chance to win a $10 Riptide GC too! 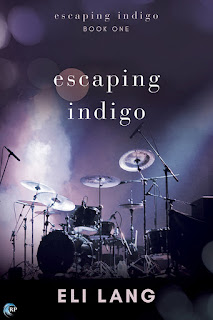 Micah thought he’d always be in a band. All he ever wanted was to play drums and make great music, but when his best friend and bandmate passes away, Micah is left adrift. The thing that’s always lifted him up is now a reminder of everything he’s lost.
In an attempt to put his life back together, Micah takes a job as roadie for his favorite band, Escaping Indigo. He’s always admired the lead singer, Bellamy. On stage, Bellamy is confident, glittery, and radiant. But as the two grow closer, Micah realizes that in person, Bellamy is quiet, introspective, and a little uncertain. And that’s the person Micah is falling for.
Micah is determined to know all of Bellamy, both the rock star side and the side hidden from the audience, the side that creates music that touches Micah’s heart. Bellamy has secrets of his own, though, things he doesn’t want to share with anyone. And trying to uncover Bellamy’s truths might be the thing that ends up pushing him away.

From the very first page readers will find themselves quickly caught up in the lyrical feeling of this story as two bruised souls find comfort in each other's arms.  It's a narrative told from the perspective of former drummer Micah who's lost his way after the death of his friend/bandmate.  Now a roadie for his favorite band Micah finds himself drawn to Bellamy, the quiet yet commanding lead singer of Escaping Indigo, and together they take readers on an emotional rollercoaster ride.

Micah once had dreams of making it big in the music world alongside his best friend, but with his bandmate's death he lost the fire to stay on the stage.  He can't leave music completely behind though and soon becomes a roadie for the band that's always brought joy to his soul.  It's a routine job until the night he enjoys a bit of solitude with lead singer Bellamy and as quiet talks led to heartfelt introspection a romance teeming with sensuality along with moments of heartache evolved.  Micah's clearly lost and lonely at the start of the story, full of what-ifs and what might have been.  The moment he sees Bellamy he senses a kindred spirit as one lost soul calls to another.  He's always been enthralled by his larger than life stage presence but it's his little boy lost personality that truly captures his heart and has him opening himself once again to the possibilities...possibilities of love as well as making music.  Micah's a caring soul who understands Bellamy's moods and is a strong support when he needs it most.  He asks tough questions of him, questions not easily or always answered.  When it comes to their relationship, it's one teeming with sensuality as well as doubts regarding their different statuses that puts readers through the wringer and culminates in a HFN.

Bellamy's the quintessential rockstar on stage, sexy and full of energy.  Off stage though he's a contradiction as his moods go from one extreme to another. He's clearly a tortured artist, talented but always needing to be better.  Fears and doubts constantly weigh on him and have resulted in issues with crippling anxiety that led to feelings of isolation.  Finding Micah gave him unexpected support when he needed it most.  It also led to hard questions regarding his mental health, and ways to help his moods, that often left me frustrated. Despite that, I still found myself just as enamored with Bellamy as Micah was. Bellamy's love of music is clear and it's a love that he desperately wants to reignite in Micah with scenes that depicted joy and helped Micah find forgiveness.

Through all Bellamy's highs and lows this was a couple meant to be together. Their encounters were teeming with sensuality and oftentimes more was expressed through a single touch and glance than with words.  Both had kind hearts and worried that their personal baggage would harm the other which led to lots of talks and introspection.  These talks were nicely balanced with a few steamy interludes as well as lots of sweet cuddling that made for a more realistic relationship.  The music world was vividly depicted too as moments on the stage were full of energy and eroticism while behind the scenes were endless miles of travel and boredom.  Escaping Indigo isn't a stereotypical band as there's no vices on display, just a deep-seated familial bond between the bandmates and their crew.  Issues of mental health were at the core of this story and while I appreciated Ms. Lang's addressing it, I was equally frustrated by the secretiveness and feeling of dirtiness surrounding Bellamy's anxiety. Despite that small criticism I found myself caught in this story's sensual haze through its lyrical storytelling.  Micah's inner dialogues were beautiful and gave deep insight into his heart and soul as well as helping readers better understand Bellamy.  This was a captivating series starter and I look forward to revisiting this couple and getting to know more about the other members of Escaping Indigo in the future.

My rating for this a B.

*I got this book from Netgalley for review in exchange for my honest opinion.

Eli Lang is a writer and drummer. She has played in rock bands, worked on horse farms, and has had jobs in libraries, where she spent most of her time reading every book she could get her hands on. She can fold a nearly perfect paper crane and knows how to tune a snare drum. She still buys stuffed animals because she feels bad if they’re left alone in the store, believes cinnamon buns should always be eaten warm, can tell you more than you ever wanted to know about the tardigrade, and has a book collection that’s reaching frightening proportions. She lives in Arizona with far too many pets.

-GIVEAWAY IS OPEN TO EVERYONE.
-To be entered, LEAVE A COMMENT TELLING US WHAT YOU LIKE ABOUT ROCKSTAR ROMANCES (ALONG WITH YOUR EMAIL ADDY).  NO EMAIL ADDY=NO ENTRY.
-To increase your chances of winning, comment at each of the stops on this tour.
-Winner will be chosen randomly from among each valid comment left.
-GIVEAWAY ENDS AT MIDNIGHT EST ON JULY 22ND.
at July 18, 2017