Rockstar romances are among my favorites and readers will get caught up in the glitz and eroticism of this tale of a former boy band member looking to reinvent himself and the woman who  gives him inspiration.  Keep reading to get a tempting taste of Come Back by Candy J. Starr, along with my impressions of it, and learn even more about this book by visiting the other sites hosting this tour.  In honor of this first installment in the Rock Savage series make sure to fill out the form below for the chance to win a $20 Amazon GC too! Asher Savage, you’ve probably heard of him. He was in that boy band until they broke up then he went totally off the rails. He wouldn’t even be on my radar except my editor offered me the ultimate bribe, working with the rock star of my dreams, if I spend a month photographing Savage’s come back. I’ll take the job but it’ll be pure hell until I get my reward. Savage’s charms will never work on me.
***
Women dream of me. Hell, they name their vibrators after me! I’d never met a woman who hadn’t fallen at my feet, until I got stuck with this hardass photographer. Alice Cain, she thinks she’s way too good for me, and God knows, she’s probably right. But I need her on side for my come back to be a success and I need her in my bed if I want to keep my ego intact. She will be mine.

The rockstar world is on vivid display in this fast-paced, erotically-charged tale of a former boy-band member trying to make a new name for himself in a hard-fought comeback.  Complicating his comeback is a sassy and sexy photographer who's a bit of a music snob and just using this job to get the one with the musician she's always respected.  The more time these two spend together the more their preconceived notions are proven wrong and the more attracted they become to one another before life and career gets in the way.

Ashe Savage never wanted to be a musician.  He just wanted to be a regular kid doing normal kid things.  His mother's aspirations though pushed him towards stardom, put him in adult situations, and sold his body and soul for fame he soon came to resent.  Years of living up to all the negative press has labeled him an arrogant, drunken, man-whore who walked away from his band in a diva-esque move.  Tired of living a life not his own he's now ready to start over, from his music to his image, to be seen as less of a joke and more as a real musician.  The moment readers meet Savage he's definitely still living up to his diva persona.  He's overly self-assured and hides behind a manufactured facade relying on his sexiness instead of substance.  His interactions with women, due to past heartache and betrayal, are of the one-night variety which perpetuates his arrogance in getting what he wants.  The moment he meets Alice though his life is turned upside down as she challenges and questions him every step of the way.  Being around her makes him feel safe in letting down his walls, has him willing to do whatever it takes to keep her in his life beyond the week her job slated, as he likes the man he's become in her presence.  He may have started out a bit of a douche, but by story's end I found myself captivated by the man behind the image and curious to see if he and Alice can find HEA over the long distances.

Alice Cain's always wanted to be a photographer and has finally made a name for herself in the music world for only working with true musicians.  She's serious about her career and is resentful at first having to work with Savage, but by doing so she'll get to work with a musician she's always been impressed by.  Though her week with Savage starts out rocky he soon starts charming her with glimpses of the man behind the facade.  His flirting starts out playful but his sensuality soon has her jumping him whenever she can in scorching encounters that start to take over the story.  As their week comes to an end his need to keep her close puts her job in jeopardy just as she discovers once again that a person's reputation doesn't define them in an ending that will leave readers frustrated.  Alice is a strong-willed woman who enjoys pushing Savage's buttons.  She discounts his talents early on but the time they spend together has her seeing a man full of heart and soul.  Just when she gets what she thinks she wants she'll realize the good thing she left behind in an ending that leaves readers counting down the days until the next installment.

This was a quick read full of erotic encounters and misjudgments.  Savage hates all those who carry cameras as invasive parasites while Alice only wants to work with REAL musicians.  Once they get to know one another though the story heats up as readers get to enjoy a sweet and sensual romance full of witty banter.  Theirs is a crackling connection, a sexy tug of war, that kept me invested in them and frustrated by the unnecessary cliffhanger.  I enjoyed Savages' evolution, getting to see his heartbreaking background courtesy of his mother's greed, and wish as much time had been spent on Alice.  Her character's appealing but not too distinctive which made me appreciate the colorful and complex Savage all the more.  From start to finish I found this an entertaining read that didn't need to end with a cliffhanger, and though this frustrated me it won't stop me from gobbling up the next installment once it releases! 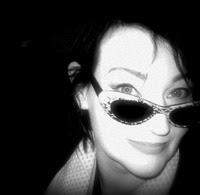 Candy J. Starr used to be a band manager until she realised that the band she managed was so lacking in charisma that they actually sucked the charisma out of any room they played. “Screw you,” she said, leaving them to wallow in obscurity – totally forgetting that they owed her big bucks for video equipment hire.
Candy J Starr has filmed and interviewed some big names in the rock business, and a lot of small ones. She’s seen the dirty secrets that go on back stage. She’s seen the ugly side of rock and the very pretty one. But, of course, everything she writes is fiction.