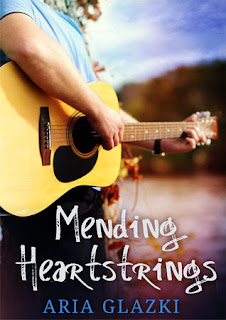 Kane’s a country singer who’s tangled with too many deceitful women. He’s learned his lesson: girls are for flirting and fun; emotions are for his music. But after spending a night with an earnest woman unlike any he’s known, he can’t force her out of his mind. So he goes in search of the woman he knows only as “Elle."
On her last night in Nashville, the staunchly pragmatic Sabella found herself in a situation more suited to a romance novel than reality. Swept away, she ignored her rigidly self-imposed rules, succumbing to the fantasy just this once. But she knows real-world relationships have nothing in common with their fictionalized portrayals. When Kane unexpectedly shows up at her Portland apartment, she must choose between the practical truths she has learned and the desire for a passionate love she has struggled to suppress.
Despite the distance, Kane’s tour schedule, and their meddling friends, both are drawn to the chance for a romance neither quite believes is possible.

As a fan of romances set in the music world I was immediately drawn to this tale of fears and past hurts and quickly became immersed in the lives of not only the appealing main couple but a secondary character too.  It's a sweet and sentimental tale full of realistic interactions, a touch of angst, and some sensitive handling of a serious issue that pulls at your heartstrings while leaving you cheering for everyone to find their HEA.

Kane's a country singer feeling like he's lost his spark until he sees a woman sitting at the bar who's unlike all the other women he's known before.  After a memorable night where they connect through words and sweet kisses he decides that he can't let her go. From the moment he re-enters her life readers are rewarded with a sensual romance that takes its time in developing, through normal outings to heartfelt talks theirs is a connection based on substance instead of sex.  When outside forces intervene will they be able to stay committed or will his fears and long distances pull them apart?  Kane's an appealing hero, talented with exotic looks.  He's been burned by women before, women who wanted him only for his name or his connections, which has him making assumptions far too quickly at the start.  When realizing his mistakes he doesn't hesitate in making things right which endeared him to me.  It's clear he's attracted to Bella though he never rushes her, never acts as if their relationship is lacking because they hold off having sex.  He's a true gentleman, treating her with respect and always having her in his thoughts when meeting groupies so she never feels doubt.  He has a kind soul, especially noticeable when helping Bella's friend Gina and it made him all the sexier.

Sabella's a freelance writer who's writing an article about country music even though she isn't a fan.  She is a fan of Kane's voice however and it's the foundation for an unexpected romance that evolves slowly and hits a few snags along the way because of his rash judgments.  Bella's an appealing heroine, strong-willed and focused on what she wants, who surprised me with a rash decision to get to know more about Kane.  While on the road with him she formed a bond with his protective bandmates that was cute and further enhanced her likability.  Her friendship with Gina also showed her to be a caring and supportive person who would do anything to save a person she cared about from harm.  Bella's a woman of values who doesn't see sex as something casual which had her delaying the deed until almost the mid-way point of the story. Though I normally like my romances more scorching, I didn't mind the sweetness of their relationship as the build-up was immensely satisfying.

On a whole this was an entertaining read with style and substance between an appealing main couple whose journey to HEA wasn't riddled with too many angsty roadblocks.  It was a fairly straightforward romance, a bit predictable at times, which isn't necessarily a bad thing as it was more like a comfortable blanket in knowing what to expect.  The romance itself is sweet with no erotically-charged encounters, they're more of the sensual variety which still made for a richly satisfying romance.  Nicely balanced with their romance were issues of fidelity and abuse, handled in a realistic and respectful way.  Along with this appealing main couple were an equally engaging cast of secondary characters who provided bits of humor and drama.  Kane's bandmates were an eclectic group, supportive of him as well as protective.  They test Bella at first but soon become almost brotherly in their playful interactions with her.  Bella's friend Gina is a memorable heroine too, outspoken and brash but hiding her own pain.  She's colorful in looks and speech and took over the scenes she was in which is why I'm pleased to see her take the lead in the next installment in this Forging Forever series.  Though it sometimes moved slowly I still found myself fully immersed in this romance and ultimately satisfied by the quickly resolved conclusion from an author readers will want to keep an eye on in the future.

*I got this book from the author for review in exchange for my honest opinion.
at July 05, 2017