A young woman fleeing a duplicitous Englishman finds herself in the wilds of Scotland and fighting her attraction to a sexy Scotsman looking to start over too in this exhilarating historical romance.  Keep reading to get a tempting taste of Between a Highlander and a Hard Place by Mary Wine, then add this sensual tale of opposites attracting to your bookshelf.  In honor of this fifth installment in the Highland Weddings series make sure to fill out the form below for the chance to win a copy of the previous book in this series too! 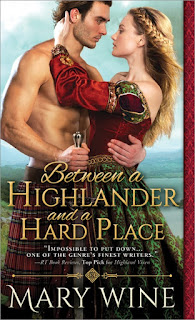 A fierce Englishwoman on the run.
A Highland Laird who needs a proper wife.
And a desire neither can resist.
Athena Trappes thinks she’s in love…until she discovers the scoundrel only wanted her as his bit on the side. Enraged, she does what any spirited Englishwoman would do: set fire to his belongings, incur his dangerous wrath, and flee—immediately. With nowhere else to turn, she seeks freedom in the wilds of Scotland.
Highland Laird Symon Grant lost his wife years ago, and it’s his duty to find another. Athena is not exactly what the clan has in mind for him, but Symon’s heart burns with unexpected passion for the woman who would risk everything to be free. 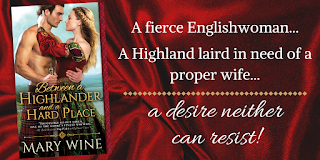 Mary Wine has written over twenty novels that take her readers from the pages of history to the far reaches of space. Recent winner of a 2008 EPPIE Award for erotic western romance, her book LET ME LOVE YOU was quoted “Not to be missed…” by Lora Leigh, New York Times best-selling author.
When she’s not abusing a laptop, she spends time with her sewing machines…all of them! Making historical garments is her second passion. From corsets and knickers to court dresses of Elizabeth I, the most expensive clothes she owns are hundreds of years out of date. She’s also an active student of martial arts, having earned the rank of second degree black belt.
While you are here, don’t forget to take a peek at all her intoxicating novels and also say hello at her blog!

a Rafflecopter giveaway
at November 04, 2018