A woman devoted to her disabled brother finds herself falling for the one man she swore she’d never give in to again in this sweet and scorching tale of second chances set in the hockey world.  Keep reading to get a tempting taste of Erik by Sawyer Bennett, along with my impressions of it, then add this second installment in the Arizona Vengeance series to your bookshelf! 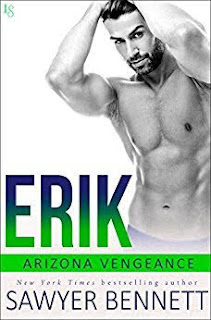 The Arizona Vengeance are developing a reputation on the ice as one of hockey’s top teams. But one player’s reputation off the ice might just keep him from scoring...
I’m having the time of my life with my new brothers on the Arizona Vengeance. We may be an expansion team, but after notching some big wins, the entire league knows to watch out for Erik Dahlbeck. That’s me.
The only person who doesn’t seem to think I’m so great? Blue Gardner, the hot-as-f*** flight attendant on our team plane. I sure wouldn’t mind joining the mile-high club with her, but besides bringing me lukewarm coffee, she won’t give me the time of day. Whatever I did to rub Blue the wrong way, my teammates think it’s hilarious. After all, we’re used to women flocking to us. #puckbunnies
When I run into Blue back on land, I’m shocked to learn how she spends her time off: taking care of her handicapped brother. There are layers to this girl I never imagined, layers I can’t wait to peel away. And that’s a new feeling for me.
But first I’ve got to find a way to melt that ice-cold stare. Because as much as I try to pretend I don’t care what Blue thinks of me, how can you not care when you’re falling for someone? 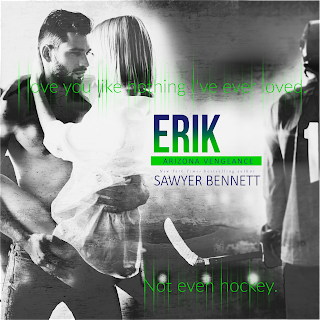 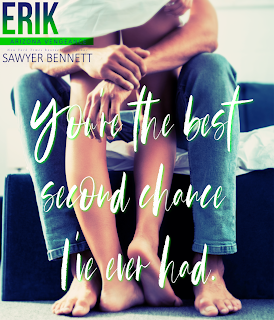 A former playboy finds himself attracted, and tongue-tied, by the strong-willed flight attendant who seems impervious to his charms in this sweet and scorching romance set amidst the world of hockey.  As a past one night-stand rears it’s ugly head though, both of them have to put the past behind them to make a meaningful future in a journey that has a bump or two along the way.

Hockey star Erik Dahlbeck grew up with a father who enjoyed the ladies.  He saw from an early age just how disposable women could be and throughout the early years of his career he treated women like Kleenex.  He’s older and wiser now though, and especially leery after a bitter woman’s accusations towards him and others on the team, and is no longer willing to waste time on superficial encounters.  The sizzling attraction he’s been feeling towards the Vengeance’s flight attendant especially has him rethinking his love life and has him going all out in a journey to win Blue over.  It’s a journey that shows him in an all new light, shows him to be kindhearted and generous with his time and money.  He lavishes attention on Blue, makes her feel like the center of his world in a slow and steadily-paced journey to HEA.  The previous book in this series showed him to be a carefree and fun loving player, but here he exudes a more matured persona.  He’s quick to jump in when Blue needs help with her disabled brother, but he does so to make things better for the both of them as opposed to just doing it to make himself look good in her eyes.  He shows a lot of substance throughout this story, a protective side and a desire to make things right for those wronged.  He quickly became the quintessential book boyfriend, with his words and deeds charming me every step of the way, in a story that warmed my heart while making me blush a time or two along the way.

Blue Gardner grew up as a nerd with awkward looks that had her being bullied, until the day she blossomed and captured all the boy’s attentions.  This blossoming changed her life dramatically, taking her to California and having her become a Party Girl.  It’s during that time that she first met Erik in an encounter that forever colored her impressions of him and has her still fighting her attraction to him now.  Time has changed her though, the death of her parents and taking responsibility for her disabled brother has changed her too, and it’s left her focusing on all work and no play.  She’s rather standoffish in her early interactions with Erik, guarded and judgmental over their previous encounter years ago.  In spending time with him though she discovers hidden layers, a kind heart, and a man who will do anything to make things easier for her.  Their relationship starts out slowly and sweetly with him showering her with attention.  He makes her feel important and well-loved, gives her solid support when she needs it most in a connection that warmed my heart.  Throughout her time with Erik it was her brother Billy who he also had to win over as he was a major part of her life.  Guilt over leaving Billy behind before has her overly protective now and rearranging her life to fit his.  It’s an admirable thing to do for her brother, but it also gave her an excuse when things got too serious in her relationship with Erik.  I admired her unconditional love for Billy but she also used him as a shield which frustrated me a bit as it made Billy look needy instead of a capable individual, as many disabled people are nowadays.  On a whole though I liked Blue and found her to be someone easy to relate to.  She was outgoing, socialable, and protective of those she cares about.  She could admit when she was wrong and it had me rooting for her after a knee-jerk reaction late in the story brought about her Grand Gesture to win Erik back.

This was a delightful romance full of heart and soul as a second chance to make a lasting impression led to an unforgettable journey to HEA.  Former playboy Erik has now become the kind of man you can depend on.  He no longer cares for superficiality and longs for someone with substance which is why Blue fascinated him so much and why he does all he can to prove himself to her.  He doesn’t rush their relationship which made their journey all the more fulfilling as they spent time growing closer.  Blue was a strong-willed heroine who, for the sake of her brother, was willing to accept all the help Erik offered to make things better for Billy.  Making Billy happy made her happy, and even though Erik used that fact to get closer to her at first, he also did it because he truly liked Billy.  At journey’s end this trio made for an intriguing family as Erik easily interacted with Billy and loved Blue all the more for her devotion to her brother.  Billy’s disability was seamlessly incorporated into the story and as a quadriplegic myself I appreciate Ms. Bennett bringing the realities of disability to light, warts and all.  Billy was an active participant in the action and I enjoyed his interactions with all the characters as it humanized them, showed those seen as playboys in a more positive light.  Along with this immensely appealing main couple came an equally likable cast of secondary characters whose stories are just being touched on here.  The men of the Arizona Vengeance are a larger than life group of hockey players, drool-worthy and protective of each other both on the ice and off.  The players who readers are introduced to are an unforgettable group and each one grabbed a piece of my heart as this series progresses.  The first to leave his mark is the outspoken playboy Dax, caught up in a tale told by a vindictive woman, who continues his playboy ways here while acting as the catalyst for another couple starting to get closer.  He was sexy and snarky and I look forward to the woman who will finally tame him.  Team leader Legend lives up to his name as all the women want him while he’s more than happy to prove his prowess.  His story, coming up next, promises to entertain as his new neighbor has undertaken a battle to get under his skin...and it seems to be working in a battle full of sexual tension.  The final player to pull at my heartstrings is Team Captain Tacker who’s still dealing with the grief of losing his fiancée in a plane crash in which he was the pilot.  The guilt is clearly taking its toll, the anger building as the usually calm hockey player gets suspended for fighting.  The time he spends with Billy, and the story he shares with Blue, gives readers deeper insight into his past and it had me aching for him and longing for his story to be told.  On a whole this was a beautifully paced story with a charming romance full of steam and smiles.  The action on the ice is exhilarating for fans of sports romances while the action off the ice will immensely satisfy all lovers of romance in another decadently delightful addition to the Arizona Vengeance series. 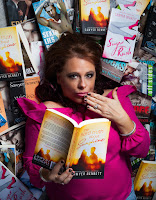