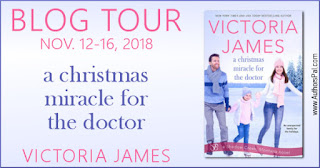 It’s a heartwarming tale of starting over and finding out what’s truly important in this small town romance set amidst the warmth of the holidays.  Keep reading to get a tempting taste of A Christmas Miracle for the Doctor by Victoria James, then add this sweet and sensual tale to your bookshelf.  In honor of this sixth installment in the Shadow Creek, Montana series make sure to fill out the form below for the chance to win a $15 Amazon GC too! 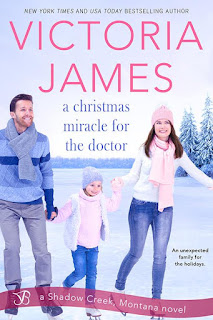 Fall in love this holiday season with this heartwarming story about finding romance, the magic of Christmas, and the importance of family...
Children's bookstore owner Addie Mayberry believes in the magic of Christmas. Or at least, she used to. So when a young customer needs some seasonal optimism, Addie sets out to give the vulnerable, heartbroken little girl the best Christmas ever. Which means helping the hottest man in Shadow Creek, Bella's surgeon father, find his holiday spirit. Addie's up to the challenge, but between tree decorating and late night talks, she realizes she's starting to fall hard for the one man she definitely shouldn't.
Drew Barrett drastically changed his fast-paced life when he moved back to Shadow Creek, but it was all worth it to give his daughter a better life. He wasn't exactly winning dad-of-the-year awards before, so he's determined to make it up to Bella. And with Addie's help, he's slowly repairing his relationship with his daughter. The last thing he wants is to fall in love, since that road only leads to pain, but he can't stop thinking about Addie. Not only is she gorgeous, sweet, and great with Bella, she fills something in him he never knew was missing. But Addie wants forever, which is more than Drew can offer…

“Thank you for staying with Bella,” Drew said. His eyes were filled with tenderness and his mouth had curled up into a hint of a smile that was just enough that she could justify her curling her toes.
“We had a fun time. She’s a really great kid,” she said, trying not to cringe at how breathy her voice sounded. She sat up a little straighter, tucking the blanket around her. She needed to leave. Like, go home. Because right now her thoughts weren’t on babysitting, they were on him and the fact that the vibe had changed and she really wanted to say…I don’t know what to do with when you give me all your attention and look at me like…like you want me.
“Thank you. She really loves her time with you. You…you came through for her at a time she really needed a woman in her life to show her affection. I won’t be able to make that up to you,” he said, his gaze dipping to her mouth.
“She makes it easy. I should probably get going,” she said, standing abruptly.
He stood beside her. “Sure. Of course. Are you okay?”
She looked up into his eyes. “I am, but I have to work tomorrow and it’s crazy early so I’m thinking I might as well use that time to prep some of the activities and sales I have coming up in the next few weeks.”
He took a step back. “Of course. I really didn’t mean to take up your time.”
She waved a hand and walked backwards, almost falling over the end table. He reached out to steady the lamp. “I’m fine. Did it stop snowing?” she asked, even though she could see perfectly well that it had.
“Yeah, the side roads haven’t been plowed so be careful,” he said, taking her coat off the rack and helping her into it. Oh boy, the gesture, coming from him was chivalrous and made her feel cared for. “I cleaned the snow off your car, so you should be good.”
“Thank you.”
“Addie…I...”
She turned around and looked up at him, knowing he was going to say he couldn’t have a woman in his life, but not wanting to hear him say it. “Sometimes I think…I think you’re a really nice man who needs to concentrate on rebuilding his life with his daughter,” her voice came out sounding breathy and for some ridiculous reason she kept looking from his eyes to his mouth.
He took a step closer to her and her heart pattered faster than what should be a healthy tempo. “What do you think the other times?”
She swallowed hard and looked him directly in his forest green eyes. “I think you should tell me what you think first.”
“All right. I think I came back home to get away from women and the kind of life I’d been living for the last ten years. I came back to try and fix my relationship with Bella and to give her a childhood closer to the one I’d had. I came back, determined to stay single. But then Bella ran into your store and the minute I saw you, I knew I was in trouble.”
He was maybe an inch or two from her now, surely close enough to see that she was on the very of hyperventilating. His voice had dipped low and seemed to scrape against all her nerve endings and stir that part of her that had been dormant forever. “But I can’t go back, Addie. I can’t trust someone with my daughter again. I can’t have another woman walk out on her.” He backed up a step, his strong jaw clenching and unclenched, regret stamped across his handsome face.
Addie forced a bright smile, one she’d perfected over the years for moments just like this. This one just stung the most. 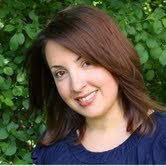 Victoria James is a romance writer living near Toronto. She is a mother to two young children, one very disorderly feline, and wife to her very own hero. Victoria attended Queen’s University and graduated with a degree in English Literature. She then earned a degree in Interior Design. After the birth of her first child she began pursuing her life-long passion of writing. Her dream of being a published romance author was realized by Entangled in 2012. Victoria is living her dream— staying home with her children and conjuring up happy endings for her characters. Victoria would love to hear from her readers!

a Rafflecopter giveaway
at November 14, 2018