Book Tour for Unscrew Me by Hayley Faiman (Review & GIVEAWAY)

A bad boy biker who’s heart has always belonged to another finds himself inexplicably attracted to a good girl teacher in this gritty and erotically-charged romance.  Keep reading to get a tempting taste of Unscrew Me by Hayley Faiman, along with my impressions of this MC romance, then add it to your bookshelf.  In honor of this first installment in the Savage Beast MC series make sure to fill out the form below for the chance to win a $50 Amazon GC too! 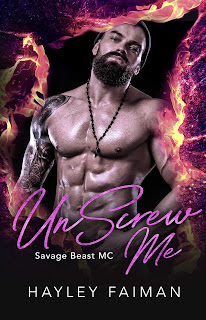 Thirty-two and single, Presley wants to start over. She’s only going through the motions--just breathing, not living. It isn’t the life she’s always imagined.
She should be married, with a little house and a few children, maybe even a Labrador to greet her after a long day of teaching third graders.
Treasurer for the Savage Beast MC, Silver lived life hard. At forty-five he’s seen and done it all--twice.
A single father in need of someone who could love him, and his boy.  He’s given up on ever finding a woman who fit him--fit them.
Two people breathing. Two people wanting to be loved. One an outlaw. One an innocent. Two people who could not be more opposite, yet when their worlds collide, so does their chemistry. 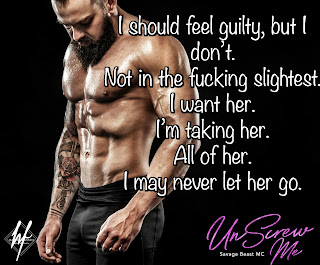 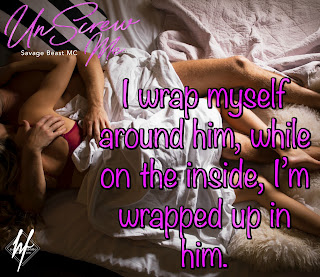 When it comes to MC-fueled romances I find myself drawn to the plethora of book series on the shelves and completely captivated by the danger and sensuality of the worlds depicted in these books.  It’s an action-packed world found in this series starter teeming with bad boys and the women who love them despite their questionable actions, especially when this story veers into misogyny a time or two.  Despite the occasional non-pc scene I was still fully invested in this tale and its hypnotic vibe.  The world seen here is raw, gritty, and demeaning, not for the faint of heart, but it’s memorable for its larger than life characters and pulse-pounding action.

Joel “Silver” Hernandez has loved his brother’s wife for over twenty years, would claim her if she’d ever put her missing husband’s memory to rest.  He’s slowly come to realize that his feelings are a lost cause though, moved on with another woman who left him too, but ultimately has been left with a young son he’s devoted to.  It’s only with his son Buster that he opens up his heart, as women have done nothing but disappoint him.  Just when he thinks his heart has completely closed off though, he finds himself utterly captivated by the sweet and sexy heroine who teaches his son.  Theirs is a relationship of opposites attracting as he’s very deep into the MC world of drugs and hookers, definitely not your typical white knight.  He doesn’t commit easily, has scenes with other women in the name of club business, but shows a kind heart when it comes to his son and in those quiet moments he has with Presley.  He’s not the kind of hero you admire, but he is a sexy hero you can’t help drooling over and who you know will protect you when you need protecting most.

Presley’s the sweet and naive new teacher in town.  Looking for excitement, looking to start living, she finds herself irrevocably drawn to bad boy biker Silver and quickly becomes entwined in his and his son’s life.  Presley has a big heart, sees the best in people, and very early on she becomes protective of Buster. Though she chafes at Silver’s alpha-behaviors she finds herself giving into him every time in a relationship that frustrated me at times as his overwhelming manliness had her caving far too often.  I like strong-willed heroines and far too often she fell from the mark as Silver would kiss all her concerns away.  Despite my frustrations, I still liked her and her strong support of Silver in seeing the good in him instead of the bad.  I also enjoyed her subtle mothering of Buster as he deserved a bit of softness in a world full of hardness that has him wise beyond his years.

This isn’t a story for everyone as there’s scenes with emotional triggers concerning sexual assault and drug abuse.  These scenes are hard to read at times but they realistically depict an MC who does what it needs to to prosper. While some books in the MC genre show clubs that have taken a more legal path, this one rings much truer in its dark and gritty depictions.  There is no black and white, just a story full of color and life.  The main characters aren’t always heroic but they did keep my eyes glued to the pages, gave me a few blushes along the way through erotically-charged encounters and lots of crass comments.  Along with Silver, readers are introduced to a few of his MC brothers who left an indelible mark on me and has me longing to see who brings Wolfe, Dragon, Coyote, and Taz to their knees.  These are man who’ve been in this world for most of their lives, been changed by it and desensitized, so I could understand why they did what they did.  I could get past their imperfections as their occasional heartwarming words and deeds would warm my heart.  They’re ultimately a strong and sexy group of men whose presence captivated me and whose stories I look forward to reading more about. 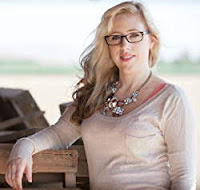 a Rafflecopter giveaway
at November 17, 2018