A man who enjoys the perks of being a star quarterback finds himself frustrated by his life and its lack of meaning in this tale full of heartbreak and loss that has him waging a sensual battle of wills against his new neighbor.  Keep reading to get a tempting taste of Snap Decision by Jami Davenport, along with my impressions of this book, then add this third installment in the Seattle Steelheads series to your bookshelf too! 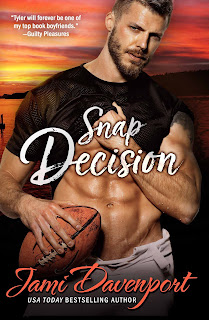 Bad boy quarterback Tyler Harris plays ball for a living and breaks hearts for a hobby.
With two championships in as many years, Tyler is the best quarterback in the league. Gorgeous and rich, he's at the top of his game. Women love him. Men want to be him. Only Tyler's not feeling the love. In fact, he's not feeling anything at all. Licking his wounds after a scandal and a breakup with his long-time girlfriend, he retreats to a run-down mansion on a remote island in the Pacific Northwest. Once there, Tyler is blindsided by the sassy redhead next door. He knows that he's met his match and possibly his soulmate. There's one problem. She despises him.
Lavender Mead has a good reason to dislike jocks, namely an absentee father who deserted the family to coach college football. Maybe that explains her penchant for bad boys -- especially those who play ball. Her new neighbor seems just that type. Yet Tyler's not the shallow superstar she expected, and she's inexplicably drawn to football's bad boy. The two are so hot together, they're combustible.
As the clock ticks down, can they commit to each other forever? Or will they both fall short of the goal at the last minute? 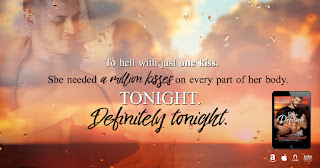 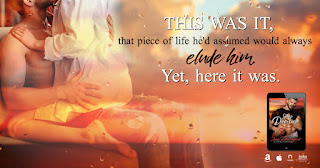 Readers will find their heartstrings being plucked throughout this tale of death and starting over.  For a couple whose first meeting is combustible, things take a turn into playful banter and sexual tension that kept their interactions entertaining in a story that kept me fully immersed in the outcome.  As they grow closer together though, the heroine’s fears put up a roadblock to their HEA where the hero will have to throw one last Hail Mary pass to win her heart.

Tyler Harris is a star quarterback who’s always enjoyed the benefits of fame...at least he used to.  Lately he’s just feeling lost and alone, frustrated by all the meaninglessness surrounding him.  With the deaths of two people close to him, he’s further spiraled into darkness and an act that lands him on the cover of magazines and as the top story on tv.  While he finds refuge in the home of his recently deceased uncle, he also finds a young woman just as disillusioned with the world as he is.  He also expects her to immediately fall for him, but she catches him completely off-guard by showing her anger in a combustible first meeting that takes an erotically-charged turn the more they see of each other. Tyler’s a bit of a bad boy at the start of this story.  He’s a bit arrogant, but flirty too.  The longer he’s in town the more he’s won over and the more determined he becomes to make his uncle’s dreams come true.  With each turn of the page we get deeper insight into Tyler’s heart.  We see a good man, who does good deeds, who just wants to be happy and fulfilled.  Being with Lavender gives him someone of substance, a person who sees past his playboy facade once she takes her own blinders off, in a sweet and sensual romance.

Lavender Mead’s had a difficult life because of the temptations of football that had her father leave to coach elsewhere and took away a man who professed his own love to her too.  She wants nothing to do with football players and her negative preconceived notions of them have her immediately on guard when she sees Tyler has become her new neighbor.  While she finds herself attracted to his sexy body, she’s at war with his arrogance and her belief that he didn’t care for his uncle (the man she came to see as a father-figure) and it has her waiting for him to fail in the bequest his uncle left behind.  Each interaction between her and Tyler is crackling.  In scenes that felt more like foreplay, their interactions jumped off the pages.  Through it all, Lavender gave as good as she got.  She wanted to believe the best of Tyler but fought often with herself courtesy of her past overshadowing the promise of a HEA.  Though her back and forth frustrated me at times I still enjoyed their interactions and erotically-charged encounters sprinkled throughout the story.

This was an entertaining story on a whole with a nice balance of heartfelt words and deeds as well as playfulness.  These two apparent enemies quickly became more in scenes that put a smile on my face and had me rooting them on every step of the way.  Surrounding this likable couple was a small cast of secondary characters, and a feisty cat, that pulled me into the small town atmosphere and helped craft this couple’s HEA in their own subtle ways.  Though there’s nothing ground breaking about this tale, it’s still an entertaining and well-crafted story that reached a very HEA.

My rating for this a B+

USA Today Bestselling Author Jami Davenport writes sexy contemporary and sports romances, including her two new indie endeavors: the Game On in Seattle Series and the Madrona Island Series. Jami’s new releases consistently rank in the top fifty on the sports romance and sports genre lists on Amazon, and she has hit the Amazon top hundred authors list in both contemporary romance and genre fiction multiple times. Jami ranked Number Seven on Kobo’s Top Ten Most Completed Authors, an honor bestowed on the year’s “most engaging” authors based on an average page completion rate by their readers.
Jami lives on a small farm near Puget Sound with her Green Beret-turned-plumber husband, a Newfoundland cross with a tennis ball fetish, a prince disguised as an orange tabby cat, and an opinionated Hanoverian mare.
Jami works in IT for her day job and is a former high school business teacher. She’s a lifetime Seahawks and Mariners fan and is waiting for the day professional hockey comes to Seattle. An avid boater, Jami has spent countless hours in the San Juan Islands, a common setting in her books. In her opinion, it’s the most beautiful place on earth.