Book Tour for The Other Miss Bridgerton by Julia Quinn (REVIEW)

It’s an exhilarating beginning between a young woman longing for adventure and a man forced into living a lie in support of his country in this historical romance that reunites readers with a family that has a permanent place on bookshelves.  Keep reading to get a tempting taste of The Other Miss Bridgerton by Julia Quinn, along with my impressions of this third installment in the Rokesbys series, then add it to your own bookshelf.  You can learn even more about this book by visiting the other sites hosting this tour too! 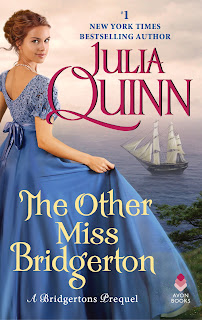 She was in the wrong place...
Fiercely independent and adventurous, Poppy Bridgerton will only wed a suitor whose keen intellect and interests match her own. Sadly, none of the fools from her London season qualify. While visiting a friend on the Dorset coast, Poppy is pleasantly surprised to discover a smugglers’ hideaway tucked inside a cave. But her delight turns to dismay when two pirates kidnap her and take her aboard a ship, leaving her bound and gagged on the captain’s bed...
He found her at the wrong time...
Known to society as a rascal and reckless privateer, Captain Andrew James Rokesby actually transports essential goods and documents for the British government. Setting sail on a time-sensitive voyage to Portugal, he’s stunned to find a woman waiting for him in his cabin. Surely, his imagination is getting the better of him. But no, she is very real—and his duty to the Crown means he's stuck with her.
Can two wrongs make the most perfect right?
When Andrew learns that she is a Bridgerton, he knows he will likely have to wed her to avert a scandal—though Poppy has no idea that he is the son of an earl and neighbor to her aristocratic cousins in Kent. On the high seas, their war of words soon gives way to an intoxicating passion. But when Andrew’s secret is revealed, will his declaration of love be enough to capture her heart…?

He motioned with his arm, urging her a few more steps forward. “Careful,” he murmured.
Poppy looked to her toes. The deck came to an abrupt halt in front of her, its elevation dropping by several feet.
The captain hopped down. “The beakhead, my lady,” he said with a gallant wave to the triangular deck that formed the pointy front of the Infinity. He reached up and placed his hands on her hips to help her down.
But when she was steady, he didn’t let go.
“This is as far forward as one can stand on deck,” he told her.
She pointed to a spot a few feet ahead. “What about—“
“As one can stand safely on deck,” he amended. He adjusted their position so that he was standing behind her. “Now close your eyes.”
“But then I can’t see the stars.”
“You can open them later.”
She tilted her head to the left, right, and back again, as if to say, Oh, very well, but she closed her eyes.
“Now tilt your head up. Not all the way, just a bit.”
She did, and maybe it was that motion, or maybe it was just because she’d closed her eyes, but she felt instantly off-balance, as if something far greater than the ocean had stolen her equilibrium. The captain’s hands tightened on her hips. “What do you feel?” he asked, his lips coming close to her ear.
“The wind.”
“What else?” She swallowed. Licked her lips.
“The salt in the air.”
“What else?”
“The motion, the speed.”
He moved his mouth closer. “What else?”
And then she said the one thing that had been true from the beginning.
“You.” 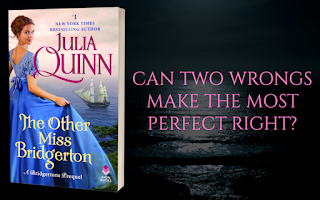 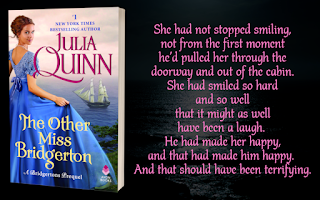 It’s an exhilarating read found amongst the pages of this historical romance that sweeps readers into a warm embrace with its sweet and sensual connection as two people longing for more find it in each other’s arms.  Just as they catch a glimpse of HEA though, the danger of his job pulls them apart and leaves readers on edge as the story races to its cheer-worthy conclusion.

Poppy Bridgerton isn’t your average heroine.  From the moment she was born she longed to be more, longed to learn more and soak up every answer to every question.  Being a woman makes it hard to gain that freedom she’s longed for though, keeps her from all the answers to love and life, and in this story it has her tied up and kidnapped by a pirate living a life she’s only read about.  While many heroines might be reduced to tears, Poppy soaks up every facet of the journey and shows herself to be strong-willed.  She wanted to live a life of excitement...and oh my goodness is this journey full of living!  She discovers more about the world in that small cabin she’s being held in, learns more about matters of the heart from a pirate who’s not all that he seems, and it made for an empowering and endearing journey.  Poppy’s a breath of fresh air, always thinking and quick to take a chance when given one.  Every new experience brought out joy in her and put a smile on my face.  Her attraction to Andrew came upon her slowly, brought out a playful side at first before the sexual tension kicked in in a relationship that captivated me yet frustrated me too for how long they danced around their attraction before giving in.  On a whole Poppy became an unforgettable heroine, protective of others and willing to fight for her HEA in a story that had me cheering her on every step of the way.

Andrew James has always felt restless.  Even as a boy he longed for something beyond what could be found within his own backyard.  He went from being a soldier traveling the world to wage war, to recovering from an injury that changed the course of his life, to becoming an even more vital piece of the war through his ability to charm.  It’s a talent that has him living a life of lies, lies towards both himself and his family.  What was once exciting now feels like a burden and it’s keeping him from the HEA he sees the more time he spends with Poppy.  He sees her as nothing but trouble the moment they meet, but as the days pass he finds himself opening up to her like no one else.  She challenges him, she gives as good as she gets in their verbal battle that felt more like foreplay.  Being around her reminded him of what it means to be a gentleman, both the good where he does whatever he needs to to protect her and the bad where he’s left fighting an attraction he’d much rather give in to.  This fight within himself made him immensely likable and easy to relate to though.  On a whole he was a drool-worthy hero who embraced the pirate facade but remained a good man which made his interactions with Poppy all the more heartwarming.

From the first page to the last this was an exhilarating thrill ride, the journey of a lifetime for two souls longing for more.  It’s a journey full of heart and soul, a slow-burn romance that kept me wholeheartedly invested because of its witty banter and crackling connection between an immensely appealing main couple. Romance with a bit of suspense is perfectly balanced in a story that’s a delightful addition to the Bridgerton family saga, who make a rowdy appearance towards the end, to wrap this up with a bow and has me counting down the days until we revisit this likable family.

JULIA QUINN started writing her first book one month after finishing college and has been tapping away at her keyboard ever since. The New York Times bestselling author of more than two dozen novels for Avon Books, she is a graduate of Harvard and Radcliffe Colleges and is one of only sixteen authors ever to be inducted in the Romance Writers of America Hall of Fame. She lives in the Pacific Northwest with her family.