Unexpected friendship leads to more in this charming sports-fueled romance between an average woman and a star hockey player.  Keep reading to get a tempting taste of Victor by Brenda Rothert, along with my impressions of it, then add this third installment in the Chicago Blaze series to your bookshelf! 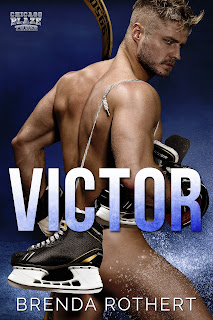 He’s a hockey star with a headboard full of notches. She’s a shy NHL concession worker at who’s never been kissed.
Lindy
They don’t call me Belinda Boring for nothing. It’s my name, after all. And for a 23-year-old with plain brown hair who still lives at home and gets tongue tied over nothing, it’s a fitting one. I’m not even one of those quiet girls with a hidden talent, unless making a mean order of nachos at the NHL arena I work at counts. My life consists of working, reading and harboring a secret crush on a hockey player who doesn’t know I exist. At least, until we accidentally meet and become unlikely friends.
Victor
I’m living the dream. A poor kid who worked his way into the NHL, I’ll never forget where I came from, though I try to. My past follows me, a nagging reminder that I’ll never be what everyone thinks I am. As the threat of my secret being exposed looms closer, my game slips, leaving me in danger of being cut from my team--the only family I have. I’m losing my hold on everything when a new friend helps me find hope. She’s nothing like the women I’m used to, but by the time I figure out that’s exactly why she’s right for me, I’ve lost my chance with her. Somehow, I have to convince a woman who thinks she’s invisible that she’s the only one I see. 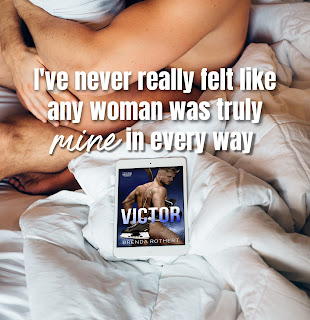 Readers looking for a sweet and carefree read will get just that with the unexpected romance between star hockey player Victor and the easily forgettable Lindy.  They start out as friends in a slow and steady journey to become more in a tale that warmed my heart and put a smile on my face as Ms. Rothert took her time in making them a couple, letting their connection grow organically with very little angst along the way.  Along the way readers get an update on past couples while being introduced to new players that promise to melt the ice as I greedily count down the days until we revisit this team.

Victor Lane came from humble beginnings with a past he’d like to keep in the past.  He’s reached the top of his sport and should be thrilled, but there’s something clearly missing.  There’s something affecting his game that’s bringing his past back to haunt him while he desperately tries to keep it hidden. Threatened with losing his starting position he finds an unexpected ally in the one woman everyone ignores and as they spend more time together he finds himself unable to forget her in a sweet and sensual connection.  On a whole Victor’s an immensely appealing hero, one that’s down-to-earth, and who’s a great match for Lindy as the two of them find much common ground.  He enjoys being with her though and doesn’t want to jeopardize their friendship, but with their time together empowering her he’ll have to step up to keep her by his side.

Lindy Boring is easily forgettable, at least to others.  Her life doesn’t lend itself to boldness as she lives at home, works behind the counter at the arena, and doesn’t speak out...and oh yeah, she’s a virgin.  She’s the exact opposite of Victor but one late night at the arena has her words of wisdom helping his game and from there their connection only grows.  Lindy’s a delightful heroine who’s had a crush on Victor for years but never felt able to do anything about it.  For now she’s content with just being friends as their unwavering support of each other drives their connection and gives her the courage to go out with someone else.  It’s a choice which leads to an endearing decision by Victor that warmed my heart and wrapped this story up with a bow.

Much about this book is familiar, many of the interactions and the overall storyline readers have seen before, but what’s here is well-crafted with charming encounters and endearing banter.  Victor and Lindy are a delightful duo with a slow-burn connection that drew me in completely.  Action on the ice was nicely balanced with time off the ice too to make fans of sports romances and contemporary romances both happy.  Surrounding this likable main couple was an equally likable cast of secondary characters to keep me turning the pages with delight.  Lindy’s father was a true gem and their interactions warmed my heart while making me laugh a time or two.  I also loved seeing the other Chicago Blaze players, loved getting an update on Anton and Luca, and look forward to seeing new players in the future in a series that continues to satisfy!