Blog Tour for Only Between Us by Sarah Fine (Review & GIVEAWAY)

It’s a gritty and romantic tale as two people with painful pasts continue to struggle while finding support in each other’s arms.  Keep reading to get a tempting taste of Only Between Us by Sarah Fine, along with my impressions of it, then add it to your bookshelf while it’s priced at 99 cents.  In honor of this first installment in the Starving Artists series make sure to fill out the form below for the chance to win 1 of 4 print sets of the three books in this series too! 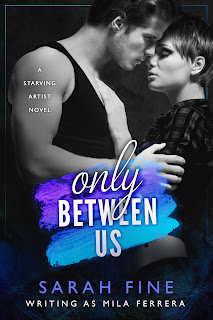 Bestselling author Sarah Fine presents an emotional standalone novel sure to thrill new adult romance readers everywhere.
Will they be strong enough to hold on?
Last semester, Romy escaped from an abusive relationship with the guy she’d thought was the man of her dreams. This semester she’s putting herself back together, determined to reclaim her passion for art and for life. When she signs up for a painting class at the local art co-op, the possibility of passion becomes very real — in the form of her teacher, Caleb. Both mysterious and seriously hot, Caleb bares his soul on his canvases, and Romy’s fascinated by what she sees.
Caleb is just trying to keep his head above water. Caring for his traumatized, unstable sister is getting harder every day, and his paintings are so dark and bleak that no one is buying. Teaching classes at the co-op is no longer enough, and now he’s going to have to sell more than just his art to the wealthy, sex-starved women in his classes. But when Romy comes along, she makes everything more complicated. She sees the truth in his paintings — a truth no one else has realized, until now.
Romy and Caleb might have a real shot together — one that could heal them both. But when ghosts from their pasts re-emerge, determined to keep them apart, will they be strong enough to hold on to each other? 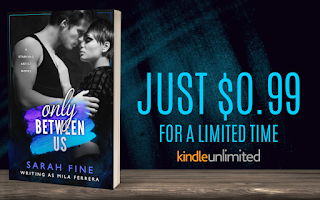 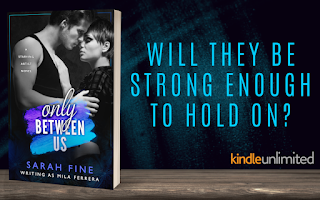 Some books take hold of your heart, making you feel invested in the outcome despite all the emotional pain along the way, and this book does just that.  From the very start I felt every hurt, felt every frustration, but by the turn of the final page I was left cheering.  It was a bumpy journey to HEA, one that I felt exhausted (but immensely satisfied) by, in this New Adult romance set in the art world.

Caleb’s childhood was a rough one as he had to helplessly stand by while his young sister was being molested by their step-father.  Fear held him silent for months before his ultimately telling the truth ripped their family apart and led to him being blamed for it all.  He’s carried the weight of guilt ever since, has sacrificed everything to make amends and help his very damaged sister Katie live out in the world, and it made for very difficult reading at times.  When readers first meet him he’s barely hanging on financially as an artist.  He teaches classes, occasionally gets money from his mother and older sister (who belittle his artistic dreams before handing it over), but it’s clear that he needs more money for his sister’s therapy which means giving “private” lessons to the cougars taking his art classes.  While his fellow artists see the cougars as harmless fun and beneficial to their careers, Caleb’s sickened by the thought of sacrificing the only things he has left...his body and its free will.  He’s in a very dark place at the start, made to feel responsible for every bad thing that befell his family, and those negative thoughts permeated his art and the images he created spoke more than words did at times.  Meeting Romy is the lone bright spot for him and as they grow closer together their hearts quickly became entwined.  He senses she’s just as damaged as him in some ways and together they become each other’s port in the storm, blocking out all the other hurtful things surrounding them.  When they grow so close that they don’t see a future without the other though is when hard truths about his obligations and her issues with her ex come to the forefront as their HEA hangs in the balance.  I adored Caleb, he’s sweet and sexy, and I wanted to hug him repeatedly as he went above and beyond for his sister.  His family had no shame in using his guilt and kind heart to keep him chained to Katie, no matter how emotionally cruel and manipulative she and they were to him.  It took a lot for him to finally go after Romy as he never felt worthy enough, not in matters of the heart or when it came to his art.  Any small victory he achieved was quickly marred by his family and led to lots of frustrations for me while reading.  True happiness for him was being with Romy as she believed in him wholeheartedly and her encouragement and acceptance of him made me like her all the more which had me cheering his finally standing up for their future late in the story.

Romy has her own painful past she’s still dealing with after becoming involved with an abusive yet charming man who her parents adored but who battered her self-esteem, isolated her from her friends, before taking out his anger on her physically.  She thought she’d left him behind, cut him out of her life in order to regain her own life again, but as the story progresses it’s clear that he won’t let her get away so easily.  Though she’s still leery of men, and hesitant to start any new relationship, she can’t help but be attracted to Caleb.  His art calls to her as she sees her own feelings reflected back at her through his work and this is the foundation to their angsty journey to HEA.  Being with him brings out a protective side in her and her care and defense of him had me rooting for them every step of the way.  Through all the emotional highs and lows I found her a likable heroine, one with a big heart who’s still learning to stand up for herself.  When it comes to Caleb though she will do anything to bring happiness to his life and be a strong support to him as he needs it now more than ever.  Her scenes with her ex were very tense too, kept me on the edge of my seat, and the process of bringing him to justice was vividly depicted to show how slow the road to justice can be.

On a whole this was an intense read, a darkly-toned tale that pulled at my heartstrings, one where I quickly came to adore the hero and admire the heroine despite how bleak things felt at times.  Caleb was put through the wringer courtesy of his manipulative family and his sister’s mental illness and I found him easy to relate to as my own family is currently dealing with this too.  My heart ached for him, for how low his family let him fall, and even though they tried to redeem themselves late in the story I never bought into their apology and assume that they’ll go back to their past actions before long.  The older wealthy women in this story also enraged me and didn’t care how manipulative they were being either.  They didn’t care about these young artists at all and their actions left a bad taste in my mouth.  Despite these frustrations I still enjoyed this story and the near-perfect romance between Caleb and Romy as they were a strong support to each other, making sacrifices every step of the way to prove their love.  I found their relationship a mature one where they actually talked through things.  Through his art and his deeds he showed how much he cared for Romy, while she was the one more likely to use words in a nicely balanced romance full of sensuality.  Surrounding this immensely appealing main couple was an equally entertaining cast of secondary characters that captured my attention.  Romy had a strong support system courtesy of her gay friend Jude and his boyfriend Eric, a relationship where they unwaveringly defended her and that brought a smile to my face.  Caleb too had a small but supportive group of friends, fellow artists like Daniel and Markus, who were sexy and showed surprising insight when it was most needed.  Daniel especially captured my attention as he was flirty and carefree in how he lived his life, but when helping Caleb he could show a serious side that spoke volumes.  Fans of New Adult romances will find this an entertaining and rewarding read, heavy at times in its depiction of mental illness, but full of heart and soul to have me more than ready to pick up the next installment in this series!

SARAH FINE is the author of several books for teens, including Of Metal and Wishes (McElderry/Simon & Schuster) and its sequel, Of Dreams and Rust, the bestselling Guards of the Shadowlands YA urban fantasy series (Skyscape/Amazon Children’s Publishing), and The Impostor Queen (McElderry, January 2016).
She is also the co-author (with Walter Jury) of two YA sci-fi thrillers published by Putnam/Penguin: Scan and its sequel Burn. Her bestselling adult urban fantasy romance series, Servants of Fate, includes Marked, Claimed, and Fated, and was published by 47North in 2015, and her second adult UF series —Reliquary (and its sequels Splinter and Mosaic) was published 2016. When she’s not writing, she’s psychologizing. Sometimes she does both at the same time. The results are unpredictable.