It’s a sexy and thrilling read for a woman who once had it all and the dragon shifter with his own painful past in this final tale in an entertaining sci-fi series.  Keep reading to get a tempting taste of Ki’s Redemption by Keri Kruspe, then learn even more about this book by visiting the other sites hosting this tour.  In honor of this third installment in An Alien Exchange Trilogy make sure to fill out the form below for the chance to win a $15 bookstore GC too! 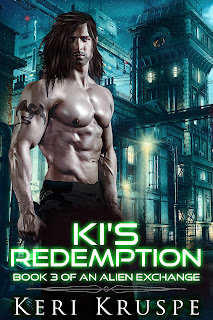 Sexy Aliens/Sassy Dragons
Earth’s fate rests in the hands of shape-shifting dragons, studly aliens, and a determined woman who demands a say in her own fate. In this exciting finale of the An Alien Exchange trilogy, follow their adventures across the galaxy to a tale that features mounting action, stimulating passion, and heart-pounding emotions.
Sherrilyn Marie Cantor firmly believes success doesn’t come to those who sit around and wait for it to show up; it takes determination, discipline, and hard work. At thirty-four, she has it all – a successful business and more money than she can spend until a jealous partner sets her up and frames her for stealing trade secrets. She loses everything and faces a twenty-year federal prison sentence. When an unexpected offer to find “love among the stars” comes her way, she doesn’t hesitate to escape her unjust fate and leaves Earth forever.
A Zerin descended from a secretive line of dragon shapeshifters, M’alalu (Ki) Ki E’eur ignores the fact he’s living a half-life. Broken from childhood guilt for the murder of his parents and six year-old sister, he silently goes through the motions of everyday life. A former mercenary and friend of the crown prince of Zerin, Ki absorbs a debt his prince intended to take. He’s expendable; the prince isn’t. Now he’s in the crosshairs of a power-hungry despot determined to overthrow the current democratic galactic government.

“Don’t do that.”
The masculine whisper feathered against her neck. His massive arms tightened around her. Wisps of warm breath fanned her sensitive skin. The clean musk of his mesmerizing scent sent a thrill down her spine. In reaction, she grasped a steel forearm, not sure if she wanted to get loose or pull them closer.
“Do what?” A scratchy rasp came out before she cleared the lump from her throat. But really, her nightly fantasy personified held her close, how could she not move? Her stomach tensed as a large palm encircled her waist while the other hand rubbed the top of her thigh. She shivered, eager for more. Maybe being stuck in the small space was a good thing.
“Stop moving.” His wicked whisper accompanied his tightened grip. “It’s hard for me to think when you do that.”
“Is that so?” She ran a tongue across dry lips before giving him a coy smile over her shoulder. Yeah, something was hard, all right. She turned around to hide her smirk. Mr. Prickly might not like being seduced. What? Since when did she want to pursue the attraction between them? But then again why not? He triggered something inside.
Every time she came near him a jolt zapped her hands and feet straight to her gut. Then her stomach drops like she’s in a car going over a hill quickly. Yeah, the tension between them was hot.
Hot enough to for her to go up in flames and take him with her. Definitely time to get the man on board with the program. She slid backward to rub against his erect cock. The movement sent a sizzle of lust down her spine. Damn, she liked being a girl.
His nose caressed the sensitive area behind her ear.
“Naughty girl.”
A rough, slick tongue suckled her lobe.
“It’s like that, is it?” 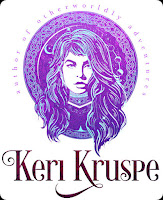 A native Nevadan, Keri resides with her family in the wilds of Northwest Michigan where she enjoys the stark change in seasons and the pleasures each one brings. An avid reader, Keri loves an enjoyable bottle of red wine, a variety of delicious foods and watching action/adventure movies…usually at the same time. You can find her most days immersed in her fantasy world on her latest novel while foot tappin’ to classic rock. When not absorbed in her writing, Keri works alongside her husband in building their dream home or discovering intelligent life in America in their RV.