A man trying to break free from the obligations of his mafia family is becoming ever more desperate to claim the science-minded woman who’s time with him is coming to an end in this sexy and suspenseful romance.  Keep reading to get a tempting taste of She’s a Spitfire by Chloe Liese, along with my impressions of it, then learn even more about this combustible read by visiting the other sites hosting this tour.  In honor of this second installment in the Tough Love series make sure to fill out the form below for all readers to have the chance to win a $25 Amazon GC or for US readers to have the chance to win signed print copies of the first two books in this series too! 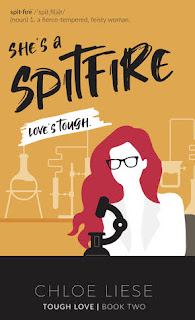 One fiery-haired, sexy scientist finds her perfect complement in a dark and handsome soccer star. Opposites attract, and they’ve got chemistry that’s explosive—literally.
Physics calls it entropy. Philosophy calls it Murphy’s Law: If something can go wrong, eventually it will. Professionally and personally speaking, Zed’s familiar with the principle. After a decade of trying to alter the atomic makeup of the mafia from its nucleus, now he’s set on leaving The Life and pursuing his heart. Problem is, the sassy, hot-headed spitfire he can’t quit is meddling in his slow burn escape plan, and turning it into full-on combustion.
Not to mention, Nairne’s got a painful history she won’t talk about and more secrets than she has lab instruments—which is really saying something. In an ideal world, the bad boy footballer would follow the brainy beauty overseas and they’d live happily ever after. But Murphy’s Law is proven true, as Zed finds his world imploding and his escape plan foiled. These enemies turned lovers end up discovering how costly it can be to meet the right person at the wrong time.
A present he can’t escape.
A past she can’t forget.
A future they won’t stop fighting for.
They say all’s fair in love…and war.

Not having read the previous book in this series I was worried that I’d be missing out on something when picking up this book, but in Ms. Liese’s talented hands I quickly became captivated by the sizzling romance between this unforgettable couple.  I became wholeheartedly immersed in Zed’s desperate plan to get away from his mafia family ties and was on constant edge as danger came slowly creeping back to put Nairne’s life in jeopardy.  As their romance continues to crackle their connection is put to the test from those close to them as well as from unforeseen events that made for a rocky road to HEA.

Zed’s a man clearly torn by his loyalties as he desperately wants to leave his mafia past behind, helping the government behind the scenes to make that happen, as he wants to make a life with Nairne.  His love for his parent’s legacy though has him trying to make the Family walk a more straight and narrow path when an unexpected event binds him even tighter to the Family.  It ultimately becomes a battle between his plan to claim the love of his life, Nairne, while trying to deal with the memories of a past that refuses to stay in the past.  I was drawn to Zed from the very start as he’s a sexy soccer star with a strong sense of family...for better or worse.  He tries to do right by everyone and I ached for the situation he found himself in because of it.  With time running out before Nairne leaves Zed becomes a man possessed in his interactions with her and it made for even more sizzling scenes and even more heartfelt introspection of his feelings for her that warmed my heart.  He’s a commanding presence throughout the story, trying to change things to his advantage while treating Nairne as his equal in a relationship that I rooted for every step of the way and that I look forward to seeing more of.

From the moment she rolled on to the scene Nairne became an unforgettable heroine, one I found myself completely drawn to for Ms. Liese’s realistic portrayal of disability and sexuality.  It’s a portrayal that pulled no punches, and in one particularly personal scene, the strong and unwavering connection between her and Zed was on blatant display as she let him see a previously hidden personal care.  It spoke volumes that Zed saw this moment as being given an honor instead of something that made her appear weaker.  Throughout this story Nairne’s a strong-willed heroine with a dark and painful past that’s left its indelible mark as she doesn’t see love as lasting. That’s why she’s been content with a timeframe on their relationship.  With that time coming to an end though she’s now starting to feel frustrated and goes behind Zed’s back in an attempt to extricate him from his mafia ties.  It’s just one of the many twists and turns that don’t go as planned in a tale that constantly kept me on edge.  Through everything though Nairne appeared invincible, knowing her limitations but being a force of nature who was always seen as an equal to Zed.  Even when her stalker returned I knew that she’d fight with everything she had not only for herself but to keep Zed safe too in this story’s conclusion that had me holding on for dear life.

Readers will find this a near-perfect sequel with a decadently delightful balance of sexiness and suspense.  The world of the mafia is vividly portrayed here, the colorful players involved in a bloody and unexpected war over control, as Zed tries to extricate himself from the life.  These machinations were fast-paced and kept me guessing until the very end.  Along the way was a steamy romance between a sexy athlete with a questionable past who’s just trying to do right and the disabled woman trying to leave her own dark past behind.  Theirs is a combustible connection where each gave as good as they got in erotically-charged scenes, with a little bit of bdsm, to steam things up even more.  It’s a rocky road to HEA for them too and I ached for both of them as they merely wanted to love each other, but fate and danger were around every turn to keep their HEA hanging in the balance.  Along with this appealing main couple were two equally memorable secondary characters who enhanced every scene they were in.  Nairne’s best friend Elodie was just as smart and strong-willed as her, supportive when needed but willing to call her out on her crap when necessary.  Their friendship shined and I found myself wishing for friends just like them as the portrayal of their closeness endeared both of them to me.  Zed’s fellow soccer player Lucas was a fun and flirty character, a man of wealth set on taking over the family business, and their exchanges put a smile on my face.  They were supportive of each other with Lucas being given bits of insight into Zed’s life away from soccer and his willingness to help made me like him all the more. I also look forward to he and Elodie coming into contact with each other more as there’s definite sizzle between the two.  Finally, as a quadriplegic I must commend Ms. Liese for her handling of Nairne’s disability.  It was done realistically, respectfully, and shows that we can be worthy heroines too and I’m now left waiting with bated breath for the final book in this series! 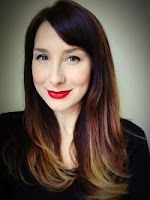 Chloe’s always been a sucker for a suspenseful steamy romance, ever since she managed to find the one saucy mystery series hiding in her high school’s prim little library. Nothing drives her crazier than a story that cranks up the heat, then closes the door on the reader’s face, so don’t read her books if you don’t want to know what actually happens when the lights fade to black...
When she’s not writing, Chloe’s busy reading books of all genres, rereading Harry Potter (which she can’t help but make her characters similarly obsessed over), and playing catch-up with her bad@$$ little girls. She’s also been known to scramble around the pitch for a pick-up soccer match and run along the river while dreaming up her next book.