Readers will find much to entertain them in this New Adult tale of friends becoming something more as a fake relationship brings two opposites together.  Keep reading to get a tempting taste of Jock Romeo by Sara Ney, along with getting my impressions of it, then add this sixth installment in the Jock Hard series to your bookshelf too! 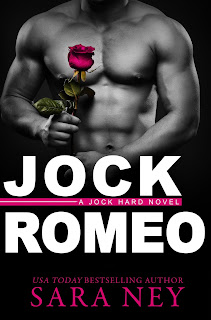 HE IS THIS STORIES LEAST LIKELY ROMEO.
Roman Whitaker is every girl’s best friend. An easy going nice guy, Rome is brilliant and funny. At the age of twenty-two, he’s moving out of his parents’ house for the first time and into off-campus housing with two complete strangers.No more Mister “Playing it Safe.”Rome may be wicked smart, but math and science will only get him so far, and they certainly won’t land him a first date with the girl of his dreams.For that, he’ll get a little unwanted help from his friends—and meddling family members.YOU NEVER FORGET A FRIENDLY FACE.Lilly Howard is tired of being taken for granted. After breaking up with her philandering boyfriend, she’s giving up guys and learning to love herself again.She’s sick of playing nice.When she bumps into Rome, they become instant friends. When he asks her to be his fake girlfriend to keep his family off his back, she agrees—but only if he’ll return the favor... 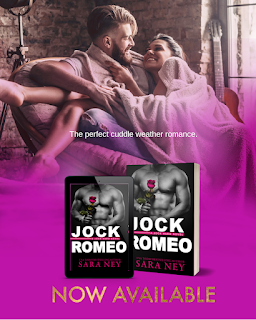 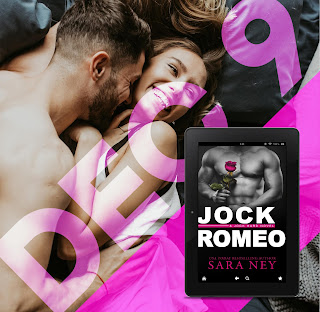 MY IMPRESSIONS OF THIS BOOK:
From the moment I saw the premise of this book I was hooked!  With its Sheldon Cooper-ish hero, and a heroine who's more than what she seems, readers will be charmed by their slow burn romance while finding numerous laughs along the way.  By the turn of the final page you will find yourself immensely satisfied with a big grin on your face and ready to see where this series takes you next.
Roman Whitaker is the proverbial nerd with his dedication to school and family.  He's a bit socially awkward too, doesn't do hookups, and is easily intimidated by gorgeous women.  He's a man of science, an all-around good guy who has helped his mom bring up his younger brother and care for his elderly aunt.  His freshman year of college is when he finally gets to spread his wings...and along with moving into his own place is his earth shattering introduction to cheerleader Lilly.  It's a crackling night of opposites attracting where the nerd and the pretty pom-pom pusher find an instant connection, where hours of talking have them sharing all sorts of truths about themselves.  It's three years before they meet again though and this time their long-smoldering connection has their friendship becoming a fake relationship that slowly evolves into something more. All along the way I fell more and more for Roman.  He was utterly adorkable and endeared himself to me as the story progressed.  He's shy, sweet, yet respectful of women and supports his family in any way he can (sometimes to the detriment of himself). He's a perfectly imperfect hero and is the newest addition to my list of book boyfriends!
Lilly Howard seems to have it all.  She's pretty and popular, a cheerleader with a sparkling personality who has lots of friends but who's definitely tired of men who want her for what she is rather than who she is on the inside.  She's tired of living the life her mother wants for her too and I was immediately cheering her on to start living life for herself.  Her first encounter with Roman sees two people with self-esteem issues sharing things with one another that they never had before with anyone else.  Three years later that connection is still there and as fake becomes all too real readers will be held captive.  With each turn of the page Lilly's a wonderful heroine, immensely likable and easy to relate to, and I cheered her on as she brought a breath of fresh air to the sometimes overly serious Roman's life.  They were a delight to watch grow stronger together, witty banter with sizzling undertones, all which made me love this duo even more!
On a whole this was a slow burn romance of opposites attracting and the fake relationship that finally had them giving into what was obvious to readers from the start. Along with an appealing main couple was an equally likable cast of secondary characters, from Roman's younger brother Alex to his new roomie's Jack and Eliza (the couple from a previous book who I loved seeing where they are now), there was a sense of family that warmed my heart while making me laugh at their meddling in the couple's growing connection.  The best character though is Aunt Myrtle, Roman's sassy and spirited elderly aunt, a woman with no filter who says whatever she wants...and much of what she said had me roaring with laughter while blushing too.  A book with just her taking center stage would tickle me pink as I would love to be her when I grow up!  Though this book started off a bit slow I still found much to like about it.  From its crackling main couple, to its slow burn evolution of friends to lovers, to secondary characters who could've easily stolen the show, this was an endearing rom-com that warmed my heart and has me excited for what Ms. Ney has planned next!
My rating for this is a B+
*I got this book from the author for review in exchange for my honest opinion. 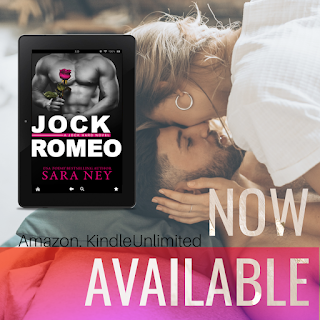 AUTHOR INFO:
Sara Ney is the USA Today Bestselling Author of the How to Date a Douchebag series and is best known for her sexy, laugh-out-loud New Adult romances. Among her favorite vices, she includes: iced latte's, historical architecture and well- placed sarcasm. She lives in the Midwest, collects vintage books, art, loves flea markets, and fancies herself British.  For a list of cities/venues Sara will be signing at, or to purchase signed books, please visit her website HERE.
NEWSLETTER  |  FACEBOOK  |  INSTAGRAM  |  TWITTER  |  BOOK+MAIN  |  PINTEREST  |  BOOKBUB AUTHOR PAGE  |  GOODREADS AUTHOR PAGE
at December 09, 2021