Readers will be charmed by this tale of pen pals becoming something more in this romance set in the rockstar world.  Keep reading to get a tempting taste of Stone Cold Notes by Julia Wolf, along with getting my impressions of this next installment in The Seasons Change series, then add it to your bookshelf! 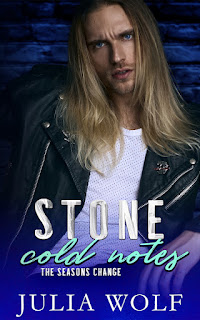 They called him Stone Cold.
Once upon a time, I called him my pen pal.
When I wrote to Callum Rose five years ago, I never expected a response. He was an up and coming rock star, afterall, and I was just a shy seventeen-year-old. He did write back though, and through hundreds of emails, we became best friends.
Until the day we unknowingly broke each other’s heart.
It’s been three years since our last email. I’m all grown up with a new job at Good Music, and finally have my act together. But then Callum Rose walks in the door, and I’m instantly thrown back to the days when he meant everything to me.
The thing is...he doesn’t know who I am. He’s never seen my face. And this Callum Rose lives up to his stone cold reputation.
That is, until one night, he sees me in another man’s arms, and decides to claim me. Then there is nothing cold about him.
Callum becomes a man on fire for me, introverted, awkward, chubby Wren Anderson. He’s obsessive, possessive, and kind of stalker-y—and I like it...a little too much. The problem is, he still doesn’t know I’m the girl who walked away from him or the reason behind it, and I’m afraid when he finds out, I’ll be right back in the cold again.
FIND AT GOODREADS here.
BUY here. 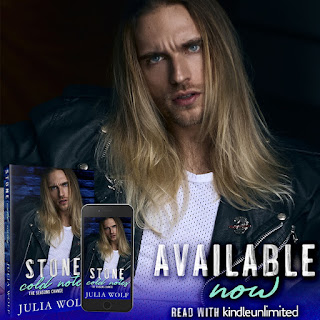 MY IMPRESSIONS OF THIS BOOK:
As a fan of rockstar romances I couldn't wait to get my hands on this book.  What I expected of it, and what I got though, were two very different things courtesy of an absolutely wonderful main couple and numerous unexpected twists and turns.  From the first page to the last I was charmed, while my feelings were put in a blender courtesy of a backstory that hurt my heart and a journey undertaken now that kept me guessing.
Callum Rose and Wren Anderson met online as teen pen pals, forging a connection that bent but didn't break over the year and a half they corresponded through e-mail. Throughout that time they shared everything.  They formed a connection as shy, introverted teens...one of them on the cusp of fame...and it was a delight reading their e-mail exchanges.  Seeing them grow closer had me falling for them too and it was heartbreaking when their relationship got put on pause. Leaving readers in tears, life went on for these two as Callum became a bona fide rockstar...a rockstar with an air of mystery, a guarded personality, that has you longing to learn more about him.  There were big life changes for Wren too when readers see her again.  She's now a single mom, working at the record company that Callum's band is working with.  She's still a bit introverted, but she's a tough cookie when need be and I found her a very likable heroine.  Callum doesn't recognize his old friend at first but the instant connection between them is more than obvious to readers and when he sees her with another man his caveman instincts kick in.  And those instincts are delicious as he becomes determined to claim Wren.  He's possessive, not willing to take no for an answer, but you can't help being drawn to him as this strong side is beautifully balanced with a sweet side that he's kept buried until Wren's return.
On a whole this is a compelling read with unforgettable characters and a romance that pushes every emotional button.  It's sweet, sexy, and a bit dark at times, but Ms. Wolf juggles every feeling with style and substance.  The banter between Callum and Wren just felt real, a bit of heart and soul along with a bit of spice, and the journey they undertook held me captive.  The inclusion of Ezra, Wren's young son, and his place in their journey made me smile throughout interactions that brought out a tender side to Callum and endeared me to him too.  The glimpses we got of the other band members of The Seasons Change has me hopeful that we'll be returning to this world soon as there's plenty of stories left to tell and in Ms. Wol's talented hands I wholeheartedly recommend this series!
My rating for this is an A.
*I got this book from the author for review in exchange for my honest opinion. 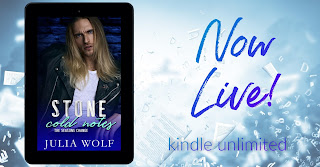 BUY THE PREVIOUS BOOK, FALLING IN REVERSE, IN THE SEASONS CHANGE SERIES here. 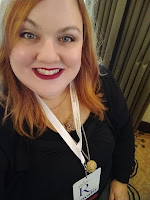 AUTHOR INFO:
Julia Wolf is a lover of all things romance. From steamy, to sweet, to funny, to so dirty you’ll be blushing for days, she loves it all.
Formerly a hair stylist, she spent years collecting stories her clients couldn’t wait to spill. And now that she’s writing full time, she’s putting those stories to use, although all identifying characteristics have been changed to protect the not-so-innocent!
Julia lives in Maryland with her three crazy, beautiful kids and her patient husband who she’s slowly converting to a romance reader, one book at a time.
TIKTOK  |  FACEBOOK  |  BOOKBUB  |  INSTAGRAM  |  TWITTER  |  FACEBOOK READER GROUP
at December 02, 2021