A woman from a wealthy family begins a fake relationship with a man who's the exact opposite of who her family wants for her in a romance that soon becomes all too real.  Keep reading to get a tempting taste of Avery by Kat Savage, along with getting my impressions of this third installment in the Men of Bird's Eye series, then be sure to add this tale to your bookshelf! 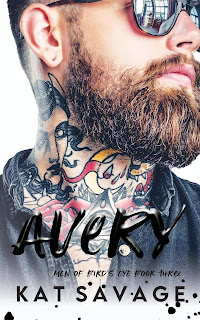 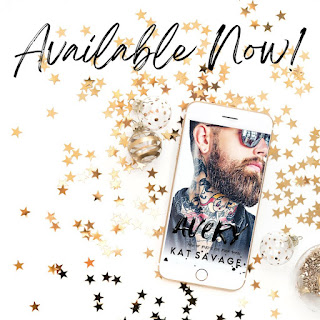 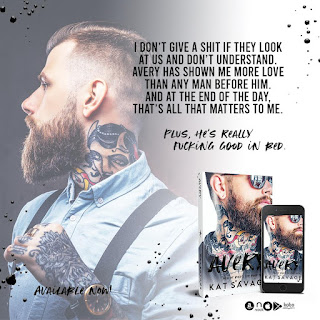 MY IMPRESSIONS OF THIS BOOK:
As a fan of opposites attracting I immediately fell in love with this story and its wonderful main couple whose fake romance soon becomes all too real.  From the very start readers realize that there's more to these two than meets the eye, that what they're showing the world isn't who they are in a steamy and decadently delightful romance.
While reading the previous book in this series I was drawn to the glimpses we got of Avery and couldn't wait for his story to be told.  It's a wait that was definitely worthwhile as this was a charming story with a drool-worthy hero with a hidden heart of gold.  From the outside Avery's a bit guarded, a bearded man with a big wall around his heart courtesy of his parent issues.  On the inside though is a good man with a kind and caring heart, a man who charmed me with each word and deed of his.  He quickly becomes the next book boyfriend you'll want to add to your list.  Because of his parent issues though he's sworn off love, but fate decides differently once rich woman Helena comes into his tattoo parlor.  The connection between them is crackling from the very beginning...and once Helena asks him to be part of a fake relationship to help her out, things turn even hotter.
Helena Davenport has been trying to prove something to the world, that she's more than capable of running her father's company.  As proof, she shows the world a buttoned-up and serious-minded woman.  Behind that facade though is a woman who enjoys tattoos and rock music, a self-assured woman ready to show the older board members what's what once she starts her fake relationship with Avery.  Helena's a wonderful heroine, immensely likable and non-judgmental, and I was rooting for her non-stop to prove those doubting her wrong.  She and Avery are a perfect match!  They started out as friends with playful and witty banter that made me smile and kept me glued to their journey to HEA.
From the first page to the last, this was a story full of delights.  From witty banter to interludes that were sweet and sexy, I thoroughly enjoyed this main couple.  Their scenes made me smile, made me swoon, and endeared them to me.  With each turn of the page I found more and more to like about this book as there was virtually no angst to clutter up the story.  On a whole Ms. Savage has crafted a definite winner that I highly recommend and I can't wait to see where she takes readers next!
My rating for this is an A.
*I got this book from the author for review in exchange for my honest opinion. 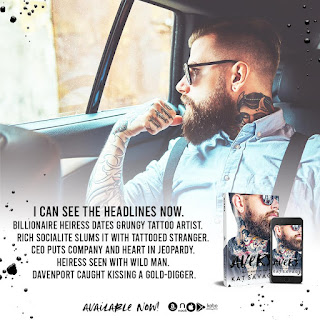 AUTHOR INFO:
Kat Savage resides in Louisville, Kentucky with her three beautiful children, her hunky spouse, and two spoiled dogs. She secretly has hope of getting chickens one day.
By day, she’s an office manager, pushing paperwork and daydreaming. When she’s not at her nine-to-five, she’s writing. Or thinking about writing. Or preparing books and book stuff. Or quite possibly, designing stuff for other people’s books.
She was driven to writing out of a need for distraction and self-preservation after the death of her sister in 2013. Since then, it’s snowballed into a full blown passion she can’t escape. Even on the toughest days, she wouldn’t want to.
She writes poetry packed with real, raw, and sometimes ugly truths. She won’t lie. Her goal is to make you ache, in that perfect delicious way we often secretly crave.
Shortly after putting her poetry and prose out into the world, she turned to novel writing. Savage is a natural storyteller, getting better with each book. She tries to give the characters in her novels depth, whether they’re serious or comical, she builds them in layers with the hope that you see a little of yourself in some of them.
WEBSITE  |  NEWSLETTER  |  FACEBOOK  |  FACEBOOK READERS GROUP  |  TWITTER  |  INSTAGRAM  | GOODREADS AUTHOR PAGE  |  AMAZON AUTHOR PAGE  |  BOOKBUB
at December 02, 2021