Book Blurb Blitz for Vanessa Jared's Got a Man by LaQuette (GIVEAWAY)…..

A woman finds herself seeking payback from her ex after discovering he not only stole her heart, but her grandmother's ring, courtesy of a sexy sheriff showing up on her doorstep wanting her help to save his sister.  Keep reading to get a tempting taste of Vanessa Jared's Got a Man by LaQuette, then discover even more about this book by visiting the other sites hosting this tour.  In honor of this debut contemporary rom-com make sure to fill out the form below for the chance to win a $30 bookstore GC too! 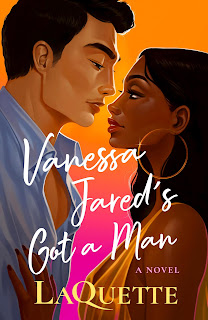 Vanessa Jared, a 40-something divorcée, decided that the best way to pull herself out of their post-divorce slump was to form The Savvy, Sexy, Singles Club and start the "Do Me" portion of her and her friends' lives.
But on the two-year anniversary, a sexy sheriff shows up on Vanessa's doorstep wanting her to help him keep his little sister from marrying her no-good ex. Vanessa is not down for this at all. She wants nothing to do with her ex...until she spots a photo of her ex's new fiancée wearing her grandmother's ring—which he clearly stole from her. So now it is on. Vanessa is ready to take this trifling (fill-in-the-blank) down. What she does not expect is to fall in love along the way.
EXCERPT:
“I’m kinda wondering why such a good guy would try to sidestep the advances of a woman he admits is beautiful.”
He didn’t know what came over him, except the fact that his common sense exited and his ego stepped up front and center. He came from around the counter, meeting her on the other side, stand- ing as close to her as he could.
To her credit, she wasn’t the least bit put off by his proximity as she leaned into him.
“The thing that makes me good at my job is that I love putting puzzle pieces together to figure out what makes people tick. Once I put all the parts together, I can figure out what motivates folks to do some of the drastic things they do.”
He lifted his hand, slowly pushing the sleek strands of her hair behind her ear, letting his thumb settle at the edge of her jaw.
“Call me old-fashioned.” His voice was a low rumble he almost didn’t recognize. “But I like to do the chasing when I’m interested in a woman.”
She lifted a skeptical brow as they continued their stare-off. “So, you’re not into strong, independent women who know their own minds? You need a docile woman to make yourself feel like a big man?”
“I want nothing less than a strong, independent woman who knows her own mind.” He paused a moment to let his words settle in. “Only I want to put all the pieces together and figure out what she wants before I make a move. I want her to know her worth and make me chase her like the queen she knows she is. I want her to make me work for it. Where’s the fun in having you if I didn’t have to actually put in any work to get you?”
It didn’t escape him that his pronouns for this imaginary woman had switched from third person to second in the span of a few words. He wasn’t even sorry enough to explain he was speaking in generalities to try to cover it up. They both knew he wasn’t, so what was the point. Fire flashed in her eyes, and as sure as he knew his own name, he recognized it for what it was: desire.
He leaned in, noting how bad an idea this was as he did. Then again, watching her lean in as well, he didn’t give a good goddamn. Her plush mouth was slightly parted, and he could feel the drum of her pulse beat faster and harder at her neck. Bad idea or not, there was no way in hell he was giving up the chance to know how that mouth would feel against his.
“Stop me now if this isn’t what you want?” He was gone, intoxicated by his growing need for her. Still, even at the height of this building lust, he wasn’t so far gone that he would ever do this against her will.
“If it wasn’t what I wanted, I’d tell you.”
That sharp tongue was so sexy, and he’d bet all he had that that would be even more true once he tasted it. 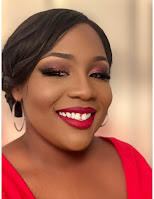 AUTHOR INFO:
2021 Vivian Award finalist and DEIA activist in the romance industry, LaQuette writes bold stories featuring multicultural characters. She crafts dramatic, emotionally epic tales that are deeply pigmented by reality's paintbrush.
This Brooklyn native's novels are a unique mix of unapologetically sexy, stylish, & sensational characters who are confident in their right to appear on the page.
​She is the 2016 Author of the Year Golden Apple Award winner & the 2016 Write Touch Readers Award winner. Writing—her escape from everyday madness— has always been a friend and source of comfort. At the age of sixteen, she read her first romance novel and realized the genre was missing something: people that looked and lived like her. As a result, her characters and settings are always designed to provide positive representations of people of color and various marginalized communities.
She loves hearing from readers and discussing the crazy characters that are running around in her head causing so much trouble.
AMAZON AUTHOR PAGE  |  WEBSITE  |  INSTAGRAM  |  TWITTER  |  AUTHOR YOUTUBE CHANNEL
**********GIVEAWAY**********
a Rafflecopter giveaway
at November 29, 2022