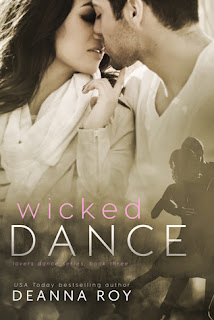 If there’s one thing that chases you and never lets you go, it’s fame.
Despite being a painfully shy and sheltered ballet student, three months ago I charged onto one of the most popular TV reality shows in the world and changed the course of five lives.
Mine, when I accepted the star of the show, Blitz Craven, as my lover and dance partner.
Blitz’s, just as he was about to walk away from his hard-won career.
And three girls who were the finalists on the show.
Those girls are back to get their vengeance, and as usual, the producers of the show are in it for the ratings.
So now I have a choice: let each of them have another shot at my lover.
Or take them on myself.
But Blitz is mine.
Game on.

Just when the chaos of her ex-boyfriend's return seemed to be calming down, Hollywood once again came calling to interfere in the happiness Livia and Blitz have found with each other.  Living and loving together, while giving private dance lessons to her birth daughter, has become a happy way of life for the two of them and it's sad to see them being manipulated by those more concerned with money and fame than their HEA.  As they head west to finish their commitments their relationship will be put to the test, as will her own self-esteem and trust in the former partying playboy who's clearly fallen for her, in this well-paced romance.

With a legal threat that could make him pay out millions, Blitz is left no choice but to return to the stage where he'll once again encounter the catty and angry women he spurned for Livia at the previous finale.  He won't be alone though as she'll be dancing right alongside him in a contest voted on by tv viewers.  THEY KNOW they love each other and are committed, but will the public see them as the perfect couple too?  It's a question that hangs over every word and through every dance move as their love affair continues to play out on national television.  With others trying to manipulate both of them in the name of ratings though, discomfort will arise and trust will be questioned as nothing is as it appears when it comes to reality television.  All the worst aspects of the genre are on display here as Giselle pours on the melodramatic act in a catty attempt to gain popularity, while the editors cut and splice scenes to leave every act in doubt.  Every sweet and sincere moment of affection Blitz shows Livia felt tainted by their being on the show which had me hoping for a quick journey to the show's finale.  Throughout the journey Ms. Roy gave a vivid depiction of what goes on behind the scenes, the chaos and the manufactured glamour, the very UN-real qualities of the participants themselves.  Through it all Blitz reminds readers of who holds his heart.  With patience and encouragement he helps Livia cope with a world she's never experienced before and was her support when her self-esteem gets rattled.  Livia really came into her own in this installment.  I was a bit frustrated by her actions in the previous book as she was a bit wishy-washy, but here she's far more composed.  She thinks things through before acting on impulse which is good as those around her try to manipulate her and Blitz's connection.  She goes outside her comfort zone, pushing her father's condemnations aside, to be a more accomplished dancer and to prove to herself that Blitz is her perfect partner in a competition full of over-the-top antics and sensual dances.

From start to finish this was another satisfying addition to the Lovers Dance series.  It's Blitz and Livia against the world as they dance one more time to reaffirm their love and commitment to each other with the country watching on.  The bright lights and glamour of Hollywood may offer a temptation but it's clear that the only thing tempting them is each other as seen through their numerous frantic and steamy encounters.  The world of reality television takes center stage here and is shown warts and all, as are the other three desperate women vying for fame and fortune.  They're an unlikable and stereotypical bunch whose melodramatic and catty actions wore a bit thin, but they ultimately all got what they deserved.  There were some bright spots in this world, some supportive people who helped keep Livia sane and focused on the truth instead of the contrived drama, and I enjoyed those few friends she found when her innocence led to disillusion.  I look forward to where Blitz and Livia go from her as their love for each other grows even stronger.  With two more books in this series I'm sure Ms. Roy plans on putting them through the wringer a few more times, but I'll gladly be there every step of the way as we creep closer to their final bow!

*I got this book from the author for review in exchange for my honest opinion.
at May 30, 2017