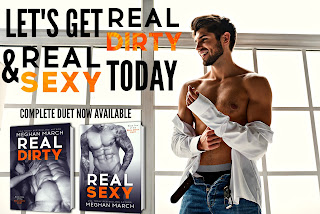 The chaotic and sexy journey to HEA comes to an end for a country superstar and the down-on-her-luck bartender whose life changes dramatically from the moment she meets him.  Keep reading to get a tempting taste of Real Sexy by Meghan March with its scorching romance set in the world of country music.  Get my impressions of this second installment in the Real Dirty series too, then add it to your bookshelf! 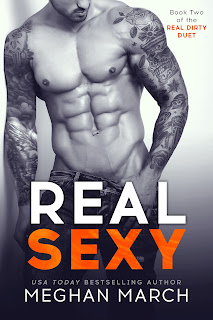 In Nashville, country stars are a dime a dozen.
I swore I’d never get caught up with one, but Boone Thrasher made a liar out of me.
I said I’d never put my heart on the line, but he didn’t ask before he stole it.
Now we’re facing my worst fears, and we'll see if this country boy is tough enough to see it through.
Girls like me don’t get happily ever afters...but maybe he’ll prove that wrong too. 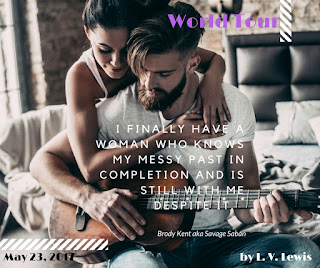 After his future was left hanging in the balance with the arrival of the police at the end of Real Dirty, things quickly pick up from there as Ripley's family issues start affecting his career and start weighing on their relationship.  Despite that Boone proves his devotion in a million different ways, both subtle and overt, that endeared him to me even more.  He supports her through every bump in the road and encourages her to go after her dreams.  He knows she's the one for him but it will take a lot to convince her of that.  When a visit back home and a random act leaves his life in jeopardy the truth of his feelings for her changes things irrevocably as it's clear that their being together is no longer casual.  Boone's a sexy beast with a bad boy persona that masks a kind heart. He's a bit of a momma's boy, loves his family, and isn't shy in lavishing his wealth on those he calls family.  He's a delicious hero who never wavers in his feelings for Ripley and goes out of his way to make all her dreams come true which makes him the quintessential book boyfriend that readers will be swooning over.

Ripley's life has been tragic from the day she was born and it's negatively colored her outlook on life and love ever since.  From finding her mother's dead body, and being forced into cleaning up the blood, to a father who physically and emotionally abused her from birth she's had a feeling of hopelessness.  She feels that nothing good is meant for her and that anything she touches will be left in ruins.  That feeling gains strength with her cousin's charges against Boone and the resulting fallout in the press tainting his character.  Her first instinct is to run but Boone only stays closer than ever in his attempts to win her over.  Taking her to meet his family, and her fear over almost losing him in a freak accident, finally brings her true feelings to the surface and reawakens her badly bruised inner-strength to have her fighting for their HEA.  When an opportunity to make her music dream come true arises though will she finally put her desires first or will she once again let fear hold her back?  Ripley's a likable and relatable heroine who occasionally frustrated me with her pessimistic attitude.  While I also admired her familial loyalty on one level, though it was clearly misplaced, I was happy to see her finally stand up to them in protection of Boone.  Being with Boone has her opening herself up to new possibilities and with his support and encouragement she can finally break free from the weight of her family.  Discovering the truth about her mother's murder is another burden no longer weighing on her which allowed her to finally make a name for herself, a name no longer part of a tragic legacy.

Boone and Ripley are a formidable couple with witty banter teeming with sensuality and interludes that are erotically-charged.  Ripley's an admirable heroine just trying to navigate the rocky waters of life when she meets Boone, but once they get together her life will never be the same.  Boone's the perfect boyfriend and will leave readers drooling over his perfection.  He knows from the very start that Ripley's meant to be with him and does everything he can to get her to see the same in a journey virtually angst-free that quickly solves each of the speed bumps that arise.  Surrounding this engaging main couple is a strong and entertaining cast of secondary characters.  Some are clearly more likable than others, but all of them keep the story humming along nicely. Readers get some heartbreaking background into country star Zane Frisco this time around and it definitely leaves me wanting more.  It adds a bit of tragedy to the charming and carefree persona he shows to the world and I long to see him find his own HEA after such a sad start to his entry into the world of country music.  Ripley's friend Holly is an unwavering friend, strong-willed, with a feisty attitude that would make her another great choice to take the spotlight in her own story.  On the opposite end of the spectrum is Ripley's cousin Brandy whose immensely unlikable, devious and grasping, and a stereotypical villain in her words and deeds.  Knowing everything she and her mother did throughout Ripley's life enraged me and because of that their endings weren't as satisfying as I'd hoped.  I was relieved though that the mystery surrounding the death of Ripley's mother was solved as most of this book never brought it up.  It wasn't addressed until very late in the story but it did lead to an exciting exchange between characters that had my heart racing and tied up all the threads of Ripley's past and future very nicely.  In a final small quibble I have to say that while I enjoyed parts of the epilogue, other parts regarding characters from Ms. March's other books felt out of place.  Readers who haven't read her other books will be wondering why Boone and Ripley are celebrating with strangers instead of family.  Having Zane, Holly, and Boone's family bring this dynamic duo's story to a close would've made for a much more satisfying HEA and solidified the heartwarming vibe of their commitment to each other.  Despite that omission Ms. March has crafted another entertaining romance in a duet series that proves that good things come in small packages and I look forward to where she takes us next! 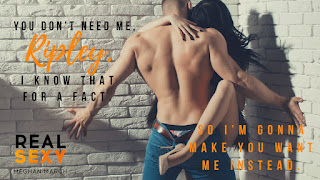 THE PREVIOUS INSTALLMENT IN THE REAL DIRTY SERIES... 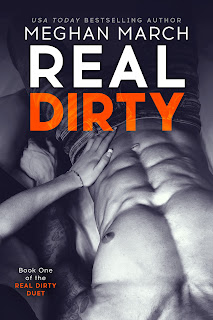 REAL DIRTY
I have everything a guy could want—a new single burning up the charts, more money than a simple country boy could spend, and a woman I’m planning to marry.
Until she doesn’t show up for my proposal.
The life I thought was so perfect, isn't.
The guy who thought he had everything, doesn't.
I’ve got my heart on lockdown, but life sends me straight into the path of a mouthy bartender who puts me in my place.
Now the only place I want to put her is under me.
I thought I was done with love, but maybe I’m just getting started. 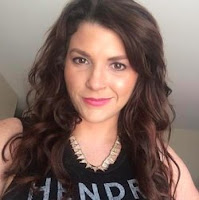 Meghan March has been known to wear camo face paint and tromp around in woods wearing mud-covered boots, all while sporting a perfect manicure. She's also impulsive, easily entertained, and absolutely unapologetic about the fact that she loves to read and write smut. Her past lives include slinging auto parts, selling lingerie, making custom jewelry, and practicing corporate law. Writing books about dirty talking alpha males and the strong, sassy women who bring them to their knees is by far the most fabulous job she's ever had. She loves hearing from her readers.