Readers will find themselves drawn to this romance full of sexual tension as a Southern Belle finds herself in a fake engagement with a football coach who's tired of being seen as a player...off the field.  Keep reading to get a tempting taste of Sweet Southern Trouble by Michele Summers, along with learning just one of the reasons why Ms. Summers loves the South, then add this romance to your bookshelf.  In honor of this battle of the sexes standalone romance make sure to fill out the form below for the chance to win 1 of 5 copies of this book too!

The best things about the South can be debated until the cows come home. For me, the list changes as often as our weather. I was born and raised a Carolina Blue Tarheel, but after college, I made my home in Miami, Florida and stayed for over twenty years (A different kind of south altogether). But since returning to my Tarheel state, it’s quite evident, some things have changed…and some things have not!
Here’s one of my favorite things about the south:
College Rivalries:  I live in the heart of the ACC and yeah, we love our football, which includes tailgating with barbeque, fried chicken, deviled eggs, pimento cheese and sweet tea. But football is kind of like the appetizer, leading up to the main course. We use football season to get in shape and start flexing our school color muscles, because what we really cut our teeth on and can cause more devastating arguments than the Presidential debates is…basketball! Make that collegebasketball. Those buzzer-beater games where we all sit on the edge of our seats, praying our team wins before we succumb to our final heart attack. Where we cheer and cry along with our favorite players and shake our fists and curse at the blind refs or coaches who call bad plays. My kids have vivid memories of being shoved in their bedrooms during basketball games, when they were little, because mommy couldn’t be held responsible for her colorful language.
We take our basketball as seriously as we take our fried chicken, NASCAR or sweet tea. 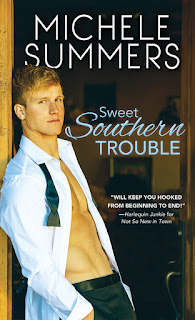 An ambitious Southern belle
Marabelle Fairchild knows she’s a gal who can get things done. Feeling unappreciated at the exclusive private school where she’s a kindergarten aide and varsity tennis coach, Marabelle determines to score with the next big fundraiser. What she doesn’t expect? A smokin' hot football coach to throw her off her game...
A reclusive NFL bachelor...
NFL coach Nick Frasier is Raleigh’s most eligible bachelor, but he wants to focus on his career…not his playboy status. He doesn’t need a smart-mouthed, pint-sized kindergarten teacher pestering him. So he cuts Marabelle a deal—in exchange for Nick sponsoring a bachelor auction starring him and his gorgeous celebrity pals, Marabelle will pose as his fiancée to ward off unwanted advances.
What could possibly go wrong?

“Coach Frasier, may I be perfectly frank?"
“Have you ever been anything else?"
Marabelle hesitated before answering. “Well, no, but I think it’s an admirable trait."
Nick bit the inside of his cheek to keep from smiling. “Then certainly don’t change on my behalf."
Blinking huge, chocolate-brown eyes, Marabelle looked more determined. Her face—sans the paint—was attractive. Faint freckles were scattered across her small, pert nose, but her mouth—by far the main attraction—had that bee-stung look that Hollywood stars coveted. For a moment, he wondered if her lips were as soft as they were full, if she tasted...
Where had those thoughts come from? She’s a kindergarten teacher, for chrissakes. He punted those unwanted thoughts right out of the stadium, and got his head back in the game by focusing on her small hands, which seemed to talk even more than her sexy, full mouth.
Marabelle paced in front of the large, white, dry-erase board. “Trinity Academy has a very important fund-raiser every spring that the whole community supports, and this year is going to be extra special, because they’re raising money to improve the football field and add two more tennis courts. And--"
Nick had heard this pitch a million times. Same setup, different location. “And you want me to contribute to the fund? Right?"
She stopped pacing. “Well, it’s more than just your money. Don’t get me wrong, your money is huge.” Nick chuckled at her lack of tact, but she ignored him, intent on lining up dry-erase markers in alternating colors.
“We need your help in contacting your celebrity friends and asking them to participate in the golf and tennis tournaments,” she said, leaning the markers against the board. “And we want you to ask the single, eligible men you know to sell themselves in our bachelor auction,” she finished all in one breath and turned, knocking all the markers to the floor.
“Um, what?” Nick shook his head as he bent to help her gather the scattered markers. This had to be a joke. “Are you secretly filming me for YouTube or something? Is this some sort of practical joke?” He’d had enough of being secretly filmed to last a lifetime, and if this fairy-tale character thought she could pull a fast one on him, she had no idea who she was up against. His gaze darted around the classroom, searching for a hidden camera. The room looked clean. Then he smirked. “Did my offensive coordinator set this up?"
Kneeling on the floor with puckered brows, Marabelle asked, “Who?"
Nick handed over three reds and two blues. “Coach Prichard. We’ve been arguing about the draft, but I didn’t think he was this upset."
Right on cue, she turned stern schoolteacher. Standing, she released the handful of markers on the metal tray, her back as straight as if fused with a goalpost. “Coach Frasier, this is not some reality TV show, and I don’t even know your offensive coordinator. But if he’s upset, I suggest you make nice, and maybe you guys will start winning some ballgames."
Splaying hands on his hips, he delivered one of his fiercest stares. “You tetched in the head or something? Are you telling me how to coach a professional football team?"
Marabelle didn’t flinch. A room full of five-year-olds must be tougher than he thought. Curling her fingers around a ruler in the metal tray as if she might rap his knuckles, she said in the same firm, schoolteacher voice, “If there’s dissension among your staff, it would be prudent to smooth things over. Arguing with your staff is bound to affect the players. It just goes to reason.” Tap, tap went the ruler in her palm.
Nick swore under his breath. Many a rookie had backed down from his most intimidating stare. Its effect was legendary. But not on crazy Marabelle. “Ms. Fairchild, you don’t know jack shit about coaching football.” Nick rarely lost his temper off the field, but she’d managed to push all his buttons. He knew his young team had struggled last season. He certainly didn’t need reminding from little Miss Muffet. He had the team’s owner, general manager, and the press for that. But Nick believed in his team. They had raw talent, and with good coaching and proper discipline, they’d only get better. Yet, it still rankled when he was confronted with their less-than-stellar record.
He didn’t need this hassle. “I’m out of here,” he muttered, starting for the door.
“Coach Frasier, please wait!"
Nick whipped around to squash the crazy, ruler-toting fairy once and for all, when three high school boys barged through the classroom door, carrying large tennis bags over their shoulders.
“Hey, Coach, you comin’ to practice today?"
“What?” The theme song from The Twilight Zone played in his head. Why would he be coming to practice here?
“Whoa! You’re Nick Frasier,” said the tallest of the boys as all three gazes landed on him.
Nick plastered on a smile, not wanting his scowl to be reported all over social media. “Hey, guys. What’s up?” All three eagerly shook his hand, talking at once. “You boys play for the tennis team?” Nick asked in between introductions and hand pumping.
“Yeah. We’re heading to practice and wondering if Coach is coming."
“Coach?” Still confused, he searched their faces.
“Surprise, surprise,” Marabelle chimed softly next to him. 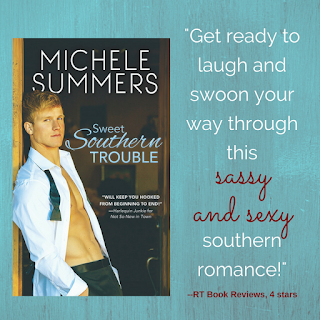 MICHELE SUMMERS writes about small-town life with a Southern flair, and has her own interior design business in Raleigh, North Carolina, and Miami, Florida. Both professions feed her creative appetite and provide a daily dose of humor.