Book Tour for Another Postcard by Elle Christensen (Review & GIVEAWAY)

As a reader obsessed with rockstar romances I found myself drawn to this tale of a charming rockstar and his attempts to win over a sultry singer carrying her own emotional baggage.  Keep reading to get a tempting taste of Another Postcard by Elle Christensen, along with my impressions of this fun and flirty romance, then add it to your bookshelf.  In honor of this first installment in the Stone Butterfly Rockstars series make sure to fill out the form below for the chance to win a $25 bookstore GC too!! 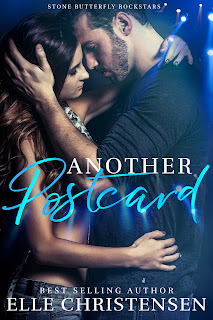 Brooklyn Hawk is an enigma. Highly sought after for her incredible voice, her talent shines bright in the studio. But a dark past and a secret she holds close to her heart keep her from permanently stepping into the limelight.
Until her favorite band offers her the chance to chase her dreams.
As the lead singer for rock sensation Stone Butterfly, Levi Matthews is wary of bringing in new talent. But he has heard just how amazing Brooklyn is and when the need for another singer arises, he’s confident that she is the perfect addition.
However, he doesn’t count on laying his heart at her feet.
But the world of music can be as dangerous as it is thrilling. Joining Stone Butterfly on tour was hard enough for Brooklyn, but when she finally succumbs to Levi’s charms, the rock ‘n’ roll life turns deadly.
Will Levi and Brooklyn keep their voices and their hearts entwined? Or will the music prove too hard to survive?


LEVI
Just inside the door, I put my hand on her arm to halt her exit.
“Dinner?"
“Nope."
“Lunch tomorrow?"
Brooklynn sighed and turned to walk away, but there was a smile flirting around her mouth.
I grabbed her arm to stop her again, pulled her inside and shoved the door shut. Walking her backward, I crowded her up against a wall. Having caught her by surprise, she didn’t protest when I dove my fingers into her hair and angled her head. I didn’t give her any time for her mind to catch up, covering her mouth with my own. She gasped, and I took advantage of the moment, my tongue entering her mouth to lick and tangle with hers. I groaned at her taste, it was fucking incredible, and I knew I was instantly addicted. Her hands had been at her sides but they slowly crept up over my chest, to hold on to my shoulders as though they were the only thing holding her up.
I combed my fingers through her hair and then they traveled down to splay across her back, pressing her body forward and flush with mine. Fuck, she felt good. My erection was on the brink of exploding, so hard it was almost painful to breathe. I had to stop before I reached a point of no return. I knew I could seduce her right out of her clothes at that moment, but she’d never forgive me. No, we’d fuck when she wanted it with a clear mind. I backed off of the kiss and then slowly withdrew completely. She was dazed and mussed up, looking like she’d just been thoroughly kissed. It was a look I hoped to see on her more often.
I cupped her face and waited until the fog dissipated from her chocolate orbs. “How about I cook you breakfast?” I grinned roguishly and winked.
“Are you kidding me?” she scoffed at my cheesy line.
I just shrugged and grinned. It was worth a shot. 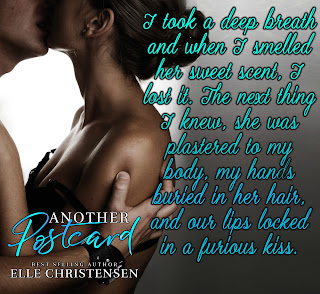 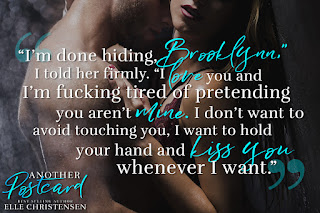 Levi Matthews seems to have it all as the lead singer of alternative rock band, Stone Butterfly.  He's sexy, charming, with a killer voice and body, and despite the typical behaviors of many rockstars...he's not a player.  He's not a partyer, and isn't fodder for the tabloids as he's a truly nice guy who cares deeply for his family and is protective of those he loves.  The moment he meets Brooklyn Hawk though he knows he has to have her.  She doesn't make it easy though as they undertake a dance of flirtiness and sexual tension as he uses all his manly wiles to win her over.  Their romance is erotically-charged as seen through numerous scorching encounters that overheated my iPad.  Through it all he's sweet and endearing as he treats Brooklyn like a queen and her sister as his own.  When an obsessed fan starts sending threatening postcards though, his protective side kicks in as the story races to discover the true culprit before he and Brooklyn pay the ultimate price for falling in love.

Brooklyn's youth was one of physical and mental abuse from her parents before a grisly act took both of them away.  Her and her sister, Baylee, had only each other to count on during that time but it left both of them with a heavy emotional load to carry.  Because of her sister's mental deficiencies Brooklyn's always stayed close to her side, devoting herself to Baylee completely and keeping her own life in the background.  Because of her angelic voice though, she's been able to carve out a place in the music world that has her in high demand as a back-up singer and brings her into the inner circle of Stone Butterfly and the sweet and sensitive Levi.  With her sister's needs, and her negative feelings regarding opening your heart to love, she spends half of the book turning him down.  I was actually shocked when she finally gave in to him and was even more surprised by how much she sacrificed to be Baylee's whole world.  Being with Levi gives her time to spread her wings, play a larger role in making music, and gain even more notoriety for her music talent.  Baylee's never far from her thoughts as much time is spent with her child-like sister, with Levi by her side, to charm me with their familial interactions.  Brookyn's an admirable heroine for all she's sacrificed for Baylee, but unfortunately her kindness blinds her to certain truths.  Just as danger gets ever closer she and Levi have a melodramatic misunderstanding that leaves her vulnerable and open to even more pain in an ending that was kept a clever surprise (though I had seen it coming).

This story started out very slowly as Brooklyn and Levi danced their sensual dance, their frustrating tug-of-war where he did all he could to get her to go out with them.  Even after they got together Brooklyn still wanted to keep Levi her dirty little secret so as not to upset Baylee.  Too much of Brooklyn's life was spent in worry over her sister and it's not until the close-knit members of Stone Butterfly made her a part of their family that she finally started to live.  Baylee's issues are serious and the author didn't sugarcoat any of the hardships her disability had on Brooklyn.  Another area the author handled well was the behind-the-scenes of the music world, from recording albums to going on tour. It's a lengthy process that allowed Brooklyn the time to form a deep connection to Levi and more fully immerse me in their dramatic journey to HEA. Surrounding this compelling main couple was a colorful and diverse group of secondary characters.  From bold and outspoken bandmate Sasha whose clashes with Cooper are sexually-charged to the sexy and mysterious Matteo and Noah.  They're an eclectic group that I definitely hope to see more of in the future!  Despite a slow start this book ramped-up to an exhilarating finish that offered a surprise or two along the way along with a Big Misunderstanding and a Grand Gesture that showed Levi to be the quintessential book boyfriend.  All this adds up to a romance that readers will want to get their hands on!

I’m a love of all things books, a hopeless romantic, and have always had a passion for writing. Between being a sappy romantic, my love of an HEA, my crazy imagination, and ok, let’s be real, my dirty mind, I fell easily into writing romance.
I’m a huge baseball fan and yet, a complete girly, girl. I’m an obsessive reader and have a slight (hahaha! Slight? Yeah, right) addiction to signed books.
I’m married to my very own book boyfriend, an alpha male with a sexy, sweet side. He is the best inspiration, my biggest supporter, and the love of my life. He is also incredibly patient and understanding about the fact that he has to fight the voices in my head for attention.
I hope you enjoy reading my books as much as I enjoyed writing them!