Book Spotlight on The Gunslinger’s Vow by Amy Sandas (GIVEAWAY)

A young woman ready to leave her past behind finds herself in the company of a man looking for revenge as they brave the Wild West to get back home with romance blossoming along the way.  Keep reading to get a tempting taste of The Gunslinger’s Vow by Amy Sandas, then add the western historical romance to your bookshelf.  In honor of this first installment in the Runaway Brides series make sure to fill out the form below for the chance to win 1 of 5 copies of another of Ms. Sandas’s other western historical romance novels too! 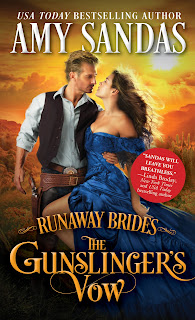 Three runaway brides
Determined to escape their fates
Flee West to find freedom that can only be had in a cowboy’s arms...
Alexandra Brighton spent the last five years in Boston, erasing all evidence of the wild frontier girl she used to be. Before she settles down, she’s determined to visit her childhood home one final time. But when she finds herself stranded far from civilization, she has no choice but to trust her safety to the tall, dark and decidedly dangerous bounty hunter Malcolm Kincaid.
Now that Malcolm finally has the location his brother’s killer, he has no intention of wasting time protecting a pampered Eastern lady. But something about Alexandra speaks to the heart he long thought frozen—and her slow transformation from proper miss to wild-eyed beauty leaves him shaken. By the time they reach Montana, Malcolm must decide if seeking justice for past wrongs is worth losing a future with the woman he never expected to need…

Alexandra Brighton came to a swift halt four steps into the Painted Horse Saloon. Blinking a few times to adjust to the dim interior, she took a measured look around.
As saloons went, it was nothing special. Not that Alexandra had seen many—or any, to be honest.
Despite the early hour, the place was busier than expected. Three men stood in hushed conversation as they leaned against the bar running the length of the wall to her left. Several tables filled the open area to the right, where two separate card games were in progress, and narrow stairs toward the back led up to a closed second floor. An upright piano that looked like it hadn’t been touched in years stood lonely in the shadows by the stairs.
Upon her entrance, everyone turned to stare at her, yet only a handful of the men bothered to scrape to their feet. Their expressions, ranging from mildly curious to outright covetous, reminded her of what she already knew: a saloon was no place for a lady.
Alexandra steadied her chin as she stared coolly back. She did not have the luxury of fear. That would have been handy before she had left Boston. But now, she was too far from the place she’d called home the last five years to go back.
Her only option was to go forward.
Preferably as quickly as possible.
All she needed was one good man. One noble, honorable man who could escort her to Montana while keeping her free from harm. Was that too much to ask?
She feared it was, but Alexandra was low on options. And funds.
The stagecoach out of Rock Springs, Wyoming, was inoperable due to required repairs, leaving Alexandra in desperate need of another way to get to Helena. When the blacksmith mentioned a bounty hunter in town who was heading in that direction, she didn’t stop to think about it—just headed off to the saloon where the man was said to be catching some respite.
It had been a long time since her reckless will had landed her in trouble, yet here she was, standing in the middle of a filthy saloon while men of all varieties stared at her in a way that made her feel like a sheep who’d wandered into the midst of a wolf pack.
Stiffening her spine and reminding herself of her purpose, she scanned the room again.
One of these men had to be the bounty hunter.
The longer she stood there, the cruder the gazes became. The nerves running along her spine prickled, and her palms started to sweat in her fine gloves. Time to see her business done so she could get herself out of there.
“Which of you is the man called Kincaid?” she asked in a tone that cut uncomfortably through the humming quiet that had taken over the place.
She hadn’t intended to sound so imperious, but her courage was slowly ebbing away, and her voice tended to sharpen in compensation for a lack of confidence.
More than a few men glanced away, refocusing their attention on their drink or their card game or whatever conversation they had been in before her interruption. Others eyed her with a new level of curiosity or an odd dose of wariness.
No one answered.
She opened her mouth to repeat her question when the bartender, an aging man with a bald head and rotund belly, caught her eye and gave a sharp jerk of his chin toward a man standing in the shadows at the far end of the bar.
Bolstering her nerves, Alexandra started forward with long strides that caused her many-layered skirts to snap against her heeled boots. The stranger appeared as rough as the other men in the place, but there was something about him—something in the way he held himself—that struck her acutely even as common sense urged her to be extra wary.
Though he hunched forward to rest his elbows on the bar, there was no mistaking his height, or that his shoulders were broad and strong beneath his dark duster coat. A good layer of dirt covered everything from his scuffed boots to the bandana around his neck and the wide-brimmed hat tipped low over his face, supporting the fact that he’d just ridden into town.
It was more than his intimidating size and trail-worn appearance that set this man apart, however. Despite his relaxed posture, he seemed ready for action. And if that were not enough, he was the only person in the whole place who had not given her a second glance. He appeared intent on ignoring her and everyone else.
And everyone else seemed equally determined to ignore him.
If she were a sheep, and the saloon’s occupants were a pack of wolves, then this man was the alpha.
Her steps faltered. What kind of stupid sheep walked right up to the alpha wolf?
Apparently, this one did. 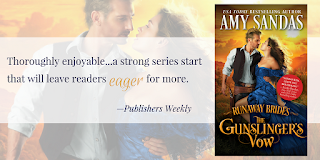 Amy writes historical romance about dashing, and sometimes dangerous, men who know just how to get what they want and women who at times may be reckless, bold, and unconventional, but who always have the courage to embrace all that life and love have to offer.
Amy grew up in a small dairy town in northern Wisconsin and after earning a Liberal Arts degree from the University of Minnesota – Twin Cities, she eventually made her way back to Wisconsin (though to a slightly larger town) and lives there with her husband, three children and a black lab. She spends her early mornings writing then heads to her “other” job, dreaming of the day she can write full-time. The rest of her time is spent trying to keep up with the kids and squeeze in some stolen moments with her husband.