A once-a-month tryst suddenly takes an unexpected turn when names and feelings get in the way of carefree encounters.  Keep reading to get a tempting taste of Inked Nights by Carrie Ann Ryan, a contemporary novella where the past affects a couple’s hopes for the future.  You’ll also get my impressions of this sensual read which will have you wanting to add this eighth installment in the Montgomery Ink series to your bookshelf! 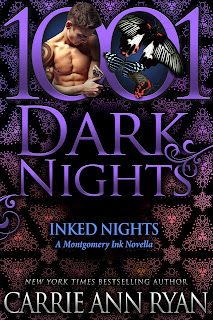 Tattoo artist, Derek Hawkins knows the rules:
One night a month.
No last names.
No promises.
Olivia Madison has her own rules:
Don’t fall in love.
No commitment.
Never tell Derek the truth.
When their worlds crash into each other however, Derek and Olivia will have to face what they fought to ignore as well as the connection they tried to forget. 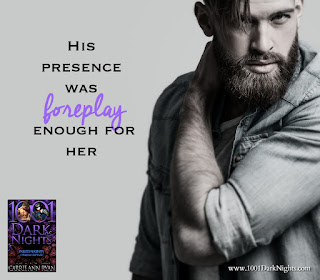 Four years of once-a-month carefree encounters come crashing to a halt with the discovery of a name, and the unexpected connection surrounding that name, in this engaging novella.  As readers are once again brought into the world of the close-knit Montgomery family emotions are boldly bared with the past making a profound affect on the future.  From the first page to the last readers will be left hanging in the balance, waiting for this conflicted couple to be brave enough to put their hearts on the line to reach HEA.

Derek’s become addicted to his monthly encounters with the woman he knows only as O, but lately he’s been wanting more.  Where once their short time together left him satisfied, he’s now left feeling frustrated with longing.  With all his friends and co-workers pairing off, seeing the Montgomery’s happy and complete with their significant others, has him wanting that for himself and making the decision to change the rules by giving O his name.  It’s a moment that changes everything by opening up their painful pasts and reminding them of a connection that time had erased.  With their future HEAs left in doubt, Derek will have to stand up for what his heart wants and convince O that their future is more important than the past in this quick yet satisfying read.  Derek’s an appealing hero, what little bits we see of him as this novella doesn’t dig too deeply into either of their lives.  He’s a devoted son carrying a lot of guilt while dealing with his mother’s unending grief which leaves little time for his own happiness.  His encounters with O were a respite from it all and he soon wants the feelings she engenders in him for more than just one night and is willing to sacrifice everything to claim her wholeheartedly.  His bold actions left me cheering, as did his quick turn-around from her surprising reveal to once again put his heart in her hands.  He’s a delicious hero, sexy in his looks and sweet with his words, and he’s was a definite highlight of this story.

Four years ago Olivia’s unpleasant blind date ended with her drinking alone in a hotel bar.  That moment changed everything though as it introduced her to a burly, sexy, tattooed man known as D.  Their satisfying and unforgettable night together set them on a path of once-a-month encounters that started out casual but have slowly become more profound in the feelings both of them are left with in the morning.  When D unexpectedly changes the rules, their future is left in doubt as her painful past collides with his to taint what they have now and what they could have in the future.  Readers will be left hanging too as both of them work through the painful truth to decide if they can have a future beyond their once-a-month interludes.  Olivia’s a likable heroine who lives a solitary life revolving around books.  She’s formed few connections as a childhood tragedy left her heart broken and unwilling to open herself up to more pain.  Being with Derek was the one time she opened up her heart to someone else and it was a freeing sight to see full of happiness and sensuality.  Being with Derek also brings her into the warm embrace of the Montgomery family, gives her the chance to form more connections outside of the imaginative world of books she escaped to.  On a whole I liked Olivia and was rooting for her to put aside her unnecessary childhood guilt to make a HEA of her own.

This was a quick read, a satisfying one full of heart with a nice dab of sexiness. The issue that arose between them was a bit overblown though, especially in Olivia’s mind, but the issue was thankfully resolved quickly in a way that warmed my heart courtesy of the delicious hero.  The main couple was immensely likable with interactions full of heartfelt banter as well as unrelenting sensuality whenever they were next to each other and I was rooting for them every step of the way.  They were a seamless addition to the Montgomery family and I enjoyed seeing the familial vibe surrounding all these characters to make this an enjoyable addition to this long-running series.  It’s a tale that ultimately made for an afternoon full of delights that I recommend to fans of Ms. Ryan as well as those those looking for a story with a nice bit of substance and style.