A woman and man both hiding from their lives find themselves drawn to each other in this compelling historical romance.  Keep reading to get a tempting taste of Runaway Heiress by Syrie James, then add this this heartfelt tale to your bookshelf.  In honor of this first installment in the Dare to Defy series US readers can visit the link below for the chance to win a print copy of The Lost Memoirs of Jane Austen by Ms. James too! 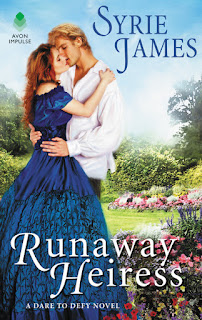 When a runaway heiress runs into trouble, she may end up exactly where she belongs...
Brainy and college-educated, American heiress Alexandra Atherton will do anything to avoid marriage to the English peer her mother has chosen for her--even abandon the life of privilege she's always known. But as her escape goes horribly wrong, Alexandra must invent a new identity to gain the help of a handsome stranger.
Thomas Carlyle, the Earl of Longford, sweeps in and out of London disguised as a humble artist, earning just enough to keep his ancestral Cornwall estate afloat. When Alexandra crashes into his life, she awakens feelings and desires that he vows will stay buried. Despite himself, he needs this beautiful newcomer, for his sisters have run off another governess.
Alexandra is surprised to find she thrives in her new position at Longford's home. But as she grows closer to Thomas and his sisters, and her relationship with the emotionally guarded earl unleashes their hidden passions, the truth Alexandra's been forced to hide may end up coming between her and the only man she's ever loved.

“One first-class ticket for Liverpool, please.” Alexandra Atherton managed a smile for the ticket agent behind the window.
“One way or return?”
“One way.” Alexandra anxiously made her way across the busy train station, hardly able to believe she was doing this: running away, dressed in her maid’s old clothes, bound for Liverpool and the steamship that would take her home.
Her escape, she knew, would cause something of a scandal. Over the past few years, whenever her name or one of her sisters’ names had cropped up in the press, it was always followed by “the American heiress,” or “the daughter of multimillionaire banking tycoon Colis Atherton.” As if they were not actual people in their own right.
Alexandra hated to feed the gossip, but after last night, what choice did she have?
She had left a note explaining where she’d gone and why, which her maid Fiona was to “accidentally discover” later that afternoon. By then, it would be too late for her mother to prevent Alexandra from sailing. She just prayed that upon her reaching Liverpool, a berth would be available aboard the Maritime.
The train platform was alive with the clamor of movement and conversation. Gentlemen in black frock coats and ladies in elaborate plumed hats darted to and fro, checking the printed timetables, studying the large clock hanging from the rafters, purchasing apples from a vendor and papers from the newsstand. As Alexandra wove through the crowd, she heard a high-pitched voice at her elbow: “Got a penny for a poor orphan?”
She paused. Before her stood a raggedly dressed, dirty little girl. Alexandra’s heart went out to the creature, who gazed up at her with wide eyes, her hair all in a tangle.
Alexandra wondered how a penny could possibly be of any help to a child in such need. Withdrawing her coin purse from her reticule, she offered the child a shilling. “Here you go, little one.” Suddenly, more children in similarly dirty clothing appeared and crowded around her.
“Mine!” cried a boy.
“No, mine!” cried another.
A grubby fist flashed out and snatched the shilling from Alexandra’s grasp. She couldn’t tell if it was the first girl who took it or one of the boys; indeed, she wasn’t entirely sure what happened next. All Alexandra knew was that multitudes of small, filthy hands were striking at her as young voices erupted in raucous shouts. Her coin purse was suddenly wrenched from her grasp, and a second later her handbag was gone.
“Wait! Give it back!” Alexandra cried, as the flock of children fled. “Help! Stop those children! They’ve stolen my bag!”
No one made any move to help her. Alexandra pushed her way through the crowd, racing after the children, but the ragamuffin band vanished as quickly as it had appeared. At the end of the platform, she stopped to catch her breath. The whole incident, she saw now, had been cleverly played, the efforts of a pack of urchins who preyed on unsuspecting travelers.
She searched for a policeman (what did they call them here? Bobbies?), but realized that even if one materialized, she couldn’t report the theft. She was dressed as a servant, in the act of running away.
Alexandra stood rooted to the spot, overwhelmed by a crushing sense of horror and disappointment as the depths of her predicament became clear to her. Her handbag was gone. It had held all her money as well as her train ticket. She hadn’t been able to take anything else with her, and now had nothing left except the clothes on her back. Clearly, there would be no trip to Liverpool today, and no voyage to New York.
Tears stung Alexandra’s eyes as she made her way back through the train station. What should she do now? 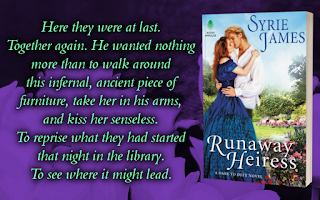 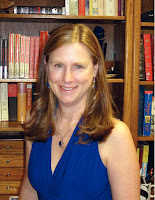 Syrie James is the bestselling author of the critically acclaimed Nocturne; Dracula, My Love; The Secret Diaries of Charlotte Bronte (Great Group Read, Women's National Book Association; Audie Romance Award, 2011), and the international bestseller The Lost Memoirs of Jane Austen (Best First Novel 2008, Library Journal.) An admitted Anglophile, Syrie loves paranormal romance and all things 19th century. She lives in Los Angeles and is a member of the Writer's Guild of America. 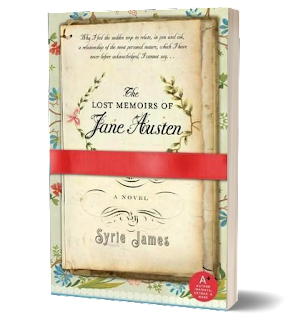