It’s a combustible romance that flares between a single mom and an ex-SEAL when they engage in a sensual game of tug of war that takes a suspenseful turn when her past comes back to haunt her.  Keep reading to get a tempting taste of The First Time at Firelight Falls by Julie Anne Long, then add this crackling small town romance to your bookshelf.  In honor of this fourth installment in the Hellcat Canyon series make sure to visit the link below for US readers to have the chance to win 1 of 5 print copies of the first book in this series too! 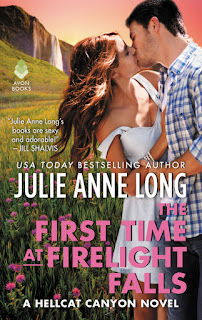 Single mom Eden Harwood has a lively daughter, a blooming business—and a juicy secret she’s hung on to for ten years. She doesn’t mind a bit that there’s no room for romance in her whirlwind life . . . until six-foot-infinity, smoldery-eyed, bass-voiced Gabe Caldera reminds her of what she might be missing.
The principal of Hellcat Elementary is usually knee-deep in fawning PTA moms, but Gabe only has eyes for the fiery, funny, skittish redhead who barely knows he’s alive. But this ex-Navy SEAL never fails to get what he wants. And what he wants is to fan those sparks between him and Eden into the kind of bonfire you can see two counties away.
The passion is explosive . . . and the tenderness has them thinking about forever. But when Eden’s past waltzes into town for a reckoning, her secret blows them apart. Still, Gabe will never back down from a fight . . . especially if the ultimate prize is Eden’s heart.
EXCERPT:

She was a devil woman.
“I’ll kiss anything you want me to.” He made it sound like a blood vow.
She gasped when he slid his hand up through her hair and held her fast. This time he went in for a take-no-prisoners kiss, designed to melt bones, stop time, erase the memories of all kisses that had come before, what-the-fuck-did-they-have-to-lose kind of kiss. Molten, savage, skillful. They were on the clock.
He was a guy who knew how to make a point, and he never half-assed anything. Clearly, neither did she. Silk, heat, tongue, lips—the taste of her roared through his bloodstream, tightened all his muscles.
He curled one hand into the edge of his desk, a reflex against floating up to the ceiling, because suddenly whatever boundaries he’d once had melted away. And damn, she gave as good as she got. It was a hot, deep, dangerous tangle of tongues, the slide of lips. When she moaned softly, low in the back of her throat, guttural, helpless pleasure, he slipped his hand from her hair and sank backward into his chair.
One second before the bell rang. 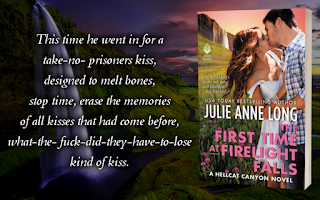 USA Today bestselling author JULIE ANNE LONG originally set out to be a rock star when she grew up (and she has the guitars and fringed clothing stuffed in the back of her closet to prove it), but writing was always her first love. Since hanging up her guitar for the computer keyboard, her books frequently top reader and critic polls and have been nominated for numerous awards, including the Rita, Romantic Times Reviewer’s Choice, and The Quills, and reviewers have been known to use words like “dazzling,” “brilliant,” and “impossible to put down” when describing them. Julie lives in Northern California. 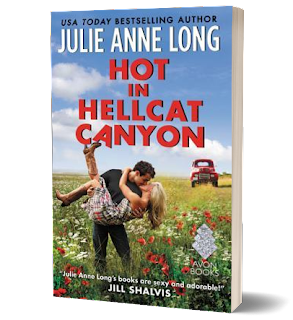