Book Blitz for Hung Up on You by Marie Landry (GIVEAWAY)

A weekend getaway turns unexpectedly romantic when a single gal gets paired off with a guy still hung up on his ex, but as they spend more time together in a fake relationship, things start to turn oh so real.  Keep reading to get a tempting taste of Hung Up on You by Marie Landry, then add it to your bookshelf.  In honor of this stand-alone romance make sure to fill out the form below for the chance to win 2-$10 Amazon GCs too! 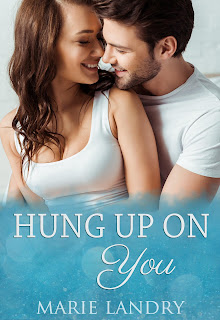 Julia is single and happy, thank you very much. Try telling that to her happily-coupled bestie, though. She’s so determined to pair Julia off, she brings an extra guy friend along on a weekend getaway, in what’s clearly a set-up attempt. Julia’s interest is immediately piqued by sweet, sexy, nerdy Zack. There’s just one problem: he’s still hung up on his ex. Big time.
Despite knowing that – and despite her attraction to him – it doesn’t stop her friends from throwing them together every other second, insisting they’d make the perfect couple. But Julia is determined to friend zone him. At least until he suggests they pretend to date to get their respective friends off their backs.
At first, their fake “dating” is more friendship than fireworks. But as they get closer, the lines begin to blur between them, and Julia realizes she has to either shut down her developing feelings for Zack or let him in. The question is: can she fully trust him with her heart? Or does his heart still belong to his ex?

If I thought sitting in the car together was intimate, it was nothing compared to sitting side by side in a dark theater. Even though we were alone then and we’re surrounded by people now, there’s something about sitting here in the dark with parts of our bodies touching, albeit in an innocent way. If I moved my pinky just the tiniest bit to the left, it would brush Zack’s.
Now it’s all I can think about. My hand twitches despite my attempts to keep it still, and my pinky rubs against Zack’s. He gives a small jolt, as if I shocked him. I almost yank my arm back, and even consider sitting on my hand to prevent myself from further contact. But then I realize Zack hasn’t shifted away. He hasn’t looked at me, either. It makes me wonder if he’s as aware of me as I am of him. That’s ridiculous, though. Isn’t it?
A second later, his pinky brushes mine. The barest hint of a smile flirts around his mouth. He must know I’m watching him, yet his eyes stay trained on the screen ahead. Our pinkies are doing a little dance now, tentatively rubbing against each other until his finally hooks around mine, holding on. That giddy teenager feeling I sometimes get when I’m around Zack returns full force. Our pinkies stay locked together, reminding me of the pinky promises my brother and I used to make. Except those were innocent fun, something we used to swear by over silly things, and this...this feels anything but innocent or silly. It’s the barest contact, and yet it feels weighty.
Zack’s head turns slowly and he finally looks at me. The scene on the screen changes to an outdoor shot, momentarily lighting his features, giving me a short yet perfect view of the soft, almost questioning smile on Zack’s face.
“You’re missing the movie,” he whispers.
I almost tell him I’d rather look at him anyway. Instead, I nod once and return my attention to the screen. I have no idea what’s been happening and my mind is too muddled to even care. I feel Zack’s eyes on me for a moment longer before he looks back at the screen. Our hands stay as they are for the rest of the movie.
When the four of us emerge from the auditorium, blinking in the light like a quartet of moles, Dee asks, “So what did you think?”
I catch Zack’s gaze. “New favorite.”
His lips twitch. “Same. Great movie. Solid four stars.”
Dee arches a brow as she glances between the two of us. I wonder what my expression is. I feel slightly flushed, which means my cheeks are probably rosy. Can she tell I’m barely containing a goofy smile? 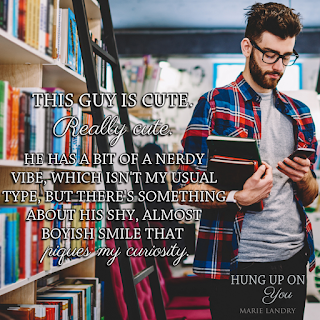 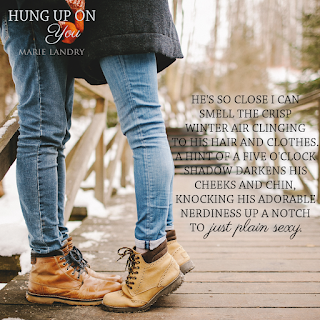 Marie Landry's life revolves around books; when she's not writing them, she's reading them, taking pictures of them for bookstagram, or blogging about them. An avid reader from a young age, she loves getting lost in characters' worlds, whether they're of her own making or someone else's. She particularly loves coming-of-age stories with as much of an emphasis on self-discovery as on romance...but don't leave out the romance!
When not doing bookish things, Marie can be found daydreaming (in general, but often about traveling through Europe), marathon-watching shows on Netflix, and taking photographs. She lives in a cozy apartment in Ontario, Canada with the best roommate ever, and only sometimes imagines it's actually a flat in London.